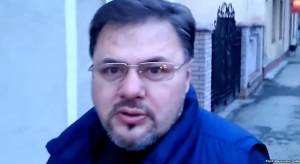 Any lingering hopes that Ukraine’s Security Service [SBU] really did have grounds for arresting controversial blogger Ruslan Kotsaba were dashed on Monday when the indictment was made public.  As feared, the charges of state treason and obstructing the work of the armed services are based solely on a video in which he opposed the mobilization drive in Ukraine, on his cooperation with Russian pro-Kremlin media and, effectively, expression of his views.  Very many of us disagree strongly with Kotsaba’s views and are revolted by his collaboration with media engaging in propaganda, not journalism.  Nonetheless, there need to be serious grounds for accusing a person of state treason, a charge carrying a sentence of 12-15 years imprisonment.  There appear to be none.

The indictment was posted by well-known lawyer Tetyana Montyan who says that since it has been passed to the court, the trial could be about to begin.

As reported,   Kotsaba, who has been in detention since his arrest on Feb 7, is charged with the crimes falling under Article 111 § 1 of Ukraine’s Criminal Code (state treason) and Article 114-1 § 1 (espionage, although in this case, he is accused of obstructing the lawful activities of the Armed Forces and other military formations).

In fact, the video had been watched by an extremely modest number of people until the SBU made its author so famous and led to his views being heard by close on 400 thousand viewers.   There is certainly no evidence that it had any impact on the level of mobilization, yet the prosecution is claiming that it falls under Article 14 as being ‘subversive activities obstructing the armed forces”.

An additional issue here is that there are other Ukrainians who are in no doubt that Russia is the real aggressor but who believe the mobilization waves to be legally questionable given that Ukraine has not formally declared a state of war.

Kotsaba’s willingness to collaborate, whether for remuneration or for free, with Russian channels whose warmongering propaganda and distortion of the facts have finally led western countries to agree to countermeasures, may be viewed by many of us as reprehensible.

That does not make them state treason.

His assertion that “there are almost no regular Russian forces in Donbas” and that it is local guys who are killing other local guys can be refuted.  It has been on many occasions – in the film by slain Russian opposition politician Boris Nemtsov (https://youtube.com/watch?v=vfFhnqw0sE8 ; by other courageous Russian politicians and human rights activists; in report after report from NATO, the US State Department; by Amnesty International and many others.

Shortly after Kotsaba’s arrest, the Independent Media Union of Ukraine issued a statement expressing concern about the dangerous precedent that his detention creates.

The Union stated that better reasons needed to be provided to warrant the charges laid.

Instead the prosecution has come up with dubious charges that will do far more damage to Ukraine and its credibility as a democratic country than the harm caused by one blogger, however widely quoted by the Russian propaganda machine.