Crimean Tatar Leaders ‘”Warned” Not to Protest as Media Silenced 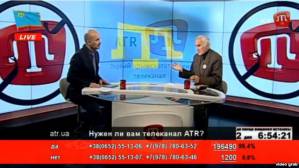 With less than one day remaining before TV channel ATR and other Crimean Tatar media are likely to be silenced in Russian-occupied Crimea, two Crimean Tatar leaders have been warned of the consequences of ‘unauthorized’ demonstrations in defence of the channel.

On Monday evening Nariman Dzhelyal, First Deputy Head of the Mejlis, or Crimean Tatar representative assembly, received a visitation from a representative of the prosecutor’s office and from the Centre for Countering Extremism.  They read out a warning against any organization or participation in “unauthorized protests” linked with the possible silencing the TV channel ATR.  As has been the case with all such ‘warnings’, the officials refused to leave a copy.

Throughout March 31, ATR is holding an Open Day with all those wishing to show their support welcome to visit the studios, speak with members of the ATR team.  There is also a marathon underway entitled “Do not destroy [lit: kill] ATR!”.

It is unfortunately very likely that this will be the last day that this unique Crimean Tatar television channel – the only such channel in the world, and one of immense significance for Crimean Tatars – will be able to broadcast while Crimea is under Russian occupation.

All Crimean media must have re-registered according to Russian legislation before April 1.  They will be in breach of the law after that and would face immediate fines, confiscation of property, and likely criminal charges against the management and journalists.

As feared, this requirement has been used as a means of silencing the last remaining independent media in Crimea.

It is very likely that from Wednesday the following media will fall silent in Crimea:

The Crimean News Agency QHA  (the only one to have received a formal rejection of its application for re-registration.

Sergei Aksyonov, the leader installed when Russian soldiers seized control in Crimea, has made his position clear, that channels like ATR are an “enemy element” which have no place.

Since most Ukrainian media were cut off and are now blocked in Crimea, it is quite clear that it is freedom of speech and independent views that the Russian occupation regime will not tolerate.

More details here: Do Not Let Crimean Tatar ATR and Media be Silenced!