Dramatic increase in number of Russians who justify Stalin 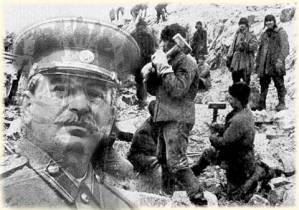 Would there be such lack of interest if 45% of Germans thought Hitler's crimes 'justified' by Nazi Germany's achievements?

15 years after Vladimir Putin first became President of Russia, a survey has found that Russians’ attitude to bloody Soviet dictator Joseph Stalin has changed significantly.  Changed in the more ‘positive’ direction that history teachers were first told was required back in 2007.

According to a Levada Centre survey entitled “Stalin and his role in the history of the country”, at the beginning of the 2000s, the majority of Russians still viewed Stalin negatively.  In March 2015, 39% viewed him in a positive light, with 30% of these respecting him; 7% liking him; and 2% - admiration.

There were clear divisions according to age, location and standard of living.  Half of younger respondents were indifferent to Stalin, whereas older respondents (43%) were more inclined to view Stalin with respect.  People in cities, and those with a higher standard of living are more likely to view Stalin with fear, antagonism or hatred than people living in rural areas, and those who are poorer.  Every second respondent in Moscow, for example, was against a monument being erected to the dictator, while Russians over 55, those poorer, living in rural areas, and / or with lower education were most in support of the idea.

If in 2010 one in three Russians considered Stalin a state criminal, now only one in four believe this, though the figures were different for Muscovites (51% saying he was a state criminal); the more affluent (62%) and those with a higher education (33%).

Since 2012 the percentage of respondents viewing the sacrifices which the Soviet people made during the Stalin period as justified by high aims and the results achieved has jumped from 25% to 45%.   64% of Muscovites, however, and 66% of those more affluent answered that no results, regardless of their aim, could justify the sacrifices.

It is worth noting that 2012 was when Putin was ‘re-elected’ for his third term as President.  In early 2012 there were huge demonstrations in major cities against his re-election and many in the West had begun talking of a ‘Russian Spring’.  The protests led to a major crackdown with many people imprisoned.  Over the years in question, but especially since early 2014, government-controlled media in Russia (for the majority of the population all that they have access to) has become full of virulent propaganda against Ukraine and now the West, with the hardships Russians are facing, when mentioned, treated as part of a war being waged against Russia.

Interestingly, 69% of respondents were against Volgograd once again being called Stalingrad. As reported, Putin effectively suggested his support for such a move last June.

In June 2007, Putin told a congress of history teachers that ‘positive moves’ were needed in the presentation of Russian history.  He said that you could read things in history books which make your hair stand on end.

A new history manual for teachers, written by Alexander Fillipov, spoke of Stalin as “one of the most successful leaders of the USSR”.  The book asserted that “in essence, the aim of Stalin’s domestic and foreign policy was the restoration – political and territorial of the Russian Empire”.   It claimed that historians at home and abroad confirm that the main victims of repression from the 1930s to the 1950s were the ruling class, and are “inclined to see rational reasons for the use of force in the efforts to ensure the maximum effectiveness of the ruling elite as the main player in mobilizing society towards the achievement of impossible tasks”.

“The outcome of Stalin’s purges was the formation of a new governing class, able to cope with the task of modernization given the shortage of resources – unwaveringly loyal to the upper echelons of power and irreproachable from the point of view of executive discipline”.

A museum dedicated to Stalin is to be opened in the village of Khoroshevo (Tver oblast) where Stalin stayed overnight in August 1943 on his way to an area within safe distance from the front.    As reported here, the initiative came from the Russian Military History Society, a body created by Putin on Dec 29, 2012 “for the purpose of consolidating the forces of state and society in the study of Russia’s military-historical past; countering efforts to distort it; popularizing the achievements of military-historical studies; developing patriotism and raising the prestige of military service”.

In the meantime, the Perm-36 Museum in the Urals, at the site of the Soviet harsh regime labour camp where Ukrainian poet Vasyl Stus died, has been turned into a travesty.  The Museum had up till recently played a vital role in informing the public about Soviet repression, but the Perm-36 Memorial Centre which ran it was basically driven out.  This centre, an NGO, issued a statement , promising that its work would continue, but saying that its efforts to reach agreement with the Perm regional authorities to retain Perm-36 as a museum of political repression in the USSR had proved fruitless.  Since then the Centre has reported that it is facing a check into whether it should be forcibly registered as a so-called ‘foreign agent’.

There is a museum still at the site, but one in which the camp’s role in repression is scarcely mentioned –  “the words "Stalin, " "dissident, " or "gulag" are nowhere to be seen”.

It is doubtless indicative of the West’s lesser knowledge of Stalin’s crimes that all these surveys, monuments to the dictator and distortions of history are either not reported at all, or given fleeting coverage.  One wonders how they would react if Germany were to come up with 45 % justifying Hitler’s crimes.  Surely worth considering when this sharp increase in willingness to justify horrific crimes comes at a time when Russia has annexed part of neighbouring Ukraine and is showing no intention of stopping.