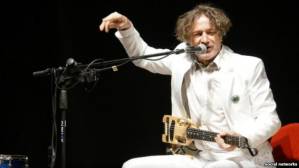 In spite of serious human rights violations by the occupation regime in Crimea and international sanctions, Serbian musician Goran Bregović has held a concert in Sevastopol where he praised Russia’s greatness and expressed the hope that the West would be “cured of its paranoia”.

After his concert on March 26, Bregović was asked by journalists if he was not frightened of a boycott.  He answered that he was totally unbothered by sanctions.

“I don’t care.  At any rate, in the Balkans we have always felt the greatness which comes from the east from Russia.  I think that the West has always expressed some kind of paranoia about this.  I hope it will pass and they’ll come up with some kind of medicine against it.”

Since Russia annexed Crimea a year ago, Crimean Tatar leaders and other opponents of Russian rule have been banned from their homeland or arrested.  A number of civic activists and young Crimean Tatar men have disappeared and have likely been killed, like Reshat Ametov whose mutilated body was found after he was seized from his lone protest against Russia’s invasion.  Even holding a Ukrainian flag has resulted in court sentences, and accusations of ‘extremism’.

Bregović’s concert was held as the last independent media in Crimea, including the only Crimean Tatar TV channel in the world, were being silenced.  As three Crimeans who expressed their peaceful opposition to Russian rule, including film director Oleg Sentsov, await trial and likely 20-year prison sentences on totally fabricated ‘terrorism’ charges in Moscow.

It is not clear what ‘medicine’ Bregović was thinking of, nor what other violations his effusive admiration for Russia’s “greatness” blind him to.

His appearance in Sevastopol has already resulted in the cancellation of a concert scheduled for May 16 in Kyiv, and it is to be hoped that other concerts will also be cancelled.

Not only in Ukraine

Bregović is due to appear at the Life Festival Oświęcim, in southern Poland in June 2015.  This annual festival takes place near the Nazi death camp Auschwitz-Birkenau, and is a music festival with a message: of peace and rejection of racism and anti-Semitism.   The festival’s partners include the Auschwitz Jewish Centre; Amnesty International and Poland’s Ministry of Culture and National Heritage.

There is no place for Goran Bregović at this event, and all efforts should be made for his invitation to be withdrawn.

It would be appropriate for other countries to consider similar moves against a person who has shown such arrogant disregard for both international law and the suffering and violations which have already resulted from Russia’s invasion and annexation of Crimea.