ATR was forced off air on Tuesday night after Russia “shot at the soul of the Crimean Tatar people” by refusing to re-register this unique television channel and other Crimean Tatar media.  Hundreds of people gathered outside the studio during the day, many obviously distressed.  They were videoed by police officers, but there were no detentions, unlike the previous day when 7 students and one other person were detained while trying to make a video clip in support of ATR.  As if such repressive measures were not enough, a search was carried out on Tuesday evening of the home of Ilmi Umerov, Deputy Head of the Mejlis, or Crimean Tatar representative assembly.  Both he and the First Deputy Head, Nariman Dzhelyal had previously received visitations from the ‘prosecutor’s office’ and centre for countering ‘extremism’ warning them of the consequences of protests against the silencing of these media.

Russia’s regulatory body Roskomnadzor and President Vladimir Putin remained implacable to the last despite the numerous appeals to not destroy ATR and a warning from Andrei Yurov, a member of Putin’s own Human Rights Council that this would be an extremely negative signal.  If the leader of the occupation regime, Sergei Aksyonov had long made it clear that he regarded ATR as an “enemy element” that had no place in Russian-occupied Crimea, the failure to allow even the children’s TV channel Lale to continue broadcasting is a direct affront to the Crimean Tatar people. 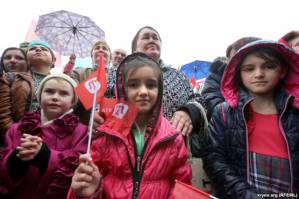 At a press conference on Tuesday, ATR’s owner Lenur Islyamov told viewers that they are studying various options for continuing the work of the channel and that he hopes that the break in broadcasting will be temporary.

ATR General Director Lilya Budzhurova spoke last, saying: “Those who decided to close TV ATR probably decided not just to hit out at a television channel, but at the entire people.. Their attempt can hardly succeed – we have been through worse than this. …. “

“Our people survived Stalin.  It can surely get through these present problems?  [Our people] will get through and will survive.  We will once again build our home in our land.”

“Yes, we are stopping broadcasting today, but we know that we will return. We always return”, Ms Budzhurova assured her viewers. 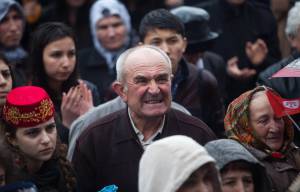 Amnesty International joined other voices of protest on Tuesday, calling the moves against ATR and all but one independent Crimean Tatar-language media outlet a “blatant attack on freedom of expression, dressed-up as an administrative procedure and a crude attempt to stifle independent media, gag dissenting voices, and intimidate the Crimean Tatar community.”

There has, in fact, been very little pretence over recent months.  Moscow discovered early on that western countries would make noise, but do little.  It is significant that all official statements regarding the only sanctions that have actually hurt Russia make their removal contingent only on compliance with the Minsk Agreement which says effectively nothing about Crimea.

Ukraine’s National Broadcasting Council has appealed to Ukrainian providers to support ATR and, where possible, allow it to broadcast in Ukrainian cable networks.

These are vital acts of solidarity and moral support, but even if the occupation regime does not block them, as it has Ukrainian media, most people do not have cable television.

Eight people, including the above-mentioned seven students are now facing charges after being detained in Simferopol on March 30 while making a video in support of ATR.  According to civic activist Alexei Yefremov, they had only been filming for around 10 minutes, were not foisting their views on anybody and were simply trying to make a video, when they were surrounded by the police.  Yefremov adds that they had initially planned to film near the university, but the police turned up.  “They read out a warning about not allowing extremism, the use of Nazi, Ukrainian symbols and advised us not to make the video”.  They decided to continue videoing elsewhere.

Eight people were detained, two of them underage students, with all held at a police station until late in the evening.  They are due in court on April 1 to face charges of “infringing the rules for holding mass protests”.  The nonsensical nature of the charges does not, unfortunately, give any reason to hope that the eight will not face fines from 20 to 50 thousand roubles, or 50 hours of community work.

It is not clear whether there was a specific pretext for the search carried out of Ilmi Umerov’s home in Bakhchysarai on Tuesday evening.  Both Umerov and Dzhelyal were recently elected to leading positions within the Mejlis whose Head Refat Chubarov has been banned from Crimea, and whose first deputy Akhtem Chiygoz is in detention on preposterous charges. Since their election, both have faced interrogation and searches.

All of this was reported by the media which Russia has now moved to crush.  It was a very dark day for Crimea and its indigenous Crimean Tatar people.