We haven’t lost a day 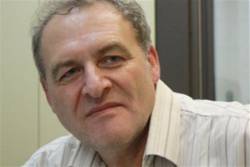 Kharkiv Human Rights Group Director Yevhen Zakharov answers criticism about the selection process for the director of Ukraine’s new National Anti-Corruption Bureau.   He says that the process is nearing an end, but notes that the closer they get to the final meeting when the commission is to select the 2 or 3 most worthy candidates to be put forward to President Petro Poroshenko, the greater the pressure from all sides.

Zakharov, who is the Secretary of the Commission, writes that on TV 112 on March 30 the presenter almost shouted at him, demanding to know why the commission had not finished its work.

He mentions also criticism from Mikhail Saakashwili who says that he had high hopes for the selection process, and that good people would be selected.  “I don’t know much about the four who have been selected, but each of them was a part of this system for many years.”  You can’t instruct a frog, he says, to dry out a bog and there are some rules that cannot be infringed.  He asserts that all the procedural requirements have been observed, but the result is a travesty.

Zakharov writes that Saakashvili is mistaken and that, on the contrary “all four candidates chosen at the second stage of the selection process are clearly far from the system of power which produced the corrupt relations”

“Yes, everybody is impatient for the appointment of the Director of the National Anti-Corruption Bureau.  However the commission acted in accordance with the law on NAB, and has not lost a day since Jan 12 when the competition was announced.

A month was given for preparing and submitting documents. On Feb 11 the applications were opened. From Feb 11 to 21 the documents of 176 applicants were, according to the law, posted on the President’s website.  The Commission studied these documents and kept the 106 candidates who met the competition requirements for the post of director in accordance with the law.

From Feb 23 to 26 Feb, the committee held interviews with these 106 candidates and shortlisted 21 for the second stage of the selection process.

From March 2 to 6, the Commission held more detailed interviews with them and on March 6 selected the four best candidates for the final selection of two or three to be submitted to the President.

On March 10 their documents were sent by the President’s Administration for special and lustration checks.  Although none of the four candidates falls under the law on cleaning up the government [‘the lustration law’), the special check is allocated 15 calendar days and there are thus far no results from this.

Why this is so is actually not clear.  Various opinions have been expressed as to the reason with the most widespread as far as I can see being the view expressed by Mr Saakashvili with his customary subtlety.