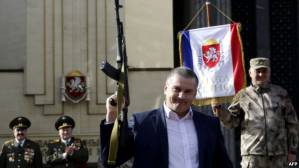 ‘Anti-terrorist exercises’ which clearly targeted Crimean Tatars; further efforts to silence independent voices coincided with plans to create a tame, pro-regime Crimean Tatar channel and the appointment of a former FSB spetsnaz officer with military experience in the Caucuses as head of Russia’s new minorities agency

It was clear who had been cast as ‘terrorists’ on Thursday as police carried out ‘checks’ of cars heading in and out of the village of Zhuravki in Crimea.  Particular attention was paid to cars with Crimean Tatar symbols.  Searches were carried out of Crimean Tatar homes in Zhuravki, as well as in Simferopol, and later on Thursday checkpoints had also been set up around the settlement of Lenino.  Zair Smedlyaev, Head of the Qurultay [National Congress] Central Election Committee, called this the latest campaign to intimidate the Crimean Tatars.  Chillingly, he also reported problems with communications, and suggested that might be the next method used, after the forced closure of ATR and other Crimean Tatar media to silence Crimean Tatars.

Smedlyaev the checkpoints on Thursday morning, as well as checks in Zhuravki itself of how firearms were being kept. “The most interesting thing is that they are simultaneously looking for a stolen motorbike in people’s houses, in cupboards, chests of drawers and computers with mobile telephones that they remove, without any court order or documents.”  QHA inhabitants as saying that the police gave varying pretexts for entering and searching people’s homes. Some claimed to be looking for prohibited literature, others weapons. One resident said that people are frightened to go out onto the street since there are armed men everywhere.  The person was worried how terrified his child would be when returning from school.

Smedlyaev later QHA that a similar operation was underway in the township of Lenino, with checkpoints with police and dogs, and armed men on the streets.  Searches were again being carried out, he said, supposedly in search of people taking part in terrorist operations.

There were about possible searches of Crimean Tatar homes in Fontany, in Simferopol.  Journalist Elvina Seitbullayeva quoted a resident as saying that men in military uniform were coming into people’s homes, claiming to be checking the electricity, yet checking every corner and cupboard. They did not identify themselves, the person said, and didn’t answer questions.  This, the person added, is what it’s like now in Crimea with this an attempt to intimidate Crimean Tatars.  On the other hand, the head of the regional Mejlis of Simferopol, Lemmar Yunusov reported that everything was quiet.

It was learned on Thursday that another warning against so-called ‘extremist actions’ was issued on March 31 as Crimean Tatar TV channel ATR and other media were about to be cut off in Russian-occupied Crimea.  Ali Ozenbash, Head of the Qurultay Inspection Commission was summoned to the Simferopol prosecutor’s office probably received a similar warning to those issued to the First Deputy Head of the Mejlis, or Crimean Tatar representative assembly Nariman Dzhelyal, and Deputy Head Ilmi Umerov.  Dzhelyal was visited by people from both the prosecutor’s office and from the Centre for Countering Extremism.  They read out a warning against any organization or participation in “unauthorized protests” linked with the possible silencing the TV channel ATR.  As has been the case with all such ‘warnings’, the officials refused to leave a copy.

Worryingly, Smedlyaev also reported that in his township there had been no Internet for a couple of days and no electricity for half of that day.  After the purge on Crimean Tatar media, he suggested, they might try to cut people off telephone and Internet communications.

While, as gloomily expected, Sergei Aksyonov, the leader installed when Russian soldiers seized control, has already set to .  After ensuring that ATR, the children’s TV channel Lale, and a number of other media were effectively refused re-registration, the occupation regime supposedly recognizes the “great need to develop Crimean Tatar media”.

The sort that’s tamed, doesn’t use words like ‘annexation’ and creates the pretence that Russia ‘cares’ about national minorities.  Very much as in Soviet times, in fact.  The news, incidentally, came on the same day that the head of Russia’s new ‘Federal agency on nationalities’ .  Igor Barinov is an MP from the ruling United Russia party and deputy chair of the State Duma’s Defence Committee.  He also just happens to be a former Alpha special forces [spetsnaz] commander within the Russian FSB or security service and took part in military action in both North Ossetia and Chechnya.

That says it all.