Continuing Obstruction of Odessa May 2 InvestigationPropaganda that KillsOdessa May 2 trial turns into farce as Russia continues ‘massacre’ propagandaBad Start to Crucial Odessa May 2 TrialsRussia’s New Odessa FileOdesa "Massacre" Propaganda vs. the FactsDangerous silence over police role in Odessa May 2 eventsWithout Double StandardsWhat Russian TV won’t show about the events in OdessaCVU: Pro-Russian activists sold information about pro-Ukrainian activists in OdessaUHHRU condemns police role in Odessa tragedyOdesa May 2 Investigation: A Failed Test for Ukrainian JusticeRussia Today, or why Odesa May 2 is different from BaltimoreMovement at last on Odesa 2 May investigationVital Probe of Odesa May 2 Tragedy stymied because of questions answered?Finding the real culprits of the events in Odesa on May 2, 2014There’s always a choice. Anti-war activities in Russia, 23-27 August Even Kremlin supporters admit Russia has created ‘a humanitarian disaster zone’ in occupied Ukrainian cities Russia has killed hundreds of civilians in Ukraine with banned cluster munitions Amnesty International’s 4 August statement. A response by the “Tribunal for Putin” initiative
• Topics / The right to life

More Evidence against Incendiary Lies about Odesa 2 May 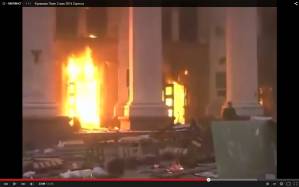 Important findings about the fire in the Trade Union Building on May 2, 2014 demonstrate yet again the full cynicism of the Russian propaganda machine in its deliberate attempts to stir up hatred and desire through lies about a massacre that day.

Most of the misinformation, and often deliberate lies, about the tragic confrontation between pro-Ukrainian and pro-federalism activists in Odesa on May 2, 2014 concern the fire in the Trade Union Building on Kulikovo Pole in which 42 people lost their lives.  Claims that this was a ‘massacre’ by Ukrainian ‘radicals’ with survivors beaten to death appeared in the Russian media at the outset and have been relentlessly pushed ever since.  This narrative is demonstrably false making the Ukrainian authorities’ failure to carry out an efficient and transparent investigation particularly frustrating.

If the authorities seem oblivious to the negative impact of such inaction, the May 2 Group is not.  This civic initiative was formed soon after the tragedy with representatives from both sides of the conflict.  It has worked tirelessly on studying the evidence, speaking with witnesses and the families of those killed, in order to establish what actually happened.

Group member and biochemist, Vladislav Balinsky has recently published important information regarding the fire itself.  This supplements his earlier findings which seriously undermined the claim that pro-federalism activists had fled from enraged ‘fascist radicals’ into the Trade Union building.  According to that version, the ‘radicals’ then set the building alight, and killed those who managed to escape.  Some variants, including a detailed account [Russia Today] by a supposed witness, claimed that the ‘radicals’ followed the pro-federalism activists into the building, up the stairs, and strangled some of the victims.

Balinsky was one of the first people to enter the building after the fire and his photos are a vital source of information about what actually happened.

Balinsky evidence indicating that at least some of the pro-federalism activists had set up barricades inside the Trade Union building just before the attack, with stockpiles of Molotov cocktails and inflammatory liquid for them.  He suggests that they deliberately gathered people in advance to occupy and defend the building, with calls not only from the square outside the building, but also earlier on, for example, social networks.

Some of the pro-federalism leaders, including Artem Davydchenko, used deception to get around 380 people into the building.  People were phoned and asked to come with medical aid and other items after the very first clashes in the city centre.  Witnesses have also reported that some of the passengers from the last stop of Tram No 18 were told that there was a bomb in the tram, and that they should hide in the Trade Union building.

While not an official conclusion of the Group as a whole, some of its members believe that there were conflicting views among the groups involved in the pro-federalism tent camp on Kulikovo Pole.  Judging by messages on social media, etc., there appears to have been one group who initiated the attack on a pro-unity march in the centre of Odesa earlier in the afternoon.  It seems likely that seizure and defence of the Trade Union building (providing a mirror image of the seizure by some Maidan supporters in Kyiv of the Trade Union building there) may have been part of that breakaway’s group’s plans.

A crowd of pro-Maidan activists did not just suddenly appear on Kulikovo Pole, nor on their way had they made any secret of their intention to forcibly remove the tent camp which the pro-federalism activists had set up some time back.  Despite this, the police made no effort to cordon the tent camp off or in other ways avoid confrontation.

It is certainly true that the crowd outside the Trade Union building was predominantly made up of pro-unity, pro-Maidan activists, and that those inside were mainly pro-federalism activists.  Anybody hurling a Molotov cocktail at a building, as some of the pro-unity activists were doubtless doing, is behaving with criminal disregard for the risk to life this creates.

Despite the danger this presented to anybody near the building, there is ample video footage and photographs showing desperate attempts by pro-unity activists to rescue those trapped in the building.  It is clear from the reporting from outside that nobody had any idea of the real number of people inside.

Balinsky divides the fire into two phases, with the first beginning at 19.44 and lasting 9 minutes.

This phase ended with the emergence of a stack (chimney) effect causing the walls of the stairwell to combust within the space of a minute, and for the fire to spread very rapidly.

“The specific and tragic nature of the fire in the Odesa Trade Union building on May 2, 2014 is linked with the rapid development of its second phase.”

The fire almost momentarily engulfed the stairwell up to the third floor, then the fourth, as well as going through wooden and metal-plastic doors and corridor partitions on the first floor.

The people gathered at the windows on the inter-storey staircase landing and near the central stairwell were suddenly trapped by the fire with temperature rising to around 700 ° C.   They died either from the fire itself, or when they jumped from the window trying to escape it.  On the fourth and fifth floors where most of the bodies were found, it is likely that people had died of smoke inhalation and from poisonous fumes before the fire reached them.

No other causes of death

The massacre narrative normally suggests that hundreds may have been killed.  42 bodies were found, of which one has never been identified.  There is no evidence of any other victims, and the number of people who disappeared around that time in Odesa fully corresponds to the normal statistics for people going missing.

While the authorities have even refused to allow the May 2 Group to see the results of forensic examinations, neither Balitsky nor Volodymyr Carkisyan, a forensic toxicologist, found any evidence of deaths not explainable by the fire, smoke and toxic fumes.  The latter were in the first instance emitted by many of the items used for the barricade at the foyer doors.  These included various pieces of upholstered furniture which are not only highly flammable, but also contain foam, polyurethane and other materials which emit toxic substances into the air when burned.  There were also Molotov cocktails and the incendiary liquid for them, a gas power generator and a fridge containing Freon which would have added to the toxic material emitted when the temperature shot above 600 ° C.

A tragedy not averted

The first call to the fire brigade was at 7.31 reporting the fire outside which soon set the entrance doors and then the barricades inside alight.  It is not clear who caused that original fire since both sides were hurling Molotov cocktails.  There were two hits from pro-federalism activists on the roof: one flare hits a tent at 2.16 on the video here:  , while in the first minute of the tape here, one of the Molotov cocktails thrown from the roof seems to hit a tent

Prompt reaction from the fire brigade could have prevented the fire from spreading and enabled people to escape the dangerous areas. The emergency services were called numerous times, but only arrived at 20.16.

For 40 minutes, it was pro-unity activists who succeeded in rescuing several dozen people from the smoke-filled offices on the second and third floor of the building  (see: (from around 2.0 onwards).

The use of carefully edited material and disregard for clear documentary and video evidence that disproves the massacre claims leave no scope for illusion regarding the motives of those who so loudly voice them.

Most of the pogroms began in similar fashion with totally unjustified claims of heinous crimes committed by one or more Jews.

Those pushing a massacre narrative about the May 2 tragedy are well aware of the incendiary effect their words can and do have.  There are frequent reports of young men citing Odessa as the reason they felt compelled to come to Donbas and fight on the side of the Kremlin-backed militants.

They were cynically conned.