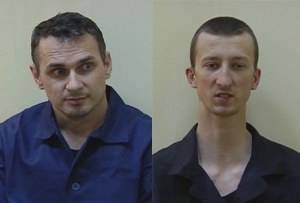 Crimean opponents of Russia’s annexation of Crimea – renowned film director Oleg Sentsov and civic activist Oleksandr Kolchenko – are facing likely 20 year sentences for refusing to confess to charges which are both politically motivated and absurd.

Sentsov and Kolchenko have been in Russian detention for almost a year and it is likely that both will have their detention extended this coming week.  The investigation is officially complete although only Kolchenko has thus far been informed of the charges against him.  The charges are those presented at the outset (participation in a terrorist group and a terrorist act committed by an organized group), but the only specific act with which he is charged barely stretches to hooliganism.

Kolchenko does not deny that in April 2014 he took part in an ‘arson attack’ on the office of the United Russia political party in Simferopol.  The said attack involved throwing one Molotov cocktail at the offices late in the evening when nobody would be there.

The FSB has decided, however, to claim that this was a ‘terrorist act seeking Crimea’s ‘secession’ from Russia’.

Both Kolchenko and his lawyer, Svetlana Sidorkina are adamant that the charges are absurd.  Kolchenko had no such grandiose plans or motives for the incident.  Nor is the claim that he was part of a ‘Right Sector plot’ any more credible.  The 26-year-old civic and environmental activist is a staunch anti-fascist with anarchist leanings who would have had nothing to do with the right-wing and ultra-nationalist Right Sector party.

If Russia’s FSB were scratching the barrel to come up with a charge against Kolchenko, they will have to resort to total fiction to find something against Oleg Sentsov.  Not only is the supposed ‘mastermind’ of this FSB-concocted terrorist plot a renowned film director, but he is also a solo father who was bringing up two young children by himself.   He was actively involved both in the AutoMaidan part of the EuroMaidan protests and in helping deliver food and supplies to Ukrainian soldiers trapped after Russia effectively invaded Crimea in February 2014.

Both Kolchenko and Sentsov have insisted that they were tortured in Simferopol detention, with Sentsov told that if he did not ‘confess’, they would pin more serious charges on him.  Both men refused and now face sentences of up to 20 years, with Sentsov alleged to have been in charge of the supposed plot..

Two other opponents of annexation – Gennady Afanasyev and Oleksy Chirny - were also arrested last May, and were displayed on Russian television ‘confessing’.  Afanasyev chose to cooperate with the investigators, and was tried in a separate secret trial in December, and sentenced to 7 years.  Sentsov and Kolchenko’s defence lawyers believe that Afanasyev made a deal with the prosecution, providing testimony against their clients in exchange for a shorter sentence.

Russian human rights journalist Zoya Svetova suggests that Chirny has also agreed to ‘cooperate’ with the prosecution, however Kolchenko’s lawyer Svetlana Sidorkina has pointed to other inaccuracies in Svetova’s text and is not aware of the source of her information about Chirny.

Sidorkina and Sentsov’s lawyer, Dmitry Dindze only learned of Afanasyev’s ‘trial’ after he had been sentenced despite the obvious need for them to be able to cross-examine a person whose testimony is likely to be used against their clients.

Sentsov and Kolchenko have been recognized as political prisoners by the authoritative Memorial Society and other human rights organizations.  Sentsov is well-known and therefore his name is most often heard, however the calls from the Parliamentary Assembly of the Council of Europe and all western governments, as well as from Sentsov’s cinema colleagues should surely be understood as being for the release of both men.

The four Crimeans were all taken to Russia despite being Ukrainian nationals and Ukraine’s Prosecutor General recently initiated a criminal investigation over Kolchenko’s illegal abduction.  Moscow has tried to foist Russian citizenship on both Sentsov and Kolchenko, attempts which both men have adamantly resisted.

Sentsov’s lawyer  recently suggested, most controversially, that Sentsov and Nadiya Savchenko, should ‘confess’ in the hope that the Russian authorities would return them to Ukraine.  Svetlana Sidorkina believes that such ‘confessions’ would only play into Russia’s hands, but says that in any case Kolchenko would never agree to confess to something he didn’t do.  Nadiya Savchenko’s rejection of such a suggestion was swift and angry, and there is no reason to believe that Sentsov would react differently.

It was on May 30 last year that the FSB finally revealed details about the alleged ‘terrorist plot’.  The four men were then alleged to have been members of a Right Sector group planning to carry out ‘diversionary-terrorist’ acts in Simferopol; Yalta and Sevastopol, and in the last of these to destroy a number of buildings, railway bridges and power lines.  They were also supposedly planning bomb attacks during the early hours of May 9 [Victory Day] near the Eternal Flame and a Lenin monument in Simferopol.

If any of this nonsense appears in the trial of Oleksandr Kolchenko, it will be based solely on testimony given during Afanasyev’s secret and closed trial.  Under the current regime in Russia, the FSB’s show trial of political opponents in Crimea may well result in tragically long sentences for at least two Ukrainians.  In Kolchenko’s case, it will be 20 years for a Molotov cocktail.