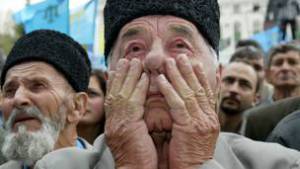 As well as lies about the forced silencing of Crimean Tatar TV ATR and plans to replace it with a malleable pro-regime clone, a top figure in Russian-occupied Crimea has proposed that the “cult” of May 18 – the anniversary of the Deportation of the entire Crimean Tatar People in 1944 should be stopped and Crimeans should instead celebrate a "day of joy"

In an interview to Lenta.ru, Dmitry Polonsky, first deputy prime minister of the occupation government in Crimea referred to a “joint conference of all major civic Crimean Tatar organizations” which he claimed took place on April 2.  It was they, he asserted, who came up with the following suggestion which is worth hearing in his original rendition.

“The civic activists themselves expressed the opinion that it is long time to remove the accent from May 18.  This is undoubtedly the anniversary of a tragedy, a day of mourning, however it should be held in memory of the dead, by going to the cemetery and remembering the innocent victims at home.

The cult of 18 May among Crimean Tatars was for decades artificially created by the leaders of the so-called mejlis [sic] in order to give people an inferiority complex. It’s impossible to build plans about the successful development of a people on the basis of a tragedy.  That, incidentally, was the great mistake of the Ukrainian authorities that constantly tried to create a cult out of various tragedies, whether Holodomor [the artificially caused Famine in 1932/33] or the deportation. It’s impossible to build a strong nation on failings.”

Asked what was proposed instead, Polonsky asserted that “the Crimean Tatar civic activists suggested April 21.  The day that the President of Russia Vladimir Putin signed a degree about the rehabilitation of victims of the deportation. This was not only about Crimean Tatars, but also the Armenian, German, Greek and other peoples of Crimea. From a day of mourning we must nonetheless move to a day of joy.  Aksyonov [Sergei Aksyonov, leader installed when Russian invaded] also supported the idea that April 21 should become a date uniting all Crimean peoples, a day of mass events. You need to remember the dead quietly, and rejoice loudly.”

More than 100 thousand Crimean Tatars died as a result of Stalin’s Deportation, and from when the Crimean Tatars were welcomed back to their homeland by Ukraine’s newly independent government, a huge remembrance gathering was held each year in the centre of Simferopol on May 18.

Until 2014 - the seventieth anniversary of the Deportation and a month after Russia’s annexation of Crimea – when the occupation regime banned all public gatherings until June  (see: Russian Clamp on Crimean Tatar Remembrance).  The remembrance prayer gatherings that were held took place with military helicopters flying overhead.

The commemorations were organized by the Mejlis or Crimean Tatar representative body which has come under a major attack since annexation.  Veteran Crimean Tatar leader Mustafa Dzhemiliev, who was 6 months old in 1944, had again been banned from his homeland.  The current Head of the Mejlis, Refat Chubarov has also now been banned, while his first deputy, Akhtem Chiygoz is imprisoned in Crimea.

It was already clear that under Russian occupation, the traditional remembrance gathering or any mass events were likely to be cancelled, but the proposal to replace the commemorative event with a festive occasion is a truly shameful affront.

There has been a noticeable increase in activity from certain Crimean Tatar organizations which always had minimal support among Crimean Tatars.  Vasvi Abduraimov, leader of one such organization Milli Fyrka gained notoriety back in 2008 when he wrote to Putin and Dmitry Medvedev [the nominal President of Russia at the time] asking them to “defend” the Crimean Tatars against Kyiv.

Milli Fyrka has been noticeably active recently in producing defamatory material about precisely those Crimean Tatar media which Russia silenced by refusing re-registration.  It is likely that this organization played a prominent role in the supposed “joint conference of all major civic Crimean Tatar organizations”.  The supposed plans for Crimean Tatar public broadcasting would also, presumably, include such groups, as well as the few Crimean Tatars who opted to cooperate with the current occupation regime.

In the meantime, both Russia’s Foreign Ministry and the leaders Moscow installed in Crimea persist in pushing an entirely implausible line about the reasons that ATR and the other Crimean Tatar media were removed.

Russia’s Foreign Ministry declared “attempts to explain the situation as infringement of freedom of speech and the rights of Crimean Tatar media groundless and outrageous”.   It claims, as do Aksyonov and Polonsky, that ATR simply failed to properly re-register in the timeframe given.

Polonsky’s version is equally far from the truth, although less insincere since like Aksyonov he quite openly seeks to blacken ATR’s reputation and deny the widespread anger in Crimea at the silencing of this vital television channel.

If the Kremlin really expected anybody to believe that the silencing of ATR was not a an assault on freedom of speech and the Crimean Tatar people, it should have stopped its puppet leader from stating loud and clear that there was no place for ATR or similar ‘hostile media’ “that stir up hysteria and give some citizens hope that Crimea will return to Ukraine, thus carrying out destructive activities”.

However, after Vladimir Putin publicly admitted to planning and carrying out the annexation, it’s probably immaterial what Aksyonov says.  The only baffling part if why Russia’s foreign ministry bothered to wax indignant.