Faith under Fire and FSB Surveillance in Crimea 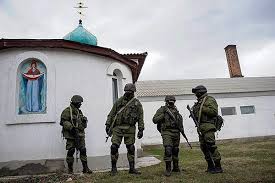 Armed attack on a Kyiv Patriarchate Orthodox Church in the village of Pervalne, June 2014

A year after Russia annexed Crimea, almost all faiths are experiencing serious pressure from the occupation regime, with the regulations on Russian re-registration and restrictions on Ukrainian nationals serving to drive many out and / or prevent them from functioning legally.  Most also face heightened attention from Russia’s FSB [Security Service], prohibitive increases in rent, etc.

In order to function legally in Crimea, religious organizations have to re-register under Russian legislation, and add words to their association papers about Crimea being a part of Russia.  For this reason, Said Ismagilov, Mufti of the Spiritual Directorate of Muslims of Ukraine, explained at a press conference on April 16, communities under the Directorate have refused to register and are ceasing to function in Russian-occupied Crimea.  Such clauses, as well as refusal to take Russian citizenship, are proving major obstacles for representatives of many religious communities.

Some faiths are effectively being hounded out.  Speaking at the same press conference, Anatoly Kalyuzhny, Pastor of the New Life Church, accused the authorities of being extremely selective in their treatment of religious communities.  Not one protestant community has received full registration in Crimea.  Without legal status, such communities are unable to rent premises and continue functioning.  The same problems are faced by all other churches, aside from the Orthodox Church under the Moscow Patriarchate.

Pastor Anatoly said also that according to reports from Protestants in Crimea, the FSB are also engaging in active surveillance of leaders of churches.  A separate database has been created and their contacts with believers in mainland Ukraine are being followed.

“Protestants were always viewed by Russia as alien, they called them pro-American. And unfortunately this is making itself felt very strongly. If this continues, Protestant organizations will be outside the law and unable to function properly. This is a very delicate way of pushing Protestant churches out”, he said.

“If a person is a Ukrainian national, then he effectively cannot serve as a pastor and actively serve in Crimea.  He is forced to either leave Crimea, or simply do nothing.”

He believes the “real Protestant Church will go underground. Those whom they somehow manage to break will work, and some will simply disappear as religious communities”.

While both Said Ismagilov and Pastor Anatoly mentioned specific problems encountered by believers of their faith, most of the issues are common to other faiths in Crimea.

Back in October 2014, the All-Ukrainian Council of Churches and Religious Organizations warned that re-registration rules would likely be used as a weapon against Ukrainian and foreign religious organizations in Crimea.  Their concerns have been proven justified.

The Crimean Human Rights Field Mission [CFM] reports that as of Feb 12 this year, only around 100 religious communities had submitted documents for re-registration.  In 6 weeks the authorities had only registered 30 of these.  This at least prompted an extension of the deadline for re-registration to Jan 1, 2016, however for many organizations this changes little.

Since there were over 2 thousand religious organizations in Crimea at the beginning of 2014, before Russia’s annexation, the situation is truly bleak.

Religious organizations told CFM that they were daunted by the huge number of documents demanded; by the lack of legal knowledge (both theirs and that of the people receiving the documents) and long queues.  Many also say that purely formal difficulties are put in their way.

Religious organizations have two options: to either merge with an already existing Russian structure or to register as a separate religious community.  The first is much easier but not all can or wish to do this. The second enables the authorities to ask all kinds of questions before granting (or refusing) permission.  The community is asked to explain, for example, the faith’s attitude to the family; to single-sex marriages; to divorce.  CFM notes also that the registering bodies can also question the organization about its attitude to the government, which clearly does not directly pertain to religion.

The Ukrainian Orthodox Church under the Kyiv Patriarchate came under attack soon after occupation and is now under threat of closure. If the churches under its jurisdiction cannot get Russian registration, their activities will be deemed illegal in Crimea and their churches handed over to the Orthodox Church under the Moscow Patriarchate.   The clergy are usually not willing to take on Russian citizenship which is another “mark against them” from the point of view of re-registration.

CFM points out that churches have already been taken away from parishes in the villages of Osovyny and Perevalne; in Krasnoperekopsk and the Church attached to the Nakhimovsky College in Sevastopol.

In one real sign of the new times, Russia’s FSB has been trying to get land previously allocated to the Orthodox Church under the Kyiv Patriarchate for a cathedral.  The head of the Simferopol administration even wrote to Archbishop Klement asking the Church to give up the land.

Aside from attempted FSB land-grabs, similar problems are experienced by the Ukrainian Greek Catholic Church and Roman Catholics.  In their cases, however, the  occupation authorities have the additional leverage against them that most clergy are from mainland Ukraine or foreign, usually Polish, nationals.  They need to leave Crimea every 3 months.

It is increasingly difficult to separate religious harassment of Muslims from the generally repressive measures against Crimean Tatars.  There have been frequent searches of Muslim homes, religious schools and mosques, with these often carried out by armed officers, and under the thoroughly offensive pretext of looking for ‘narcotics, arms or prohibited literature’ (more details here).

Not all individual faiths are mentioned here, but all, except the Orthodox Church under the Moscow Patriarchate are facing very grave difficulties and may be forced underground or out of Crimea, leaving believers without services and places of worship.

The only positive result from Russia’s invasion and annexation has been the increased cooperation and solidarity demonstrated by different faiths.  When, back in March 2014, the Orthodox Church under the Kyiv Patriarchate first began experiencing real pressure, Crimean Tatars immediately offered their mosques for church services.

The words of protest from the West have largely remained words, and little has been done to exert real pressure on Russia to observe its obligations under Russian and international law and stop overt pressure and discrimination of religious communities in Crimea.

Support and solidarity are urgently needed, and voices raised on behalf of all Crimea’s believers .