Sentsov: 20-year sentence predetermined, but your regime will end sooner 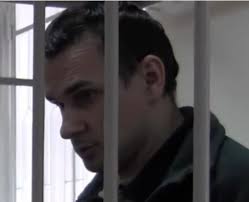 There is no evidence against Crimean film director Oleg Sentsov, no crime nor victim, yet he has been threatened from the outset – from back in May, 2014 -  with a 20-year sentence – if he lives to serve it.  He told the court on Wednesday that he feared neither the threats nor the sentence since “the rule of the bloody runt in your country will end sooner.”

There were, unfortunately, no surprises in the court hearing on April 8.  As expected, FSB investigator ‘into particularly serious cases’ Artyom Burdin demanded that Sentsov’s detention be extended for another 2 months.  No less predictably, Judge Yelena Kaneva allowed the application, ignoring the multiple arguments against, not least the oath she once gave to serve the cause of justice.

Sentsov’s detention has now been extended until May 11, which will be one year and a day after he was arrested and soon taken to Moscow.  He and Oleksandr Kolchenko have been recognized as political prisoners by Memorial and other organizations, and their release has been demanded by, among others, the Parliamentary Assembly of the Council of Europe.  Russia replied to the PACE resolution calling for Sentsov’s release by additionally charging him, some 9 months after his arrest, with possession of weapons.

Burdin stated in court that the ‘investigation’ was nearing an end and that Sentsov would be handed the indictment on April 10.  Kolchenko received his on March 31, with the charges of ‘committing a terrorist act’ and ‘taking part in a terrorist plot’ remaining, but only one actual offence mentioned.  He is accused of taking part in the hurling of a Molotov cocktail at the United Russia party’s officers in April 2014.  This may be an anti-social act, but it was carried out at night when the offices would be deserted and hardly constitutes more than an act of hooliganism.

If Kolchenko acknowledges involvement in the Molotov cocktail incident, but denies any ‘terrorist’ element to it, there are no incidents as such against Sentsov at all, yet both men are facing likely 20-year sentences.

Both Sentsov and Kolchenko alleged from the outset that they had been subjected to torture in order to extract ‘confessions’ out of them.  The prosecution has persistently claimed that Sentsov was detained on May 11, however Sentsov maintains that he was held by FSB officers from the evening of May 10.  He says they beat him, put a plastic bag over his head and threatened to use a police baton to rape him. He was told that if he didn’t ‘confess’, they would pin heavier charges on him.

This is effectively what happened, with the 38-year-old film director and solo father of two young children accused of ‘masterminding’ a terrorist plot.  Neither Sentsov, nor his lawyers have been able to view the material against him and assume it to be based solely on testimony from one, perhaps two other defendants.

As reported, four men were detained in May 2014.  Gennady Afanasyev and Oleksy Chirniy signed ‘confessions’ which were cited when the FSB first announced charges on May 30.  All four men were alleged to have been been members of a Right Sector group planning to carry out ‘diversionary-terrorist’ acts in Simferopol; Yalta and Sevastopol, and in the last of these to destroy a number of buildings, railway bridges and power lines.  They were also supposedly planning bomb attacks during the early hours of May 9 [Victory Day] near the Eternal Flame and a Lenin monument in Simferopol.

None of this appears in the indictment against Kolchenko, and what Afanasyev was convicted of is anybody’s guess since he was tried in secret in December last year and received a 7-year sentence.  Sentsov and Kolchenko’s lawyers believe that he got the minimum sentence (under the article on terrorism) for collaborating with the investigators by giving false testimony against the others.

Burdyn announced in court on Wednesday that Chirniy is also cooperating with the investigators and his case will be heard separately. It is likely, therefore, that he will be tried behind closed doors with the defence for Sentsov and Kolchenko once again not given the opportunity to cross-examine defendants testifying against their clients.

Russia has also persisted in trying to foist Russian citizenship on Sentsov and Kolchenko – in order to justify their effective abduction to Moscow and deprivation of their rights as Ukrainian nationals.

It remains to be seen what kind of charges they concoct, but Sentsov himself has no illusions about what awaits him under the present regime in Russia.  The final word to Oleg Sentsov.

“I cannot agree with the investigator’s application for my detention to be extended since no evidence has been provided of my part in or organization of terrorist acts. As before, everything rests on two bottles with salt and the testimony of Chirniy and Afanasyev. For example, Chirniy testified that I had personally instructed him to carry out terrorist acts and explosions and that I was supposed to give him cover with a pistol from the bushes. Yet the investigators carried out an expert assessment, gave Chirniy a polygraph test which showed that the information was not in his mind or his memory.

Yet the investigators now have a second expert assessment, a psychiatric one. That claims that Chirniy was, well, a bit out of things before, and now he’s in a totally bad way, and therefore he can confuse the investigation and try to deceive the lie-detector. Although it’s not at all clear why he’d give such testimony and at the same time try to protect me.

I’m convinced that our valiant investigators will nonetheless prove this because the Federal Service of Lawlessness in your country knows how to stitch up cases with big fat threads.  I’m sure that on April 10 I’ll be handed a tidily presented case. I’ll definitely get 20 years. Because that was the sentence that was assigned on the very first day before my official detention. That’s already decided, it’s constantly talked about and my lawyers get hints that I can expect a very hard and interesting life in the camp, if I even get there.

But I’m not afraid of the threats, the hints. And this sentence of 20 years doesn’t frighten me, because I know that the rule of the bloody runt in your country will end sooner”.