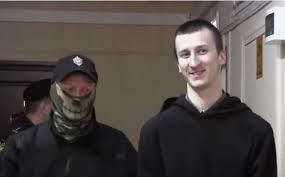 Oleksandr Kolchenko, Crimean civic activist and recognized political prisoner, has lodged a complaint with the European Court of Human Rights over the Russian citizenship which Moscow is foisting on him.

Kolchenko was arrested in May last year and was shortly afterwards taken to Moscow where he has been held in detention ever since, with a court on Thursday extending the detention, this time until May 16.

According to his lawyer, Svetlana Sidorkina, Kolchenko was illegally issued with a Russian passport, dated May 26, 2014, since he was already then in detention.

Sidorkina challenged the attempt to force Russian citizenship on Kolchenko in a Simferopol court in December last year.   She explained then that Kolchenko had had valid reasons for missing the deadline imposed after Russia invaded and annexed Crimea for officially announcing that he was retaining Ukrainian citizenship.  He was not familiar with Russian legislation, nor was he aware of the arrangements made on Russia’s annexation on March 18.  The month given for this was far too short a timeframe for a well-considered decision.

The application to the European Court of Human Rights stresses that by forcing Russian citizenship on him, Kolchenko is being prevented from enjoying his rights as a Ukrainian national and has been deprived of international legal protection.

Kolchenko also challenges the process itself of issuing Russian citizenship to Crimean residents after Russia’s annexation.  He argues, for example, that a month was not a sufficient time-frame.

As reported, there were also a very limited number of places where people could formally register their wish to retain Ukrainian citizenship, with this needing to be done in person.

In January a Crimean court denied Kolchenko the right to retain Ukrainian citizenship.  The Russian authorities claimed that Kolchenko had himself officially applied for Russian citizenship, but provided no evidence to back this.

The same situation has been seen with Ukrainian film director Oleg Sentsov who also rejects Russian attempts to foist Russian citizenship on him.  During a court hearing in July last year, he made his position entirely clear.

In February this year, the Russian Prosecutor General’s Office finally admitted that Sentsov is a Ukrainian national, but claimed that he also had Russian citizenship.  It attempted to use the lack of an agreement with Ukraine on dual nationality to insist that ‘de jure’ Sentsov should be treated as Russian.

Sentsov is well-known and his case more prominent, however the situation with foisted citizenship is the same for both.

So too are the likely 20-year sentences against two opponents of Russia’s annexation.

As reported here, Oleksandr Kolchenko has already been handed the final indictment.  The charges of ‘committing a terrorist attack’ and ‘taking part in a terrorist organization’ remain the same as those initially brought.  There is, however, only one actual event with which he is charged: an incident in April 2014 when a Molotov cocktail was thrown at the offices of the United Russia party in Simferopol.  The incident took place at night, meaning that the offices would be empty. More details here: Crimean ‘Terrorism Plot’:  20 Years for a Molotov Cocktail

Russia’s FSB claimed a major ‘Right Sector terrorist plot’ back in May 2014.  It has found one Molotov cocktail incident which could at most be deemed hooliganism, and seemingly nothing against Oleg Sentsov at all.  Yet both men are charged with terrorism, and, most terrifyingly, there appears to be little or no charge that they will not receive sentences of up to 20 years imprisonment.