Phantoms are phantomsFighting phantomsNo dossier on ShukhevychWorking to reveal the truth about OUN and UPAMore information from SBU archivesSBU is planning to tell the truth about Soviet efforts at discrediting the UPAPresident called on to help lift the seal on KGB archivesOn the 65th anniversary of UPA the arguments still rageFirst joint memorial unveiled for Soviet soldiers and fighters of OUN-UPAParliament ignores public opinion on Ukraine’s history. Will the President?Analysis of the Law on Prohibiting Communist Symbols"Decommunization" Laws: Deeply Divisive and Destined for StrasbourgPresident signs dangerously flawed ‘decommunization’ lawsCommunist party ban will be slammed in Strasbourg, along with original decommunization lawUkraine’s Communist Party OutlawedUkraine’s Decommunisation Law hammered by Venice Commission for violating democratic standards5 years for a red flag? Controversial decommunization law used against Ukrainian veterans’Decommunization’ in Ukraine Carried Out Using Communist MethodsUkrainian student sentenced for ‘propaganda of communism’ on FacebookDivisive & Ill-Timed Renaming of Kyiv Street after Controversial Nationalist Leader
• Topics / Point of view 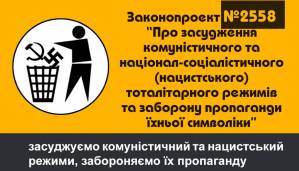 From the Institute for National Remembrance

On April 9 Ukraine’s Verkhovna Rada adopted four laws pertaining to Ukraine’s recent history, two of which at least are highly contentious, with the manner in which they were presented to parliament and voted on also grounds for concern.  At a time when Russia is waging undeclared war against Ukraine, the need for unity is paramount.  Instead, a majority in the Verkhovna Rada passed laws which will be used in propaganda against Ukraine with some of that propaganda, unfortunately, being difficult to refute.

The four laws were only tabled in parliament on April 3, with no public debate despite subject matter arousing very strong opinions and emotions in a significant number of Ukrainians.  The most controversial law has a different title and broader scope, but basically does something that was talked about under the presidency of Viktor Yushchenko but never carried through precisely because it was so contentious.  The law now is entitled ‘On the Legal Status and Honouring of Fighters for Ukraine’s Independence in the Twentieth Century’, and carries with it entitlement to social benefits and full military status.  This, among other things, recognizes the UPA, or Ukrainian Insurgent Army, as veterans of the Second World War.  The whole law essentially lumps vastly different military formations, political or human rights movements together as having all struggled for Ukrainian independence, and then states, in Article 6, that “public denial of the legitimacy of the struggle for Ukraine’s independence in the XX century is deemed desecration of the memory of fighters for Ukraine’s independence in the XX century, denigration of the dignity of the Ukrainian people and is unlawful”.

No legal consequences are mentioned, however the very statement is of concern.  There is an enormous list of such entities, and it would take time to verify how many of them were implicated in, for example, acts of terrorism viewed by their perpetrators as legitimate forms of struggle.  Would suggesting that it was terrorism to kill Polish politicians in the 1930s (and sometimes also Ukrainians who held different views)  fall under Article 6?

There will be inevitable fallout from full recognition of UPA (and the Organization of Ukrainian Nationalists, or OUN).  This is likely to be viewed very negatively by a considerable number of Ukrainians, especially in eastern parts of Ukraine.  It is also guaranteed to anger Poles, in particular because of the Volyn Massacre of 1943 in which UPA members were directly implicated.  Authoritative historians such as Grzegorz Motyka provide evidence showing that the ethnic cleansing policy then applied by the Volyn UPA in October 1943 received the tacit approval of Roman Shukhevych, UPA commander and father of the author of the 2015 bill, Yury Shukhevych.

Again, would mentioning these facts be considered to be ‘showing disrespect’ for independence fighters?

This is a contentious area which needed to be introduced properly with widespread discussion and respect for conflicting views.  It could not be achieved before the end of Yushchenko’s presidency, and it is disturbing that it was slipped in now at a time when such debate is rendered impossible because of the conflict with Russia.

There is no reason to expect Russia’s well-paid and manned propaganda machine to stay silent when such obvious opportunities to fuel resentment and anger are handed to them on a platter.

The second bill which gained a lot of publicity is ‘On condemning the communist and National Socialist (Nazi) totalitarian regimes and prohibiting propaganda of their symbols’.

Whatever one’s attitude to the Soviet regime is, a blanket ban on “public denial of the criminal nature of the communist totalitarian regime of 1917 – 1991 in Ukraine” seems designed to strangle any attempts at real historical study of the period.  Once again, the bill requires careful analysis, to see what symbols are actually prohibited, and what totally fascist ideologies have unwarrantedly been omitted from the ban.  There are also absurdities since even military awards could be regarded as prohibited symbols of Ukraine's communist totalitarian past. Dmitry Tymchuk, military commentator and now MP has already promised to rectify this specific issue, however there are many.  Proper study and consultation with historians, etc, should have been carried out and made public before the bill was adopted, not now.

The package of bills was presented in parliament and largely drawn up by the head of the Institute for National Remembrance Volodymyr Viatrovych.  The latter was head of the SBU [Security Service] archives under Yushchenko and became widely known for his strong support for nationalist leaders Stepan Bandera and Roman Shukhevych, and OUN-UPA.  His works as a historian, for example, his attempts to present the Volyn Massacre “in a wider context” as part of an alleged Polish-Ukrainian war from 1942-1947 have prompted criticism, both from historians and from the wider public.  Concern has often been expressed, including by the author of these words, over historical manipulation of facts or downright inaccuracies.

Viatrovych undoubtedly has the right to his own views.  Neither he nor the Institute he now heads has the right to determine what parts of history are remembered and how.  Under Yushchenko, he strongly defended controversial decisions to declare Stepan Bandera and Roman Shukhevych ‘heroes of Ukraine’, claiming in Bandera’s case that all the ‘evidence’ proved him to be worthy of the title.  This is a judgment based on a person’s ideological position, and should not be foisted on others.

The other two bills are contentious mainly because of concerns about the possible politicization of the Institute for National Remembrance.

‘On remembering the victory over Nazism in the Second World War’ does not cancel Victory Day on May 9, but establishes May 8 as Day of Memory and Reconciliation. It also removes use of the Soviet term Great Patriotic War.

Item 3 prohibits “falsification of the history of the Second World War 1939-1945 in academic studies, teaching and methodological literature, textbooks, the media, public addresses by representatives of the authorities, bodies of local self-government and officials”.

This should be uncontentious, but is not, as any glance at material, including by Viatrovych, on UPA, Bandera, the events in Volyn, etc. will make clear.   Who is to decide what constitutes “falsification”?

The final law ‘On access to the archives of repressive bodies of the communist totalitarian regime from 1917-1991’ places the state archives concerning repression during the Soviet period under the jurisdiction of the Institute for National Remembrance’.

Open access to archives is indeed vital and it is quite likely true, as stated in the explanatory note, that this is standard for democratic countries.  What is not necessarily standard is the degree of politicization of the country’s Institute for National Remembrance.  Put very bluntly, if you are convinced that a person is a hero, then you are unlikely to wish material suggesting the contrary to be on public display.

The laws passed on Thursday go a step further, prohibiting ‘falsification’ of history and ‘disrespect’ for independence fighters.  Russia has gone much further still in recent years and, for example, is currently seeing a huge increase in support for the bloody Soviet dictator Joseph Stalin.  The antidote is found not in counter-propaganda, but in rejection of political interference in historical memory and total freedom for historical investigation.