Bad News for Moscow on the Language Front 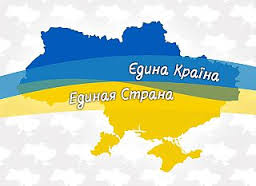 United Country (first in Ukrainian, then in Russian)

A recent Russian news broadcast added an entirely fictitious phrase supposedly spoken by Ukraine’s President in the latest of countless attempts to push the Kremlin line about alleged discrimination of Russian-speakers.  Fiction is needed since reality is not on Moscow’s side.  A survey, for example, has found only 19% support for Russian becoming a State language.

On April 6 TV Rossiya-1 claimed that, in an address to the first meeting of the new Constitutional Commission, Ukraine’s President Petro Poroshenko stated that “we will always speak only Ukrainian”  This was fortunately noted by Radio Svoboda which points out that Poroshenko said only that Ukrainian would continue to be the only state language.

The Rossiya-1 version entitled “The day’s intrigue: Did Poroshenko propose that Putin “take” Donbas?” says: “Be that as it may, Kyiv’s behaviour speaks for itself: Ukraine seemingly really doesn’t need Donbas. Poroshenko today stated that the Ukrainian language would always be the only State language despite the fact that the special status of Donbas agreed in Minsk by the ‘Normandy Four’ envisages that they will be able to speak Russian freely as well”.

Poroshenko, in fact, made it quite clear that as part of a process of decentralization the local specific features of an area would have to be taken into account, with respect to language, faith, historical memory, ethnic traditions “as well as other expressions of their diversity which should only unite Ukraine and hold it united”.

The Kyiv International Institute of Sociology [KIIS] has just released the results of a survey carried out in February on attitudes to the Russian language.  Respondents were from throughout Ukraine, except Crimea and included people from areas under Kremlin-backed militant control in the Donetsk and Luhansk oblasts.

The survey found a significant decrease in support for Russian being made a second State language, from the 27% in favour of this in 2013 down to 19% in 2015.

52% believe that Russian should be made the second official language only in those areas where the majority of the population want this.

Interestingly, there is approximate parity between the number who believe that the Russian language should be removed from official life (21%) and those who think it should become a State language (19%).

There is a fairly predictable geographic divide between western and central oblasts on the one hand and southern and eastern oblasts (including Donbas), on the other.  However even in eastern oblasts a majority are in support only of Russian being made the second official language in areas where the majority are in favour of this, not of Russian becoming a second State language.

People were asked what the state policy should be with respect to the Russian language.  42% in western, and 24% in central oblasts thought Russian should be removed from official life, against 13% in southern and 3% in Donbas and other eastern oblasts.

37% in southern and 31% in Donbas and other eastern oblasts said Russian should become a second State language, against 6% in western and 8% in central oblasts.

There was less difference regarding the possibility of local populations deciding to make Russian a second official language, with 44% in support in western oblasts; 57% in central; 43% in southern and 61% in Donbas and other eastern oblasts.

The problem is that when the facts don’t suit, they are ignored or distorted.  The KIIS survey results are so bad for Russia that they will probably not be reported at all.

It is absolutely standard for pro-Kremlin media to claim that the Ukrainian government (often referred to as the ‘junta’) who took over on Feb 22, 2014 immediately brought in a law restricting people’s right to use the Russian language.

On Feb 23 Ukraine’s new parliamentary majority did indeed blunder in where care and sensitivity was required by voting to revoke the 2012 language policy law.  This highly contentious law claimed to protect the rights of any minority ethnic group comprising 10% of the population of a region, but in fact simply allowed Russian to become the main language in a number of regions of the country.  In pushing the 2012 law through, the then President Viktor Yanukovych ignored not only widespread opposition within Ukraine, but the opinion of the Council of Europe’s Venice Commission and the advice of the OSCE High Commissioner on National Minorities, Knut Vollebaek.

Be that as it may, parliament made a bad move in trying to revoke the law so swiftly and without any public discussion, and the bill it adopted was promptly vetoed by the Acting President Oleksandr Turchynov (see Avoiding Ukraine’s language minefields).

The fact that the law was vetoed is consistently muffled in the Russian media.

Back in early 2008, Russian foreign ministry statements claiming that Russian-speakers were facing discrimination in Ukraine aroused mainly mirth.  That changed dramatically in 2014.

Moscow, for example, claimed supposed danger to Russians and Russian-speakers as pretext for its effective invasion and annexation of Crimea.  No evidence was presented for such claims, but Russian President Vladimir Putin still continues asserting that Russia averted supposed ‘bloodshed’.

Propaganda about the conflict in Donbas and about the tragic events on May 2, 2014 in Odessa also regularly speak of discrimination or even persecution of Russian-speakers.  In this narrative, the above-mentioned language law is supposed to have come into force and been the first indication of the suffering Russian-speaking regions were to face under the so-called ‘Kyiv junta’.  It is not only the Russian media that pushes this narrative.  At the end of September 2014, Russia’s Investigative Committee initiated a criminal investigation, accusing Ukraine of seeking the total annihilation of specifically Russian-speakers in the Donetsk and Luhansk oblasts.

This is no longer the fiction of fairy tales, but a narrative aimed at sowing division, stirring up hatred and causing maximum suffering and destruction.