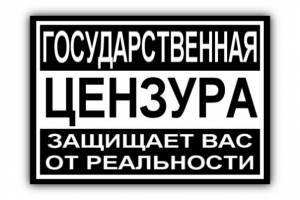 State censorship protects you from reality

In Russia and Russian-occupied Crimea, Roskomnadzor will now be able to follow what people write on social networks and private emails, while another plan underway will allow it to destroy all copies of information that the regime decides are ‘extremist’ or about ‘unauthorized’ demonstrations.

Roskomnadzor, Russia’s media and communications regulator, has been given even further powers to exercise surveillance and censorship.  Regulations passed on April 8 allow the body to check correspondence on social networks (Odnoklassniki and VKontakte), email and messenger systems (Agent.Mail.ru and ICQ).   No court order or sanction from the prosecutor’s office is required.

The new powers overturn the sole exceptions to the rules imposed on Internet providers from July 31, 2014 which obliged them to all data regarding users’ activities on the Internet, except the content of their correspondence, posts, comments and other notes.

According to the new regulations, Roskomnadzor will be able to check all correspondence, etc. with this being at the request of  “enforcement agencies carrying out investigative operations or engaged in ensuring the security of the Russian Federation”.

Recent cases where anti-terrorist or anti-extremist legislation has been applied very loosely suggest that these new powers will be used against people planning peaceful demonstrations, expressing their opposition to government policies etc.  One could add opposition figures to that list, however it seems most unlikely that they have not been under close surveillance for years.

The scope of the snooping is broad.  Providers will now have to retain (for half a year) people’s logins, list of contacts, number and size of received and passed on messages, all changes in their account or attempts to delete it.  The state can also ask when people used the Internet, from what device, which pages they visited, what paid services they obtained from Internet companies.

Ominously, any foreign server whose users give Russia as their place of residence or work or provide Russian documents as identification, etc. will have to keep information about these users.

Rosbalt.ru reports that specialists have warned of the danger that confidential information will be divulged with it being impossible to hold anybody liable.  They also believe that it will be impossible to check individuals and legal entities that are outside the Russian Federation.

The scope of Moscow’s efforts to snoop on its citizens and block information it regards as undesirable is confirmed by an article in the pro-Kremlin newspaper Izvestia “#ixzz3XBipGkru’”.  It notes that information is spread very quickly through the Internet and blocking one copy is not enough.  A new order has therefore been drawn up, the newspaper reports, that will allow Roskomnadzor to destroy all copies of information at the request of the Prosecutor General’s office “to immediately block calls to mass disturbances; extremist activities or unauthorized public events”

Virtually no peaceful protests receive permission in Russia, or if they do, they must take place in places far removed from the centre, defeating the purpose of a demonstration.  The type of information that this new order would be aimed at censoring would almost certainly include such attempted peaceful marches as a march in support of Siberia’s federalization, scheduled for Aug 17 in Novosibirsk.  Not only was that march and other similar events banned, but Roskomnadzor went into overdrive trying to remove any mention of the planned and banned event.  This included threatening Ukrainian and other foreign Internet publications that they would be blocked in Russia if they did not remove entirely innocent reports of the plans to hold the event.

What is understood as ‘extremism’ or even ‘terrorism’ in Russia can be seen in the fact that three young activists who tried to hold an equally peaceful action in Kuban have been added to Russia’s List of Extremists and Terrorists.

These new measures unfortunately apply in Crimea while it remains under Russian occupation.  As reported, abuse of Russia’s anti-extremism measures has become a major weapon used against Crimean Tatars, ethnic Ukrainians and basically anybody expressing views deemed undesirable.