Fake Odessa ‘mass riots’ staged for Russian TVPropaganda that KillsOdessa May 2 trial turns into farce as Russia continues ‘massacre’ propagandaBad Start to Crucial Odessa May 2 TrialsRussia’s New Odessa FileOdesa "Massacre" Propaganda vs. the FactsDangerous silence over police role in Odessa May 2 eventsWithout Double StandardsWhat Russian TV won’t show about the events in OdessaCVU: Pro-Russian activists sold information about pro-Ukrainian activists in OdessaUHHRU condemns police role in Odessa tragedyAnother fake Ukrainian separatist stunt with the trail from Odesa to Moscow‘Separatism’ in Lviv – For Money and Russian PropagandaRussian passports handed out in Transnistria as “tension rises”Children abducted, used as weapons and killed in Russia’s war against Ukraine Chief Rabbi of Odesa: “Ukraine is the safest country in the world for Jews” Odesa Christian, Jewish and Muslim faiths unite for Ukraine and against Russian aggression Odesa student imprisoned in Russian-occupied Crimea for pro-Ukraine leaflets Russia’s Lie Machine Fans Flames of Odesa ‘Massacre’Main suspect in Odesa 2 May 2014 tragedy given high-ranking post in Russian-occupied Crimea
• Topics / Politics and human rights 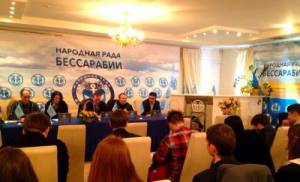 The Russian media are full of reports about “alarming” arrests and intimidation in Odesa of members of a newly-formed ‘People’s Council of Bessarabia’ who were merely trying, so the reports say, to defend the rights of the area’s national minorities. The reports certainly are alarming, but for different reasons.  Representatives of national minorities in Odesa have condemned the formation of this body as a provocation, deny its claims about discrimination and persecution and challenge its members to identify themselves and explain why they’re seeking a repetition of the scenario in eastern Ukraine..

The Russian reports by, among others, the official TASS news agency, mix up two different although not unrelated stories in order to come up with mass arrests of “citizens of the Odesa oblast who joined together in the People’s Council of Bessarabia.” Concentration on the ‘Council’ is perhaps not surprising given that its website is registered in Russia, its members and foreign supporters like the Bulgarian far-right Ataka party, known for their pro-Russian position.

The presentation of the ‘Council’ as defending national minorities, which the Kyiv ‘junta’ is oppressing, is at serious odds with reality for a number of reasons.

Since there are different, intertwined stories, a few words first about the bomb blasts which began in April 2014, soon after well-armed Kremlin-backed militants began seizing control in the Donetsk and Luhansk oblasts.  There have been around 25 terrorist acts with a number of these targeting volunteer organizations helping the Ukrainian military.

On the night of April 8-9, 2015, the SBU [Security Service of Ukraine] swooped on one specific gathering point and homes, detaining 27 people, most of them activists from the ‘Orthodox Cossacks, ’ but also some Afghanistan war veterans. Dumskaya notes that the ‘Orthodox Cossacks’ were involved in the protests on Kulikovo Pole and the tragic disturbances and fire of May 2.  Seven of them are among those detained on charges of taking part in the disturbances.

The SBU assert that they have uncovered a terrorist group, which was involved in intelligence and recruitment work, have organized a corridor for weapons and ammunition and was planning terrorist acts and murders of politicians, including MP Oleksiy Honcharenko.  SBU head Valentin Nalyvaichenko asserts that the people detained were planning a breakaway formation – a so-called ‘Odesa people’s republic, ’ like the self-proclaimed ‘Donetsk and Luhansk people’s republics.’

TASS preferred to just fleetingly mention the charges of terrorism, using inverted commas for the word, before returning to its report on the ‘Council.’ This gave the impression of far more arrests and implied false charges against the supposed champions of minority rights.

Defenders of the rights of Bessarabian national minorities?

According to the appeal to President Petro Poroshenko “In connection with human rights violations in Odesa” issued by the ‘People’s Council of Bessarabia’ and liberally quoted by the Russian media, Ukraine’s SBU have unleashed one serious wave of persecution. Twenty participants in the conference were, they say, “detained and subjected to repressive measures, ” while their guest, the leader of the youth faction of the above-mentioned Ataka party was beaten. The leader of the ‘Council’ Dmitry Zatuliveter has disappeared without trace.

The appeal asserts that the “international community has already condemned the repression against the ‘People’s Council of Bessarabia, ’ and lists the representatives of this international community. They include Mihail Formuzal, Governor of Gagauzia (in Moldova) [which researcher John Haines describes as “vocally pro-Russian”] and Vasily Tarlev, ex-Moldovan prime minister and now leader of the civic movement “Friends of Russia in Moldova.” Greek Energy Minister Panagiotis Lafazanis from SYRIZA (the Coalition of the Radical Left) who was reported to have been asked by Izvestia for his response to the ‘persecution.’ The minister, who had just announced a “new chapter in Greek-Russian relations” after negotiations in Moscow, stated that “if Ukraine aspires to European standards of democracy, its attitude to minorities must be reviewed.” The ‘Council’ also cites support from Volen Siderov, founder of the Ataka Party, who was praised during a visit by delegates from this far-right party to Crimea by the occupation regime’s leader Sergei Aksyonov as having been “the only Bulgarian politician after the state coup in Kyiv who gave an objective assessment of what had happened.” Ataka representatives were among the members of Europe’s far-right, neo-Nazi and Stalinist parties whom Russia invited to act as ‘international observers’ for what they termed a referendum on Crimea joining Russia on March 16, 2014, and they also ‘observed’ the Nov 2 ‘elections’ organized in breach of the Minsk Agreement by the Kremlin-backed militants of the self-proclaimed ‘Donetsk and Luhansk people’s republics.’ Both occasions were duly ‘observed’ and praised as exemplary.

The Russian media widely reported the last pathos-filled question of the ‘Council’s’ appeal: “Is this really European democracy?”

Russian media used its own specific paintbrush in presenting the situation, however it is true that the SBU detained participants of this ‘People’s Council.’ Dumskaya.net reported on April 7 that the SBU had detained some 20 people who were being questioned, and had also searched the venue of the meeting.

“The separatist organization itself which had threatened the authorities with ‘self-determination for Bessarabia’ asserts that some of its representatives – journalist Alik Vetrov, Sergei Zagoryuk and deputy of a town council Mikhail Levkin – had been detained on the eve of the event.“ It also reported the disappearance on April 7 of the head of the ‘People’s Council’ presidium and leader of the Union of Transdniestrians of Ukraine Dmitry Zatuliveter.

Dumskaya.net goes on to note that the site of the ‘People’s Council’ is registered in Moscow and that it is made up of Odesan, Moldovan, Transdniestrian and Gagauz civic figures who espouse a pro-Kremlin position.

They claim to represent the ethnic communities of Bessarabia, yet many of these have publicly rejected such assertions. The heads of both the Association of Bulgarians of Ukraine and the Gagauz National-Cultural Society ‘Birlik’ emphatically disagree.

“Neither the Association of Bulgarians of Ukraine nor the Gagauz National-Cultural Society ‘Birlik’ have any connection with the said events, nor to the organization of any fake civic structures on an ethnic basis which propagate the ideas of federalization, running counter to Ukraine’s state system and Constitution.

We emphatically condemn the actions of the organizers of the so-called ‘People’s Council of Bessarabia’. We ask residents of the Odesa oblast to not fall for provocation from those wishing to disrupt the situation in a historically peaceful region where for two centuries representatives of over 100 nationalities have lived in peace and harmony.”

At a round table on April 8, Anatoly Fetesku, head of the All-Ukrainian National-Cultural Moldovan Association said he had only heard about the so-called ‘Council’ from the Internet and is convinced it is an act of provocation aimed at stirring up tension and misunderstanding in the region.  In her turn, Dora Kostrova from the All-Ukrainian Assembly of Bulgarians challenged these people who are trying to destroy their world to identify themselves and say who elected them.

“Let them explain why they are presuming to speak in the name of our peoples, why they want a repetition of the scenario seen in the east of Ukraine”.

One year ago, ‘people’s republics’ were being created in Donbas on the basis of organizations heavily supported by Russia, and propped up first by Russian ‘tourists’ of athletic build, later by mercenaries, Russian nationalists, as well as large numbers of Russian soldiers. Odesa was widely seen then as being the next to succumb to such so-called ‘separatism.’ Even the disturbances and tragic fire of May 2, 2014 were unable to carry that off, however efforts to destabilize the situation – through terrorist acts, fake protests, false claims of pogroms, etc. against the Jewish community – are ongoing. It seems extremely likely that the ‘People’s Council of Bessarabia’ is the latest move in a highly dangerous, Kremlin-backed play, which has already resulted in mass death and destruction.

Odesa is learning to be vigilant against not only ‘suspicious bags’.