“Our brothers are dying in the East”, yet environmental protection efforts must continue 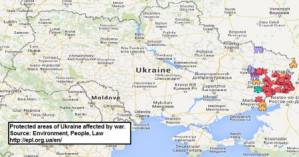 It has been a year since Russian invaders and local separatists began to claim territory in Eastern Ukraine. The central government responded with anti-terrorist operations (ATO), resulting in shifting borders in the Donetsk and Luhansk provinces. The country is in the middle of an existential crisis – yet the work of environmental regulators and public health advocates continues. Ihor Shevchenko, Ukraine’s Minister of Environment and Natural Resources (MENR), said at a recent meeting:

“Not only are our brothers dying in the East, but a series of environment threats have emerged related to environmental pollution and destruction of nature reserves. State parks are seriously suffering – 33 different sites in the protected areas of Donetsk, Luhansk, and Kharkiv oblasts were damaged during the ATO. First we must take inventory of the damage caused by military operations and identify priority actions to protect and restore these areas.”

The MENR and non-governmental organization Environment, People, Law (EPL) have identified the greatest threats to protected territories in Ukraine. The most widespread problem is fires triggered by military blasts – an estimated 17% of forests and 24% of steppes in the ATO zone were affected. Natural monuments have been directly damaged by shelling – the Holy Mountains National Park and the Kalmiuske and Kreidiana Flora areas of the Ukrainian Steppe Reserve have been scarred by explosions. The lawlessness in rebel-held territory has led to abuses, such as illegal logging and poaching. EPL put together an interactive map documenting the effects of war on nature reserves in Eastern Ukraine. 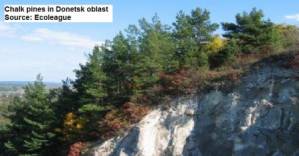 Some of the most dramatic events have occurred at administrative offices on protected lands. Several buildings were destroyed or seized by militants,  while others were simply abandoned for security reasons. There has been so much confusion about the status of these facilities that the MENR issued a statement to clarify that, as of February 2015, all five natural reserves in the Donetsk oblast are operating as normal. Three of these parks are still within the ATO zone and two are in areas controlled by Ukraine. The facilities within rebel territory are Donetsk Ridge, Meotyda, and Zuyivsky regional landscape parks – the latter was  was occupied by Russian fighters for several weeks and then liberated in January. Despite the safety risk and having not been paid for several months, park staff selflessly continue their work to protect these ecological treasures. Workers have had to extinguish fires in the steppes and forests caused by mortar and artillery shelling. They have even assisted in clearing park lands of unexploded shells.

Beyond the risk to protected territories, the Executive Director of EPL Olena Kravchenko has spoken about the damage to industry and infrastructure that effectively “set a time bomb” for future generations. EPL is studying critical issues, such as chemical and radiation risks to drinking water and the destruction of wastewater treatment facilities. They are working with MENR to document the status of hazardous waste storage sites and coal mines, hundreds of which are flooded with contaminated water. 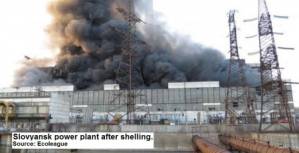 Experts interviewed by the Kyiv Post point to flooded mines as the greatest environmental threat in occupied territories. Government scientists cannot gain access to the mines to characterize risks and develop mitigation plans. Mykhaylo Volynets, leader of the Independent Trade Union of Miners of Ukraine, is especially concerned about the Yunkom mine, which was the site of a nuclear explosion in 1979 and is still filled with radioactive water. Similarly, the Oleksandr-Zakhid mine in Horlivka has been used since 1989 to store chlorobenzene and other toxins.

MENR has assigned specialists to monitor the situation in occupied territories and to restore environmental safety when they are returned to Ukrainian control. Environmental NGOs, including EPL and Ecoleague, are playing a significant role in gathering information about conditions in the ATO zone. Ecoleague has made recommendations on how to rebuild Donetsk and Luhansk based on the principles of sustainable development.

Unfortunately, a return to Ukraine’s historic borders is becoming less likely and a long-term frozen conflict may be the best-case scenario. A major springtime offensive by the Russian military is being widely predicted. The people of Ukraine are ready to rebuild – her people and the land itself have suffered enough.