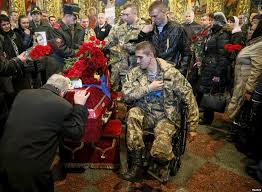 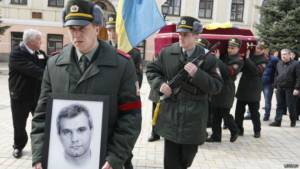 The funeral of Ihor Branovytsky at the St. Michael Cathedral in Kyiv

Released POW Yury Sova has spoken with the BBC Ukrainian Service about his time in captivity and about the murder he witnessed of cyborg Ihor Branovytsky by ‘Motorola’, the Russian leader of the Kremlin-backed Sparta battalion fighting in Donbas.  ‘Motorola’, whose real name is Arseny Pavlov gained particularly notoriety recently by boasting of having killed 15 Ukrainian POWs.

Sova, from the 80th paratrooper brigade, was taken prisoner while defending the Donetsk Airport (or what was left of it) in January 2015.  On one of the militants’ videos, he can be seen standing next to Ihor Branovytsky,   a fighter from the 81st brigade, taken prisoner on Jan 21.

12 men had remained to care for four injured comrades.  They had no ammunition left, and surrendered on Jan 21, asking the militants to take the injured to hospital.

They were taken to ‘Givi’  - the nom de guerre for militant commander Mikhail Tolstykh whose treatment of POWs also almost certainly falls under the category of war crimes.   Presumably this was to his people since there they were bandaged, given something to drink and smoke.

They were then taken to the basement where first Alexander Zakharchenko, leader of the so-called ‘Donetsk people’s republic’ spoke to them and then handed them over to Motorola.

They were taken for interrogation, Sova recounts, and says that for six or seven hours they were subjected to beating.  Asked by the BBC whether there was any interrogation at all, Sova explains that they were first beaten, then interrogated.

At that point Motorola came in. Most of the prisoners were together, and Ihor Branovytsky was lying about 2-3 metres away from Sova.  Motorola asked “what that body” was.  He was told that they had called for an ambulance, but he pulled out a pistol and, saying “so that he doesn’t suffer, he won’t live to get to the hospital”, he shot him twice in the head.

Sova confirms that Branovytsky was alive, and says that if he’d been taken to hospital, he could have survived.

The claim that Motorola was showing ‘mercy’ is especially cynical since Branovytsky’s injuries were caused by the beating he was subjected to.

Motorola told the others: “Don’t be surprised that I’m so nice, I can shoot any of you dead”

Asked why they treated a machine gunner so badly, Sova explains that they said that a machine gunner had killed one of their friends.  They answered that all the snipers and machine gunners had been killed and remained under the rubble at the airport site.  They don’t understand, he says, why Branovytsky admitted to being a machine gunner.

Asked what kind of person Ihor Branovytsky was, Sova answers:

“I met him during the night from 20 to 21 January. He was a good person, he refused to leave the airport, spent all his time with the wounded. Whenever anybody called him, he’d go immediately. He’d bring them water or a cigarette.

Stanislav Stovban is one of the men whom Branovytsky helped.  He told Kyiv Post that he owes his life to him.

Yury Sova was held in captivity for exactly one month.  He was part of an exchange of prisoners on Feb 21.  He was released while others were not because of serious injuries, and could have returned to civilian life, but has returned to his brigade.

Most of the details were in fact reported in the media earlier.  A Kyiv Post journalist spoke with Motorola on the phone who refused to comment on Branovytsky’s murder saying:

A video in English about Motorola’s suspected war crimes can be found here:

Denis Krivosheev, Europe and Central Asia Deputy Director at Amnesty International commented that ““The new evidence of these summary killings confirms what we have suspected for a long time. The question now is: what are the separatist leaders going to do about it?”

Thus far there is no evidence that either they or Moscow are planning to do anything about it.   Amnesty International’s statement about the compelling evidence of serious war crimes committed against Ukrainian prisoners of war can be read here