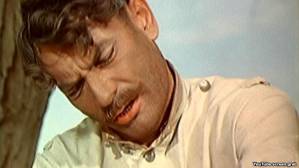 The group, which goes by the name of Mirko Sablich, was created several months ago to counter what it calls Russian "propaganda" about the deadly conflict in Ukraine’s east.

"We don’t take part in military action. We don’t know how to shoot, " group member Yevhen Tatarchenko told RFE/RL. "Words are our weapon."

Despite its relatively short existence, Mirko Sablich has already authored a string of clips, each of which has drawn tens of thousands of viewers.

The group writes its own songs and uses a collage of Soviet film excerpts and footage from war-torn eastern Ukraine to illustrate them.

Mirko Sablich’s latest clip is titled Novorossia Anthem,  in reference to the name separatists in Donbas give to the swath of land in southern and eastern Ukraine they say they are seeking to control: See the video here

The composition is a spinoff of March of Stalin’s Artillery,  a famous Soviet-era song paying tribute to the Red Army.

The spoof anthem blames Russia -- and Putin personally -- for stirring up separatist sentiment in eastern Ukraine and arming the rebels.

"Separatists, Putin gave an order!" the refrain goes. "Mobs of convicts will receive instructions on how to beat captives, on how to torture the injured, on how to blow up kindergartens full of children."

Another clip posted last month, Anthem For Ukrainian Donbas,  takes aim both at the pro-Russian separatists and at Lyube, reputedly Putin’s favorite band:

In the three-minute clip, front man Nikolai Rastorguyev -- who is also a lawmaker with the ruling United Russia party and a loyal Putin supporter -- is dubbed to make him appear as though he is performing the staunchly antiseparatist song.

The video obviously riled Lyube, whose producer succeeded in having the video pulled from YouTube, albeit temporarily.

It was later posted back on the video-sharing site, accompanied by a warning from Mirko Sablich that further attempts to block its clips will be met with "a new parody of the songs of each plaintiff."​