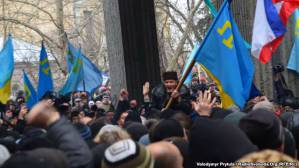 The interrogations are proving as surreal as everything else in the so-called ‘Feb 26’ case where the occupation regime is prosecuting people under Russian law over a pre-annexation demonstration which took place under Ukrainian law.  Another person has just been remanded in custody, and more arrests are unfortunately likely.

According to Eskender Bariev, coordinator of the Crimean Tatar Rights Committee, the investigation appears to involve people being taken in for questioning and shown pictures of other activists who took part in the demonstration on Feb 26, 2014, and asked to identify them.

Many are interrogated as witnesses, but Bariev believes that the investigators may later try to blackmail them.  They probably have photographs with both the people questioned and the people recognized which they will use to put pressure on the witnesses.  Bariev says that they seem to be collecting as much information as possible about particular people that they want to initiate criminal cases against.

The latest arrest was of Ali Asanov who was detained on April 15, held overnight in Bakhchysarai and then taken for questioning to Simferopol.  On April 17 he was remanded in custody for 2 months.

4 other Crimean Tatars have so far been charged, with only one recently released from custody, pending trial.

There are also frequent searches and interrogations which are also claimed to be part of an investigation into the Feb 26 events.  Most ominously, on one such occasion a search was carried out of the home of Mustafa Asaba, Head of the Belgorod Regional Mejlis, with 15 bullet cartridges ‘found’ after clearly being planted.  Asaba was later taken away for questioning, but after considerable media attention, he was later released.

The large protest outside parliament on Feb 26, 2014, was organized by leaders of the Mejlis or Crimean Tatar representative assembly to prevent an attempt to seize control of parliament.  There were effectively two demonstrations in the same place: one organized by Crimean Tatars and EuroMaidan activists, the other by the Russian Unity party run by Sergei Aksyonov.  Both the latter and his party were extremely marginal in Crimean politics, yet Aksyonov then proclaimed himself ‘prime minister’ following a parliamentary ‘session’ under Russian soldiers’ machine guns on Feb 27.

The first arrest in this supremely cynical case was that of the Deputy Head of the Mejlis Akhtem Chiygoz on Jan 29.  It is clear that he was arrested as the highest rankest Mejlis official since Russian banned the Head of the Mejlis, Refat Chubarov from entering his homeland now under Russian occupation.  Not only are the charges preposterous, but the video footage of the demonstration clearly show that both Chubarov and Chiygoz spent their time trying to calm the large crowd.

The Russian Investigative Committee in Crimea claims to have over 150 ‘witnesses’ and reports that 40 people have been given victim status.

There were two competing demonstrations yet all those targeted are Crimean Tatars whom the so-called ‘Feb 26 case’ seems overtly aimed at terrorising and intimidating.