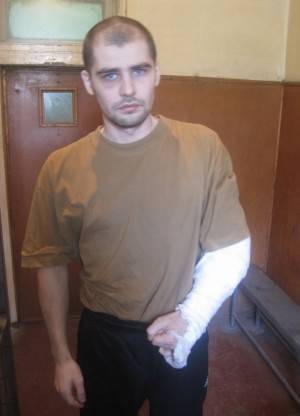 The trial is beginning in Russian-occupied Crimea of a Ukrainian citizen accused of slightly injuring another Ukrainian citizen during the EuroMaidan protests in Ukraine’s capital city before Russia annexed Crimea.  The ‘investigators’ even used Olexandr Kostenko’s Ukrainian citizenship as the pretext for holding him in custody.

Discrepancies in time and place do not end here.  EuroMaidan activist and former Crimean police officer, Olexandr Kostenko and his friends are adamant that Kostenko was arrested in Simferopol on Feb. 5.  The criminal proceedings against him, however, were only initiated on Feb 6.  The phrase attributed to Soviet dictator Joseph Stalin or his henchmen seems eerily appropriate: “Give us a man, and the charges will be found”.

The charge in this case is over an alleged offence almost exactly a year earlier, under Article 115 § 2.b  of the Russian Criminal Code (deliberately causing mild damage to health for motives of political, ideological, racial, ethnic or religious hatred or enmity, or for the same motives in relation to a social group). The investigators also threw in Article 222 § 1 (unlawfully obtaining, keeping or carrying the main parts of a firearm”) and claim that they found a rifle barrel when searching his home.  Kostenko’s lawyer, Dmitry Sotnikov asserts that this was planted on his client.

The charges are both too minor to warrant a detention order, yet the investigator claimed and the judge accepted that Kostenko needed to be held in custody because he had supposedly evaded the investigators, had not notified of the crime allegedly committed and because he is a Ukrainian citizen.

The investigators claim that in Jan 2014 Kostenko joined the EuroMaidan protest in Kyiv “in order to show armed resistance to law enforcement officers”.  On Feb 18, so the investigators’ version goes, “out of a feeling of ideological hatred and enmity to law enforcement officers” he deliberately aimed a cobble stone at V.V. Poliyenko, an officer of the Crimean Berkut special force unit.  This supposedly resulted in Poliyenko receiving an injury “in the form of a large haematoma on the left shoulder”.

Even if we ignore the fact that an alleged act by one Ukrainian national against another in Kyiv is being tried under Russian law in Crimea, the problems are still legion.  Even if Kostenko had been on Hrushevsky St. at the relevant time, it is difficult to understand what proof there could be that his cobble stone hit a specific Berkut officer.  In fact, Stanislav Krasnov, Kostenko’s former colleague whom he was with in Kyiv, rejects the charge and says that Kostenko was not on Hrushevsky St, but inside a building helping the injured.

Another claim by the investigators – that Kostenko held a leading post in the “Ukrainian radical nationalist political party ‘Svoboda’ has been rejected by ‘Svoboda’ who say that Kostenko was not even a member.

Krasnov believes that Kostenko has been deliberately targeted as revenge for the two men’s role while in the Simferopol police force.  They were both dismissed in 2013 and say that this was because exposed a case where two Crimean women were abducted and sold into sexual slavery.

As reported, Kostenko has from the outset insisted that he was subjected to torture from the time of actual detention (Feb 5) to the time officially recorded, a day later.  He alleges that the officers applied electric shocks, and that it was they who inflicted the numerous bruises and bleeding over his entire body and broke his arm and fingers.  He says that in a state of fear and under such pressure, he signed the protocols of the interrogations almost without reading them.  The protocols contain false information about how he supposedly received the injuries in Gagarin Park in Simferopol prior to his detention.  Concern over the allegations was expressed by the Crimean Human Rights Field Mission, and ignored.  This is particularly worrying given that Kostenko is in detention.  He says that he is still facing ill-treatment but is frightened by the threats he is receiving to complain to the SIZO [detention centre] management.

He says that they are trying to force him to testify against his friends and other people whom he was on Maidan with.

The pressure has not only been on him.  On April 9, twelve police officers turned up at the home of Olga Ukolova, Kostenko’s common-law wife.  They searched the premises where she lives with her 7-month-old baby and her mother, and removed telephones, memory drives and other items.  The following evening they appeared at the home of Ukolova’s brother.  He was not there, and the search was carried out in the presence of his wife Yulia Taktasheva and her small child.

His lawyer believes that all of this may be aimed at coercing Kostenko into ‘cooperating’ with the investigators, for example by claiming that there is some kind of organized gang in Crimea planning an uprising.

Crimean ‘prosecutor’ Natalya Poklonskaya is to represent the prosecution in this case and, most ominously, is talking of nearly fifty other ‘victims’, suggesting that more arrests are likely.

These so-called victims were presumably all from the Crimean Berkut unit sent by the Viktor Yanukovych regime to try to suppress the protests.  Berkut so compromised itself, especially on Feb 18 and 20 when snipers gunned down protesters, that it was dissolved under the new government.  Some officers fled to Russia or Crimea, with the latter now cast as ‘victims’ in this show trial.

Even by the standards of the old Soviet show trials, this one is specific.  The charges against Kostenko relate to protests which took place in Kyiv, Ukraine, in February 2014 before Russian legislation was imposed by Russian soldiers on Crimea.   One year later, there is no reason to trust the quality of the ‘investigation’, but even if the alleged offence had taken place, there would still be no possibility of a Crimean court having jurisdiction to hear the case.