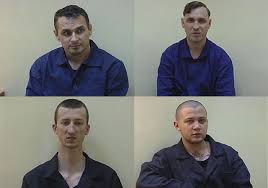 The final indictments against Crimean film director Oleg Sentsov and civic activist Oleksandr Kolchenko have, as expected, proven devoid of any elements of ‘terrorism’, yet both men are facing likely sentences of 17-20 years. In the meantime, the second of the two other opponents of Russia’s occupation of Crimea arrested in May 2014 who ‘confessed’ and agreed to cooperate with the prosecution, has been found guilty as charged and sentenced to 7 years imprisonment, the minimum on charges purportedly linked with terrorism. .

The trial of Oleksy Chirniy began and ended in a Rostov on the Don court on April 21 with the judge removing one of the defence lawyers from the case after Ivan Novikov stated that his client appeared to have falsely incriminated himself.  The prosecution had asked for 12 years, which looks like an attempt to hide the obvious deal reached with a second defendant.  The ‘trial’ was certainly over in record time with the same 7 year sentence as that handed down to Gennady Afanasyev in a closed court in December 2014.

Chirniy was found guilty of planning to organize explosions on the night before Victory Day [May 9] near the Eternal Flame and a monument to Lenin in Simferopol, as well as arson attacks on the Russian Community of Crimea and the offices of the United Russia party.

As reported, on May 30, 2014, the FSB announced that Sentsov, Kolchenko, Afanasyev and Chirniy were members of a Right Sector ‘diversionary terrorist group’.  Their main aim, the FSB claimed, was to carry out ‘diversionary-terrorist’ acts in Simferopol; Yalta and Sevastopol, and in the last of these to destroy a number of buildings, railway bridges and power lines.

The FSB asserted that the men had planned to detonate home-made explosive devices during the night before Victory Day near the Eternal Flame and near a monument to Lenin.   They were also accused of arson attacks on a pro-Russian organization’s building on April 14 and the United Russia offices on April 18.

The report on May 30 asserted that searches of the men’s homes had found the following: ‘explosive substances; firearms; ammunitions; canisters with inflammatory liquid; construction masks (similar to those used during the disturbances on Maidan); respirators; gas masks; aerosol cans with paint; nationalist symbols, etc.”

The announcement coincided with reports on pro-Kremlin television showing ‘confessions’ given by Afanasyev and Chirniy.

The charges have since been considerably watered down, to the point where in no case would there be real elements of terrorism, even were the ‘confessions’ to be genuine.

The investigators seem to have quietly shelved the original ‘Right Sector’ plot claims, with the reports from Chirniy’s trial mentioning only that the Russian authorities consider Chirniy to have been a member of the right-wing nationalist Right Sector party which Russia recently designated as terrorist.  There is no evidence of Sentsov’s involvement in this right-wing organization, and the suggestion that Kolchenko, a left-wing anarchist, could have taken part was simply absurd.

The final indictment which Sentsov received on April 16 retains the charge of creating a terrorist organization, as well as the illegal arms possession charge added the day after the Parliamentary Assembly of the Council of Europe [PACE] demanded Sentsov’s release.  Dmitry Dindze, Sentsov’s lawyer has signed an undertaking to not disclose details about the case and is prepared to say only that there are significant differences in the April 16 document from the original charges.  This was, in fact, known since more detail is available about the charges against Kolchenko, and the two men are to be tried together,

The basic charges against Kolchenko are also those presented at the outset (participation in a terrorist group and a terrorist act committed by an organized group), however he is accused of one specific act.  Kolchenko does not deny that in April 2014 he was involved in an incident where a Molotov cocktail was thrown at the Simferopol offices of the United Russia political party.  While doubtless politically motivated, it can only be called an act of hooliganism, one that was carried out late in the evening when the offices would be deserted.  The same applies to the charges which Chirniy and Afanasyev ‘confessed to’.  An explosion near the Eternal Flame at any time, but especially the night before Victory Day, would be morally repugnant, but hardly terrorism.

The FSB [Russia’s Security Service] decided, however, to claim that the Molotov cocktail was a ‘terrorist act seeking Crimea’s ‘secession’ from Russia’.  Sentsov also appears to be charged with being “the organizer of terrorist acts aimed at destabilizing the activities of the Russian authorities on the territory of Crimea”.

The phrases are eerily close to those which have been used by the occupation regime to claim that Crimean Tatars or people gathering with Ukrainian flags to remember the poet Taras Shevchenko are engaged in ‘extremist activity’, or to justify the silencing of TV ATR and almost all other Crimean Tatar media.

In this case Crimeans who peacefully expressed their opposition to Russian occupation have been charged with terrorism.  The charges are offensive and lacking in any substance yet Sentsov and Kolchenko’s refusal to buckle under and ‘confess’ seems dangerously likely to result in them being ‘punished’ with maximum sentences.

An international campaign has been launched in support of Oleg Sentsov, with a particular initiative coming from, among others, a Moscow film director Askold Kurov.  While some of his compatriots have remained worryingly silent about the fate of their colleague, Kurov, together with Ukrainian film director Andriy Litvinenko, Sentsov’s producer Olga Zhurzhenko and others are raising money now to produce a film about Sentsov aimed at drawing attention to his situation.

A number of film directors have already made video appeals on his behalf, with even those who were not personally acquainted with him certain that “Oleg Sentsov is a film director, not a terrorist” (Pavel Bardin) and these will form part of the film.

Oleg Sentsov and Oleksandr Kolchenko both need support and maximum publicity.  Please help bring their cases to the attention of the media in your country, and ask government representatives to raise the issue of their release.

These are only the first video appeals with most in English, and those that are not with English subtitles.