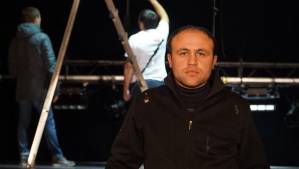 Eskender Nebiyev, cameraman for ATR, the Crimean Tatar TV channel which Russia recently forced off air in Russian-occupied Crimea, is reported to have been detained on Monday after a search was carried out of his home. ATR Deputy Director General Lilya Budzhurova reported the detention without any details, however later reports, citing ATR colleagues, suggest that he has been arrested and may be facing charges in the so-called Feb 26, 2014 ‘case’.

This detention comes just over a week after a former ATR cameraman, Amet Umerov was questioned by officials of the Centre for Countering Extremism who also carried out a search of his home.  It was never quite clear why they descended on Umerov and searched the home he shares with his wife, small child and elderly parents for explosives, weapons, prohibited literature, etc. Umerov said later that there had been 6 other people waiting to be questioned in the Centre, two of whom appeared to be Crimean Tatars.

The prosecutions now underway under Russian legislation over a pre-annexation demonstration which took place under Ukrainian rule and law seem like part of a general policy aimed at intimidating and frightening Crimean Tatars into silence or exile.  One of the most effective weapons is surely the lack of any foreseeability.

The large protest outside parliament on Feb 26, 2014, was organized by leaders of the Mejlis or Crimean Tatar representative assembly to prevent an attempt to seize control of parliament.  There were effectively two demonstrations in the same place: one organized by Crimean Tatars and EuroMaidan activists, the other by the Russian Unity party run by Sergei Aksyonov.  Both the latter and his party were extremely marginal in Crimean politics, yet Aksyonov then proclaimed himself ‘prime minister’ following a parliamentary ‘session’ under Russian soldiers’ machine guns on Feb 27. Two people died that day: one elderly man of a heart attack, and another elderly woman died later in hospital, possibly after being crushed by the crowd.

Prior to any developments on Monday, five people were facing charges over this ‘case’, with these including Akhtem Chiygoz, Deputy Head of the Mejlis or Crimean Tatar representative assembly.  Chiygoz was arrested on Jan 29 and is still in custody.  As well as the legal nihilism inherent in the prosecution in general, there is also ample video footage indicating that Chiygoz, together with the now banned Head of the Mejlis Refat Chubarov and other Mejlis officials, were intent throughout on calming the crowd and preventing bloodshed.

The last arrest had been on April 15, with Ali Asanov taken for questioning to Simferopol, then on April 17 remanded in custody for two months.

The Russian Investigative Committee in Crimea claims to have over 150 ‘witnesses’ and reports that 40 people have been given victim status.   It is clear that even though there were two demonstrations, all those targeted for prosecution are Crimean Tatars.

This is not the only case where the Russian occupation regime is showing a disturbing lack of respect for fundamental principles of law.  The trial began on Monday of Oleksandr Kostenko who is also accused of injuring a Berkut officer on Feb 18 in Kyiv.  Even were there any way of proving that the alleged offence took place, both parties were Ukrainian nationals and there is simply no justification for a prosecution and trial in Russian-occupied Crimea.

There is still no news of another Crimean Tatar human rights activist and member of the Contact Group on Human Rights, Emir-Usein Kuku who was taken away after police arrived at his home in Yalta on Monday morning.