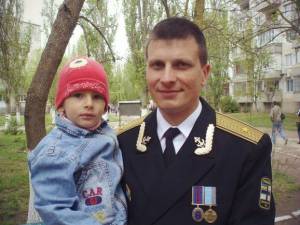 The Russian soldier who shot Stanislav Karachevsky in cold blood on April 6, 2014 has reportedly been sentenced to 2 years imprisonment. Mark Feygin, the lawyer defending Nadiya Savchenko, reports that on March 13 a Crimean military court convicted Russian sergeant Yevgeny Zaitsev of killing Karachevsky in a hostel in Novofedorovka where the Ukrainian military personnel from the Saki military base in Crimea were living before being moved to mainland Ukraine.

The Crimean Human Rights Field Mission earlier reported that three court hearings were held in February over the case under Judge Rizvan Zubairov, who previously worked in a Grozny [Chechnya] military court.

Zaitsev was never taken into custody and has continued his military service as before the killing. Witnesses at the court say that Zaitsev was not under convoy guard, nor was he in handcuffs.

This is in marked contrast to Russian treatment of Nadiya Savchenko who is held in a ‘cage’ during court hearings, and brought to the courts by a formidable number of convoy guards. She has been held in custody now since being kidnapped from Ukraine in late June 2014.  The prosecution asks for extensions to her detention and all courts oblige despite the circumstances by which she was illegally taken to Russia, the fact that she has an irrefutable alibi, the grave danger to her life and health because of her prolonged hunger strike in protest and much more.

The same is true of Crimean film director Oleg Sentsov and civic activist Oleksandr Kolchenko who have been in custody since May 2014.

Oleksandr Kostenko was arrested on Feb 5 in Simferopol and has been in custody ever since despite the charge against him being one for which detention is not envisaged. The investigators nonetheless demanded it, claiming among other things, that it was needed because Kostenko is a Ukrainian national.

During the first hearing on Monday, April 20, the ‘prosecutor’ installed after Russia’s occupation of Crimea, Natalya Poklonskaya claimed that the trial over an alleged offence on Feb 18, 2014 in Kyiv could take place in Crimea because both defendant and alleged victim are supposedly Russian nationals.  Kostenko never took Russian nationality and remains a Ukrainian citizen, as do Sentsov and Kolchenko though Russia is attempting in their cases to also claim that they are Russian nationals.

Deputy Head of the Mejlis, or Crimean Tatar representative assembly has been in custody since Jan 29 charged over a demonstration which took place before Russia’s annexation of Crimea.  Cameraman for Crimean Tatar TV ATR which was forced off air at the end of March was remanded in custody on April 22 charged with taking part in the same pre-annexation event which he was covering in his professional capacity.

The murder of Stanislav Karachevsky is not the only killing of a Ukrainian which the occupation regime appear uninterested in fully investigating and / or handing down appropriate punishment.

Crimean Tatar Reshat Ametov, 39-year-old father of three young children, was abducted by pro-Russian paramilitaries in March 2014 from his lone picket in protest at Russian occupation outside the Crimean parliament. His badly mutilated body was found almost two weeks later. Despite video footage of the abduction, no arrests have been made and his brother was told in January this year that the investigation had been terminated.  There were reports a week ago that the investigators now ‘know’ the name of the person who abducted Ametov but that he is out of reach, being on the territory of the self-proclaimed ‘Donetsk people’s republic’.  No further information was made available, and there do not seem grounds for assuming a sudden interest in ensuring that the brutal killers are brought to justice.

Yevgeny Zaitsev has said that he will be appealing against his conviction.  Presumably the appeal will be based on assertion that he did not commit the crime, not that a Ukrainian soldier’s life justifies an even shorter sentence.