Fears on the eve of Chornobyl anniversary: is nuclear power in Ukraine safe? 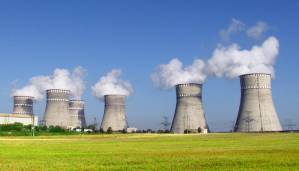 Despite Ukraine’s tragic experiences with nuclear power, there are legitimate reasons why it is an attractive energy source for this struggling country. But a recent study raises concerns about the safety of nuclear reactors operated beyond their design lifetime.

Ukraine currently has 15 nuclear reactors operating at four locations. The Zaporizhia plant, with six reactors,  is the largest nuclear power plant in Europe. The other three facilities are in Rivne, South Ukraine (in the Mykolayiv oblast), and Khmelnytsky. Together these stations provide 47% of Ukraine’s electrical power.

The Chornobyl disaster occurred on April 26, 1986 – it is considered the worst nuclear power plant accident in history. The accident involved an explosion and fire that released radioactive contamination, causing the death of dozens of rescue workers. According to the World Health Organization, as many as 4, 000 people may eventually lose their lives due to a delayed cancer effect.

After Chornobyl, it would be natural to expect that the people of Ukraine would want to disinvest from nuclear power. But the easiest alternatives all have their own shortcomings which have been magnified by the ongoing war with Russia. At 45%, the second largest source of electricity in Ukraine is thermal energy, which includes coal, oil, and natural gas. Oil and gas are mainly imported from Russia, so obviously Ukrainians would favor reducing dependence on these fuels. Even before Ukraine’s coal mines of the Donbas region fell into occupied territory, there were severe problems with this dangerous, antiquated, and highly polluting industry. 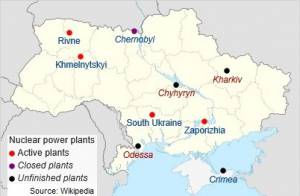 Nuclear power has presented Ukraine with the opportunity to be energy self-sufficient. As the reactors at Chornobyl were all eventually shut down, the government made plans to expand capacity at other existing stations and to build entirely new power plants in Kharkiv, Odesa, and Chyhyryn, in the Cherkasy oblast. Just last month, Ukraine signed an agreement to increase electrical production at the Khmelnytsky plant for export to Poland as part of the Ukraine-EU “energy bridge”.

The original lifetime of Soviet nuclear reactors was 30 years. The State Nuclear Regulatory Inspectorate of Ukraine granted a 20-year extension for the oldest two reactors at the Rivne plant in 2010. The agency also has plans to give 20-year life extensions to all of Ukraine’s older nuclear reactors. The extension at South Ukraine reactor #1 was contingent on significant safety upgrades performed in 2013. The European Bank for Reconstruction & Development and Euratom have committed a total EUR 1.4 billion to implement 87 safety measures to address design safety issues at Ukrainian nuclear reactors. The reactor life extension program has been challenged under the UN Convention on Environmental Impact Assessment in a Transboundary Context, informally called the Espoo Convention, for lack of a proper environmental impact assessment.

In March 2015, the National Ecological Center of Ukraine (NECU) published a report critical of the lifetime extension granted to the South Ukraine reactor. Their study revealed that the reactor pressure vessel in Unit #1 exhibits signs of wear beyond tolerable limits and that the vessel’s metal casing is at risk of developing micro-cracks. These vulnerabilities could lead to a release of radioactivity inside the unit or even the outside environment.

NECU also criticized the methods used in the government’s structural assessment of the reactor. Energy policy expert Tatiana Verbytska has called for a comprehensive assessment of nuclear and radiation safety at South Ukraine’s Unit #1, which should be the basis of keeping or potentially rejecting the lifetime extension. A thorough assessment should also be undertaken for South Ukraine’s Unit #2 and Zaporizhia’s #1, both of which have lifetime extensions up for consideration this year. In Ms. Verbytska’s words:

“The price of the mistakes in nuclear safety assessments is too high for Ukraine to bear, especially under the current economic situation and a de-facto war in the east of the country.”

Unfortunately, NECU representatives have observed that European NGOs express more concern about nuclear safety in Ukraine than Ukrainians themselves. Forty organizations from across Europe signed an open letterfrom CEE Bankwatch Network and Greenpeace, which declares:

“European environmental groups are alarmed by the fact that the Plant Lifetime Extension (PLEX) of the old nuclear units in Ukraine is on-going without environmental impact assessments (EIAs) and with no transboundary consultations despite Ukraine’s obligations under EBRD/EURATOM’s loans for Nuclear Power Plant Safety Upgrade Program.”

So is nuclear energy truly Ukraine’s best bet for energy independence? Building on the existing nuclear infrastructure is clearly a viable approach for the near future. The Ukrainian government must be careful in their review of existing reactors and when planning expansion projects. They should take advantage of available expertise from European and North American counterparts.

Currently, 8% of Ukraine’s electricity comes from sources other than nuclear and fossil fuels. This “other” category is mainly comprised of hydroelectric power. Now is a critical time to invest in other clean renewable sources, including solar, wind, and biomass. This path offers a future of greater energy independence and a cleaner environment for Ukraine.