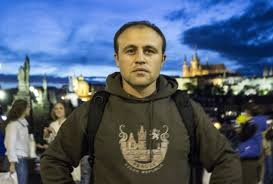 A Simferopol court on Wednesday ordered the detention of TV ATR cameraman Eskender Nebiyev who is charged over a pre-annexation demonstration on Feb 26, 2014, that he was covering in his professional capacity.  This is the latest arrest in a ‘case’, breaching both Russian and international law, where the occupation regime is clearly targeting Crimean Tatars, including Akhtem Chiygoz, Deputy Head of the Mejlis, or Crimean Tatar representative assembly.

As reported, Nebiyev was first detained on Monday April 20, after a search was carried out of his home.  He has been charged with ‘taking part in mass disturbances’ under Article 212 § 2 of the Russian Criminal Code and could face from 3 to 8 years imprisonment.  This new arrest marks a further escalation in repressive measures in Crimea under Russian occupation with a clear message being sent to media representatives that they can face prosecution for coverage of demonstrations.  It is no accident that an ATR employee should have been targeted, with Sergei Aksyonov, Crimean ‘leader’, imposed when Russian soldiers seized control in Feb 2014, having stated on at least 2 occasions that he considered the only Crimean Tatar television channel to be a hostile element that gave people the hope that Ukrainian rule would be restored in Crimea.  ATR, together with all but one other Crimean Tatar media, was forced off air at the end of March 2015.

This arrest is the sixth so far over the so-called ‘Feb 26, 2015’ case, with five people held in custody. Akhtem Chiygoz was first arrested on Jan 29, with the occupation regime’s ‘prosecutor’ Natalya Poklonskaya claiming that he was accused of committing a serious crime carrying a sentence of up to 10 years imprisonment.

It is difficult to know how to describe a case in which not only are the accusations against specific individuals clearly fabricated, but where the entire prosecution is in flagrant violation of all principles of the rule of law.

The demonstration which the occupation regime is terming ‘mass disturbances’ took place on Feb 26, 2014, the day before Russian soldiers seized control of government buildings in Simferopol.  This was therefore under Ukrainian legislation, with the participants Ukrainian nationals.

A court in Russian-occupied Crimea quite simply has no jurisdiction over this supposed ‘case’.

The large protest outside parliament on Feb 26, 2014, was organized by leaders of the Mejlis to prevent an attempt to seize control of parliament.  There were effectively two demonstrations in the same place: one organized by Crimean Tatars and EuroMaidan activists, the other by the Russian Unity party run by Sergei Aksyonov.  Both the latter and his party were extremely marginal in Crimean politics, yet Aksyonov proclaimed himself ‘prime minister’ following a parliamentary ‘session’ under Russian soldiers’ machine guns on Feb 27.

In an earlier article appropriately entitled ‘The Criminal Code and the Time Machine’, Novaya Gazeta correspondent Irek Murtazin wrote that the investigators were claiming that “Crimea became ours back on Feb 26, three weeks before annexation”.  He pointed out that this case demolishes the always implausible claim by Russia that Crimea’s ‘joining’ of the Russian Federation was a solely local Crimean initiative.

“In trying to pin crimes on the Crimean Tatars, the investigators will have to prove that a year ago in the centre of Simferopol actions were committed that there were against Russia’s interests. This is because in accordance with Article 12 § 3 of the Russian Criminal Code, a criminal prosecution can only be initiated against foreign nationals who committed an offence on the territory of another country if “the crime was directed against the interests of the Russian Federation or a citizen of the Russian Federation.

On Feb 26 last year Crimea was Ukrainian territory and all Crimean Tatars who are charged in this case were [and remain – HC] Ukrainian nationals. There were no Russians near the Crimean parliament on that day.”

The Crimean Tatars present wished to prevent seizure of control and a change in Crimea’s status.  That this did not suit the Kremlin was demonstrated at 4.20 in the morning of Feb 27, when, Murtazin writes, “120 armed men in full military gear but without insignia occupied the parliament and government buildings in Crimea. Russian flags were raised over the buildings, and barricades erected at the entrance.”

Since five men are now in custody and more arrests seem certain, it is worth stressing that not only is the criminal case a legal nonsense, but the specific charges also fly in the face of the evidence.

The same Novaya Gazeta correspondent reports that the investigators were clearly short of any material and invited Simferopol residents who had been subjected to force “even in the absence of bodily injuries” to come forward.  On Jan 29, the day that Chiygoz was arrested, Russia’s Investigative Committee claimed that violence had been applied “in relation to members of the ‘Russian Unity’ party and the Crimean self-defence”.*

Murtazin notes that his colleague, Pavel Kanygin was present during the demonstration on Feb 26, 2014.  His reports correspond with those from Radio Svoboda which reported when Chiygoz was arrested that their video footage clearly shows all representatives of the Mejlis seeking only to calm the crowd and prevent bloodshed.

Kanygin’s report focuses on the Head of the Mejlis, Refat Chubarov whom the occupation regime could not arrest since Russia had already banned him from his homeland back in July 2014.  Chubarov is reported to have spoken through a megaphone calling for calm after the first scuffles broke out.  Later, after the parliamentary session believed to be planning to take control was cancelled,  Chubarov and Aksyonov came out together and called for calm and for the demonstrators to disperse.  Kanygin adds that the Crimean Tatars heeded this call, not the pro-Russian demonstrators who remained and kept chanting “Russia!”

In February 2014, Russia ran roughshod over international law by invading and occupying Ukrainian Crimea.  It is now demonstrating the same willingness to re-write history and flout even its own legislation in this latest offensive against Crimean Tatars and all who oppose Russian occupation.

* The so-called ‘self-defence’ were paramilitary vigilantes who worked in cooperation with the Russian military and Aksyonov’s ‘government’.  They are believed  responsible for numerous abductions, disappearances, beatings, as well as the murder of Crimean Tatar Reshat Ametov who was abducted while protesting against the invasion outside the Crimean parliament