Ex-Berkut officers arrested on suspicion of involvement in Maidan killings 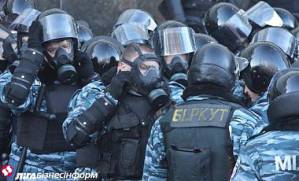 The Prosecutor General’s Office has informed that three former  Berkut riot police officers have been charged with involvement in the killing of protesters on Feb 18, 2014, one of the two bloodiest days of EuroMaidan.  The three men, who were all still working in the Interior Ministry, one in a managerial post, were all remanded in custody by the Pechersky District Court in Kyiv on April 23.

According to , during the police dispersal of the peaceful procession to the Verkhovna Rada on Feb. 18 5 people were killed, 62 received gun injuries and a further 400 – other injuries. The PGO asserts that they have established the involvement of the above-mentioned officers of the then Kharkiv regional Berkut.

The former commander of the Berkut unit and two subordinates have been charged under Article 365 § 3 (exceeding official duties with this leading to grave consequences), Articles 15 § 2 and 115 § 2 (attempted murder).  The charges seem to suggest that the men are not directly accused of killing anybody.

The PGO report repeats at least twice that it is investigating the crimes and those responsible will be held to answer.

These new arrests come just over three weeks after a fairly damning by an International Advisory Panel.  This body was charged with overseeing the investigations into the violence from Nov 30, 2013 to Feb 21, 2014, and specifically whether they met the requirements of the European Convention on Human Rights and European Court of Human Rights case-law.

The Panel’s answer to the latter question was unfortunately negative, finding that in many ways they had not met those requirements.  It criticised the lack of ‘practical independence’, and also said that the investigations had been ineffective for a number of reasons.  These included:

lack of continuity in PGO leadership and ineffective allocation of investigative work.

One specific example was in connection with the absconding of Dmytro Sadovnyk.  As reported, Sadovnyk, who together with two Berkut subordinates, was in custody, was released on Sept 19, 2014 and promptly disappeared.   He has been placed on the wanted list.   Sadovnyk was in charge of the Berkut special force unit suspected of shooting 39 EuroMaidan protesters.  Given that the charges against him were so serious, the court had to provide grounds for changing the restraint measure to house arrest.  Those given were that he has a wife, three children and a flat in Kyiv, and a good character reference.

The Panel’s report states that although the PGO representatives were hesitant to hand out blame for Sadovnyk’s escape, “their submissions to the Panel pointed to the Ministry of the Interior”.

Serious criticism of the Interior Ministry led to angry response from high-ranking representatives of the latter. Those made public so far have focused mainly on criticizing the Panel, rather than demonstrating that the specific criticisms are wrong, though perhaps these are being prepared.