A World That Didn’t React and Isn’t Now“Not one country reacted”: 71 years since the Liberation of AuschwitzWładysław Bartoszewski: Appeal to the World over Auschwitz-Birkenau
• Topics / We remember

Władysław Bartoszewski: A Life as Testimony to the Truth 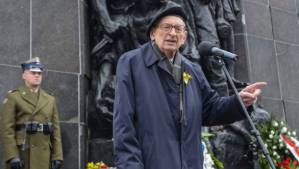 Władysław Bartoszewski has died in Warsaw at the age of 93.  He was one of the people in this world it would have been a true honour to have met, and his passing is a great loss not only for Poland.

“You can expect bravery, heroism, from people, you even should expect it, however you also need to allow for the fact that they’re people. The Catholic Church expects holiness from believers, yet what percentage fulfils those expectations?  I don’t know.  However I know that there were and are such people. There are few of them, but they exist. And I’m glad of that.”

Władysław Bartoszewski was one such person.

He was just 18 when in September 1940 he was seized by the Nazis and imprisoned in Auschwitz.  He was to be released in April 1941, but then went on to be active in the Polish Resistance and especially in  Żegota, the Polish Council to Aid Jews,   He was a member of Armia Krajowa and took part in the Warsaw Uprising in 1944.

He was a historian both by profession and by moral obligation. In the introduction to a recent book about Żegota he wrote:

“I was one of those who considered such research to be my moral duty.  Since I had survived and so many others – acquaintances and people I didn’t know, Poles and Jews – had perished, I had to bear testimony to the truth.”

One of his first works Perścień Śmierci chronicled all the crimes committed by the Nazis during the Second World War and their victims in Warsaw.  It was written in part out of frustration that so many of the criminals had escaped punishment.

Another – Ten Jest z Ojczyzny Mojej – was one of the first documented records of Poles who helped Jews to survive during the Nazi occupation.  The title is from a poem by Antoni Słonimski in which the poet writes that he who can forget about his own country and feel a brother of all those – a Jewish mother, the Czech people, Ukrainians, , Yugoslavs, Ukrainians – who are suffering, “that person is from my Motherland. He is a man”.

Władysław Bartoszewski was certainly such a man, while always a true patriot of Poland.  He was arrested and imprisoned by the Soviet-imposed communist regime and later interned for a period during martial law.

From 1989 when Poland became free he played an active role in political life, serving twice as Minister of Foreign Affairs, while continuing his work as a historian.

The list of honours is too long to cite, however one is too poignantly appropriate to omit:  in 1965 for his role in saving Jews during World War II. Yad Vashem named him one of the Righteous of the Nations.

Please see also “And the world did not react” (on the 65th anniversary of the liberation of Auschwitz-Birkenau).

Władysław Bartoszewski was one of those who – during the War, but not only – always reacted.

“There was one choice: either I accept what I regard as evil, or I refuse to accept it. No other”