Yet another charge concocted against Nadiya Savchenko 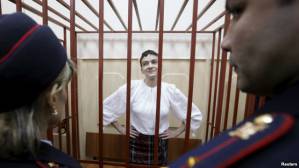 At a court hearing on April 17

Update:  It has been announced that Nadiya Savchenko has renewed her hunger strike.  She has not eaten now for three days in protest at the absurd indictment

Russia’s Investigative Committee has presented Nadiya Savchenko with the “indictment in its final version”.  As expected, the investigators are seriously charging the former pilot captured by Kremlin-backed militants and taken against her will to Russia with illegally crossing the border (Article 322 of the Russian Criminal Code).  She is also charged with abetting the killing in a publicly hazardous manner of two or more people out of political hatred, as an act committed by a group and of attempting, as part of a group, to kill two or more people out of the same political hatred.  All of the latter are under Article 105 and carry sentences of up to life imprisonment.

The investigators assert that on the morning of June 17, Savchenko climbed a telephone tower, and from 150 metres up, at a distance of 3.5 kilometres she used binoculars to follow the movement of civilians at the checkpoint near Metalist.  Then with some unidentified equipment, she informed of their coordinates and shelling was carried out.  According to one of Savchenko’s lawyers Ilya Novikov, this “deranged nonsense” is also new, and easily refuted since the defence has already fully established what Savchenko was doing that morning.

It was clear soon after Savchenko was kidnapped to Russia and first remanded in custody by a Russian court, at the beginning of July 2014, that she was to be charged with providing information about the whereabouts of two journalists – Igor Kornelyuk and Anton Voloshin – which supposedly enabled the Ukrainian military to deliberately kill them.  There is no evidence that anybody tried to kill the Russian Pyervy Kanal journalists.  There is, however, considerable proof that Savchenko had already been taken prisoner somewhere else altogether before the men died in mortar fire.  This both the ‘investigators’ and the court are stubbornly ignoring.

The Investigative Committee has now added abetting attempted murder with this explained as being because “during the artillery shelling in which Igor Kornelyuk and Anton Voloshin died, other civilians nearby could have been killed”.

This is surely the point that civilians and journalists can get caught in crossfire.  From the first day Russia’s Foreign Ministry and pro-Kremlin media began claiming that the journalists had been targeted, and had died “for telling the truth” (which is something that, at least while reporting in eastern Ukraine, Kornelyuk did not once do). This is in marked contrast to Moscow’s silence over the death of Russian journalist and human rights activist Andrei Mironov who was killed in May 2014 while accompanying Italian photographer Andrea Rocchelli in an attempt to find out the truth about how the violence was affecting the lives of Sloviansk residents.

This ‘final version’ does, however, omit the charge that the alleged victims (Kornelyuk and Voloshin) were targeted in connection with their professional activities.

The first suggestion that Savchenko could be charged with ‘illegally crossing’ the border over which she was taken, she alleges in handcuffs and with a bag over her head was in October last year.  The charge was, however, only laid on Jan 29, within a day of the Parliamentary Assembly of the Council of Europe [PACE] issuing a resolution demanding that their member and Ukrainian MP Nadiya Savchenko be released within 24 hours.

Another charge was attempted in February when Savchenko’s lawyer Mark Feygin pointed out that Article 356 § 1 had been slipped into the indictment without any new circumstances or evidence presented.  The article in question concerns liability for the use of prohibited means and methods of warfare, including ill-treatment of POWs or civilians, deportation of civilians, or plundering national property on occupied territory.   Radio Svoboda reports that this was supposed to be  based on testimony from a “Luhansk separatist” who claimed that Savchenko had tortured him.  Even Russia’s Investigative Committee seems to have balked at the idea of getting that one through the trial and it was stated at a court hearing in late March that the article had been a mere ‘typo’.

The indictment comes on the concluding day of the Spring PACE session which Savchenko was again prevented from attending but where speaker after speaker mentioned her unlawful detention in Russia.

Nadiya Savchenko was captured by Kremlin-backed militants in the Luhansk oblast of Ukraine on June 17 last year and the militants even released a video of her interrogation on June 20.  She then appeared in a Russian court on July 3 and has been in Russian detention ever since.  Even without Savchenko’s own testimony, it overstretches credibility to suggest that between June 17 and July 3 the militants released her and she chose to make her own way – illegally! – to Russia in order to then be arrested and face charges that appear to be based solely on the militants’ claims.

Moscow and pro-Kremlin media avoid any mention of Savchenko’s capture by militants, beginning always with her supposed ‘voluntary’ arrival in Russia.  The ‘investigation’ is now in its concluding stage and must soon reach the court where all of this cannot fail to become clear to an audience which should at the very least hold fellow PACE members, Ukrainian MPs and foreign media.

This is a Russian travesty of justice at its most squalid.