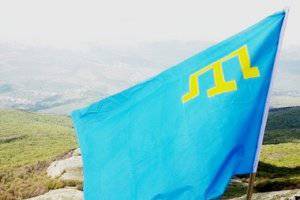 There is no official indication as to whether the occupation regime will again try to ban remembrance events on the May 18 anniversary of the Deportation of the Crimean Tatar People.  It seems likely, however, particularly given the attempts currently underway to usurp the Mejlis or Crimean Tatar representative assembly and hijack the Crimean Tatar Spring Festival [Hyderlez] on May 3.

The Spring Festival has always been organized by the Mejlis, however last year it was cancelled the day before when, less than 2 months after Russia’s invasion and annexation of Crimea, veteran Crimean Tatar leader Mustafa Dzhemiliev was banned from entering his homeland.  A joyous festival under such circumstances was unthinkable, and Crimean Tatars were invited instead to meet Mustafa Dzhemiliev at the border crossing between Crimea and mainland Ukraine on that same morning.  They were confronted by OMON riot police and ‘self-defence’ paramilitaries, with the occupation authorities using the essentially peaceful event as pretext not only for administrative fines but for a criminal case justifying arrests, armed searches and interrogations, including a summons to 80-year Veteran of the Crimean Tatar national movement Vedzhie Kashka

One year later, there is even less cause for celebration and the Mejlis decided on April 24 that it would be inappropriate to hold the festival. The festival’s fate had long been in the balance and it is possible that the occupation regime was already planning to hijack the event.  All of this has prompted a strongly-worded address from Refat Chubarov, Head of the Mejlis and himself now exiled in both Crimean Tatar and Ukrainian. 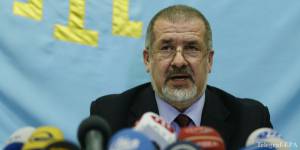 For 23 years, he says, on May 18 Crimean Tatars, “together with our neighbours of other nationalities” gathered on squares throughout Crimea and on the central square in Simferopol to remember and pray for each and every victim of the Deportation.

It was the Russian occupiers who last year prevented the remembrance gathering from taking place in the centre of Simferopol, using armed soldiers, police and so-called self-defence paramilitaries to block the central square.  All remembrance gatherings were forced to the outskirts of cities, towns and villages..

In fact, the occupation regime initially banned public gatherings altogether on what was the seventieth anniversary of the Deportation, and military helicopters flew over the gatherings on the outskirts of Simferopol and Bakhchysarai (more details here)

This year the regime has resorted to even more cynical measures, Refat Chubarov says, in their plans to ban any remembrance gatherings on May 18.  To conceal their real attitude to the Crimean Tatar people, and divert international attention from the grave discrimination Crimean Tatars are facing, the occupation regime is organizing the traditional Crimean Tatar Spring festival Hyderlez on May 3.

It became clear in early April that the occupation regime was looking for ways to prevent the traditional remembrance gatherings altogether, and to divide Crimean Tatars among themselves.  In an interview on April 6, Dmitry Polonsky, ‘deputy prime minister’’ claimed that there had been a “joint conference of all major civic Crimean Tatar organizations” on April 2.  He asserted that they had suggested that it was time to remove the focus on May 18, and that people should remember the dead at cemeteries and in their own homes, and that there should be a day of joy instead.  They supposedly proposed April 21, the day that Russian President Vladimir Putin signed a degree on ‘Rehabilitation of all deported peoples’.  This was literally the day before Mustafa Dzhemiliev, who was 6 months old when the Crimean Tatar People were deported from their native Crimea, was first handed the document stating that he was once again exiled from his homeland.

April 21 has now been formally recognized as a festive day in Crimea, however all festivities were of the strictly Soviet type, with carefully selected groups wearing Crimean Tatar costumes, etc.

The occupation regime is instead focusing on the Spring Hyderlez Festival and appears to be using covert forms of bribery to entice Crimean Tatars to attend.  At a press conference on Monday, for example, Seiran Mambetov promised that participants would have the chance to win substantial monetary prizes.

Unable to cower or bribe the Mejlis, the occupation regime has actively courted marginal groups and sought to create puppet Crimean self-governing bodies.  While exiling or arresting the heads of the Mejlis, and carrying out a policy of overt intimidation through surreal prosecutions over a pre-annexation demonstration, they are seeking to buy the loyalty or silence of others.

They will find some, of course, they always do.  It seems unlikely that many will let themselves be conned or bribed given the unabated repression which the Crimean Tatars and many other Crimeans are experiencing under Russian occupation.