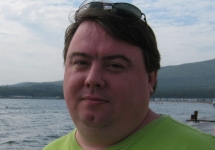 Andrei Marchenko, a Russian LGBT activist and blogger from Khabarovsk has been charged with ‘calls to extremist activity’ over a blog against Russia’s aggression against Ukraine. He could face a 4-year sentence for words which experts allegedly claim “contain calls to carry out violent actions against supporters of fascism and terror in Russia, involved in the violent seizure of Ukrainian territory”.

This prosecution, however surreal, is being taken seriously.  Marchenko is charged under Article 280 § 1 of the Criminal Code (public calls to extremism) over a post on Troitsa [Trinity Sunday] on June 8, 2014.  The post on Facebook contained the following words:

““Impale all terrorists!!!!! Kill them all!  Bloody Sunday!  Free Ukraine on Troitsa from fascists-Russians-terrorists!”

Grani.ru quotes Marchenko as saying that during his interrogation, the FSB [Security Service] officers called him the organizer of a gay terrorist underground.  They showed him printouts from a site according to which Marchencho, together with a well-known Khabarov LGBT activist Alexander Yermoshkin were the creators and inspiration for a “gay-terrorist underground” aimed at organizing an “orange revolution” in Khabarovsk.

A search was carried out of his flat, with all communications and computer technology removed.  The investigators ordered both a technical and linguistic assessment.  In September the linguistic experts were also asked to assess 5 other phrases posted on Marchenko’s page.

The Khabarovsk Regional Prosecutor confirmed the indictment on April 29, and the court trial will begin before the end of May.

Marchenko himself writes that summarizing the grounds (testimony of witnesses, expert assessments), you can conclude that he’s an ‘extremist’ because he’s gay and actively promotes LGBT rights in Russia; is against fascists and terrorists; does not support the “Crimea is ours” mentality (justifying Russia’s annexation of Crimea); is for peace and an end to the war in Ukraine; and is against Russian interference in the affairs of a sovereign state.  He mentions also opposition to the policies of Vladimir Putin and the Prime Minister (Dmitry Medvedev), adding that this is gleaned from the indictment.

The Russian authorities, with their usual disregard for the presumption of innocence,  included Marchenko in the (extensive) List of Terrorists and Extremists back in September 2014 (under no. 2207).  Around the same time his bank accounts and cards were, for some reason, frozen.

Marchenko is adamant that the FSB’s attention to his person is linked with his numerous posts in support of Ukraine and criticizing the Kremlin.

He would not be the first person to be prosecuted in Russia for verbal support for Ukraine.  A no less surreal court trial is currently underway against Russian teacher and poet Alexander Byvshev for a poem “To Ukrainian Patriots” which none of the witnesses appears to remember – or have read – but which lost him his job, and could result in a prison sentence.  See: Russian teacher on trial for poem against annexation of Crimea  and for more along the same line  Belarusian imprisoned in Russia for social network posts in support of Ukraine