Being Ukrainian is not a crime: Free Yury Yatsenko!Guilty of being Ukrainian: Russian court sentences Maidan activist to 2 yearsRussia’s Geopolitical PrisonersPunitive psychiatry used against Crimean ‘terrorist plot’ suspect?Crimean ‘terrorist plot’ suspect in Russian psychiatric wardRussia’s FSB launches first Crimean show trial’Terrorism’ trials for Crimean film director and other opponents of annexationUkrainian film producer facing Russian ‘terrorism’ chargesRussian FSB detains Ukrainian film producer in Simferopol"One message to FSB: You didn’t break me and Ukraine cannot be broken"Former Kremlin hostages put release of all Ukrainian political prisoners on the agenda Ukrainian justice based on false police reports: From Maidan to former Kremlin political prisonerEx-Kremlin hostage Sentsov calls out Zelensky over flagrant violations in Sheremet caseSentsov: Whenever you think of friendship with Putin and Russia, remember the 13,000 Ukrainians killed and hundreds imprisonedHow can Russia deny responsibility for MH17 when it gave up Sentsov, others to get key witness out of Ukraine?Home at last! 24 POWs and 11 political prisoners, including Oleg Sentsov arrive in KyivRussia claims torture used to imprison Sentsov is none of the European Court’s businessRussian could face terrorism charges for defending Ukrainian political prisoner Oleg SentsovRussia refuses to allow Ukrainian political prisoner Kolchenko to complete his studiesUkrainian political prisoners in Russia & occupied Crimea jailed for much longer than murderers
• Topics / News from the CIS countries

One of Russia’s Ukrainian hostages to be freed 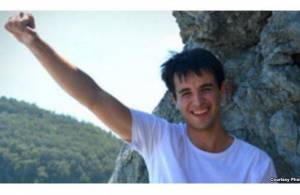 Lviv Maidan activist Yury Yatsenko is to be released from Russian custody on May 9, after his lawyer dazzlingly demonstrated the political motivation behind an absurdly harsh sentence imposed essentially because Yatsenko is Ukrainian.

As reported here, the young law student and his friend, Bohdan Yarychevsky were originally stopped to check their papers on May 6, 2014 in the Kursk oblast.  The police got excited when they saw that the two were from Lviv which one of the officers named a ‘fascist city’, and called in the FSB [Russia’s Security Service].

On May 8 a court found them guilty of an administrative offence because they’d ticked the box ‘private purpose’ on the border entry form and not ‘tourism’.  This appears to have been a pretext only and instead of being deported immediately  they were held in custody for three months, without access to a lawyer or the Ukrainian consul, and without being able to contact their families.

The FSB used this time, and the young men’s isolation, to try to beat ‘confessions’ out of them about supposed plans for some kind of ‘sabotage’ in Russia.  They wanted them to claim that they had been sent by the SBU [Ukraine’s Security Service] or by Right Sector, the national organization whose influence Russia has consistently exaggerated and demonized. The FSB also demanded that they publicly state that a military junta had taken over in Ukraine and to ask for political asylum.

After Yatsenko was taken to a forest and subjected to torture, both men resorted to self-mutilation as their only way of getting to hospital and having a chance to contact their families.

Yarychevsky was finally deported in August, but Yatsenko was instead charged with possessing (and initially smuggling) 40 grams of black hunting powder, allegedly as an explosive with which the young student was planning an act of sabotage.

Yatsenko asserts that the powder was planted on him, but even had it been his, it was a tiny amount and not in itself illegal.  Even the explosives expert brought in confirmed that the substance could only be used as an explosive if certain other elements, including a detonator, were involved.

This did not stop the first instance judge from sentencing Yatsenko to 2 years imprisonment.

The appeal hearing began inauspiciously, but ended well, in large measure thanks to the work of Yatsenko’s lawyer Pyotr Zaikin who gave Maria Tomak from the Centre for Civil Liberties a brief run-down.

At the hearing on April 27 Zaikin spoke of the fact that the 2-year sentence was of unprecedented severity under Article 222 § 1 of the Criminal Code.  He noted that court practice showed that the sentence would have been milder had his client been a Russian national. He therefore had to assume that the sentence in Yatsenko’s case was politically motivated.   The judge at that point interrupted him and announced that he considered Zaikin’s address to have ended.

“I was forced to indicate to the judge that he had infringed my client’s right to defence and that this could mean that the judge had an interest in a particular result.  I therefore asked for the judge’s withdrawal. The judge, however, claiming that I didn’t have the right to do that couldn’t think of anything better than to say that this (the application for his withdrawal) should not be noted in the court minutes. Obviously failure to keep a full record of the hearing is also a violation, which I immediately stated. Ultimately the presiding judge, knocked off keel, had to adjourn the hearing for two days.”

At the hearing on April 29, Zaikin focused on the Supreme Court’s practice in analogous cases, with this reiterated also in Yatsenko’s final words.

After a mere 10 minutes spent in the consulting chamber, the judge announced that he was reducing the sentence by more than a year, with this effectively equalling the time spent in detention.  Zaikin says that he saw relief on the judge’s face and he is convinced that the ruling had not been prepared in advance.  The judge, he says, was well aware of the likely consequences and questions he’d have to face if he simply revoked the sentence, indicating that Yatsenko had been held for almost a year for nothing.  His ruling demonstrated that he had not lost his conscience, but still lacked courage.

Zaikin is adamant that they should not stop at the reduced sentence, but seek the complete revoking of the law.

The first priority, however, is surely to get Yury Yatsenko safely out of Russia.  There is a potential hiccup – or worse – here.  Yatsenko is supposed to be released from the SIZO or remand prison during the night from May 8-9, however there is also another court ruling from last year obliging court bailiffs to take him from the special unit he should be in, deliver him to the border and hand him over to the Ukrainian border guards.  All of this is supposed to take place on May 9 (Victory Day), a major holiday. Zaikin notes also that earlier the FSB had taken Yatsenko to the border a number of times, yet did not release him.  Zaikin is therefore prepared for new provocation or tricks, however does say that the FSB in Belgorod where the appeal hearing was taking place gave off a better impression and did not falsify the case like their counterparts in the Kursk region.

Yury Yatsenko and his friend were detained slightly before the arrests of four opponents of Russia’s annexation of Crimea, including film director Oleg Sentsov and civic activist Oleksandr Kolchenko.  It is worth noting that the Kursk police were aware of some supposed ‘diversionary plot’ back on May 6-7, although the first arrest in Crimea was two days after Yatsenko and Yarychevsky were detained.  The latter’s account of their interrogations and the treatment received is very similar to that of Sentsov and Kolchenko who both assert they were tortured and blackmailed in an effort to get ‘confessions’ and testimony against EuroMaidan and the government in Kyiv.

This ruling with respect to Yury Yatsenko is excellent news against a background of stubborn lawlessness.  The list of other prisoners held by Russia on fabricated charges is long, with the Kremlin ignoring calls from the international community and flouting the Minsk Protocol it signed in refusing to release Nadiya Savchenko, Sentsov, Kolchenko and a number of others.