Analysis of the Law on Prohibiting Communist SymbolsParliament ignores public opinion on Ukraine’s history. Will the President?Politicizing History: Parliament adopts Dangerously Divisive LawsPhantoms are phantomsFighting phantomsNo dossier on ShukhevychWorking to reveal the truth about OUN and UPAMore information from SBU archivesSBU is planning to tell the truth about Soviet efforts at discrediting the UPAPresident called on to help lift the seal on KGB archivesOn the 65th anniversary of UPA the arguments still rageFirst joint memorial unveiled for Soviet soldiers and fighters of OUN-UPAPresident signs dangerously flawed ‘decommunization’ lawsCommunist party ban will be slammed in Strasbourg, along with original decommunization lawUkraine’s Communist Party OutlawedUkraine’s Decommunisation Law hammered by Venice Commission for violating democratic standards5 years for a red flag? Controversial decommunization law used against Ukrainian veterans’Decommunization’ in Ukraine Carried Out Using Communist MethodsUkrainian student sentenced for ‘propaganda of communism’ on FacebookDivisive & Ill-Timed Renaming of Kyiv Street after Controversial Nationalist Leader
• Topics / Freedom of expression 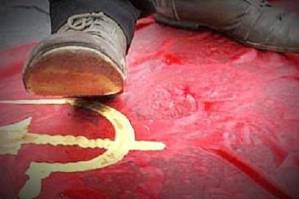 If President Poroshenko signs into force the “decommunization” package of laws adopted by Parliament on April 9, 2015, European Court of Human Rights judgements against Ukraine will be only a matter of time.  The message given to a significant percentage of Ukrainians, especially in Donbas, will be that their views are not respected and must be changed.  At a time when Russia is waging undeclared war with Ukraine and seeking any opportunity to divide Ukrainians, the ramifications of sending such a message for the very security of the country are enormous.

In his article "Decommunization" and Academic Discussion, Volodymyr Viatrovych is disingenuous in reporting that “similar laws were adopted by other Eastern European countries in order to overcome the totalitarian legacy of Communism." Similar provisions to those passed on April 9 were adopted, and then found to be unconstitutional or in breach of the European Convention.  In his analysis of the Law on prohibiting communist and Nazi symbols, Volodymyr Yavorsky mentions several countries who were forced by their own Constitutional Courts or the European Court of Human Rights (ECHR) to abandon analogous legislative moves.

These include Hungary, which in 2000 had imposed criminal liability (punishable by fines) for circulating or publicly using or displaying specific Nazi or communist symbols.  The Constitutional Court finally declared such provisions unconstitutional after two ECHR judgments.  In the first of these - Vajnai v. Hungary – the Court found that fining a demonstrator for wearing a red star was in breach of his right to freedom of expression. The Court acknowledged the degree to which the red star had been discredited by the mass violations of human rights under communism but disputed that it could be understood as solely representing communist totalitarian rule.  It said that the government had not demonstrated “that wearing the red star exclusively means an identification with totalitarian ideas”.  The Court stressed that “the potential propagation of that ideology, obnoxious as it may be, cannot be the sole reason to limit it by way of a criminal sanction.”

The above is not quite a preview of the likely judgements passed against Ukraine should the law prohibiting symbols come into force, since the Court in Strasbourg would also be likely to find Ukraine guilty of imposing disproportionate sanctions.  The law awaiting the President’s signature goes considerably further than Hungary’s Parliament and imposes hefty terms of imprisonment (well-hidden in a long list of proposed amendments to criminal law that is already in effect; please see below for more on this).

It is disturbing that Viatrovych should choose to cite other countries’ experience as grounds for passing the laws without mentioning the lessons forced on those countries.  It will be galling if the President sees fit to ignore the ECHR and the Council of Europe’s Venice Commission, which has also expressed similar reservations over attempts by Moldova to bring in such laws.

Before considering specific reservations about the laws and Viatrovych’s arguments, I would dwell for one moment on the question of rights.  In his blog on “Krytyka, ” Askold Lozynskyj drew issue with a previous article of mine and falsely claimed that he had been given no evidence for my statements.  He further suggests that such a text is inappropriate on the website of the Kharkiv Human Rights Protection Group (KHPG) and claims it to be “well beyond any mandate of protecting human rights.”

Lozynskyj is mistaken.  These laws have a manifest and highly negative impact on human rights, which is one of the main reasons why it is imperative that President Poroshenko uses his power of veto and asks parliament to introduce serious amendments.

In the following, I focus on freedom of expression. However, in the above-mentioned analysis, Yavorsky points also to threats imposed on freedom of association, peaceful assembly, and electoral rights.

Viatrovych is right, of course, that the Law "On the Legal Status and Honouring of Fighters for Ukraine’s Independence in the Twentieth Century" does not directly mention criminal liability for “not recognizing the legitimacy of “the struggle for the independence of Ukraine in the 20th century." It does, however, state that

Ukrainian nationals, foreigners and stateless persons who publicly express disrespect for those stipulated in Article 1 of this law … bear liability in accordance with current Ukrainian legislation. 2.  Public denial of the legitimacy of the struggle for Ukraine’s independence in the XX century is deemed desecration of the memory of fighters for Ukraine’s independence in the XX century, denigration of the dignity of the Ukrainian people and is unlawful.

How this law would be applied is not immediately clear, but the wording above would doubtless make at least Ukrainian scholars wary of making comments that could be deemed "denigration" or "disrespect."  One does not need to hearken back to Soviet times to understand the deterrent impact of such unclear legal provisions on academic study and press freedom.

What constitutes "disrespect" or "denigration" and who is to decide this?  Are we to seriously believe that all research, for example, into the 1943 Volyn Massacre will remain unimpeded by such prohibitions?  What if we strongly deny that the members of the Ukrainian Insurgent Army (UPA), implicated in such ethnic cleansing, were serving the cause of Ukraine’s independence?  The same questions could be asked about all sorts of details from WWII, as well as earlier periods.

There are similar consequences for academic freedom and generally freedom of speech in the Law “On Condemning the Communist and National Socialist (Nazi) Totalitarian Regimes and Prohibiting Propaganda of their Symbols.”

Here there are very real sentences, which Viatrovych does not mention.  The formidable list of proposed amendments to legislation listed at the end of the bill includes sentences of either restriction of liberty for up to five years or imprisonment for the same period for the preparation, circulation, and public use of communist or Nazi symbols.  A repeated "offence” would carry a sentence of 5 – 10 years imprisonment.

Yes, the draft law stipulates that bans do not apply to academic and educational material but only on condition that this does not lead to denial of the criminal nature of the Communist totalitarian regime of 1917-1991 in Ukraine.

The potential sentence is draconian and how exactly one could prove that a specific academic work did not result in denial of ‘the criminal nature’ of this regime is anybody’s guess.  As mentioned, in an analogous case, Hungary was found in breach of Article 10 of the European Convention (freedom of expression) for having imposed a fine.

There are also other concerns.  By no means all Ukrainians view all aspects of the regime from 1917-1991 as criminal.

A recent survey found that the views which politicians are trying to legislate via these “decommunization” laws do not correspond to those held by a large number of Ukrainians, especially in the South and East of Ukraine.  The survey carried out by the Democratic Initiatives Foundation and Ukrainian Sociology Service sought to establish what unites and divides Ukrainians. There were, for example, four oblasts [regions] (Donetsk, Kharkiv and Dnipropetrovsk and Zaporizhya) where a majority viewed the collapse of the Soviet Union negatively.  There were major differences also in attitude to UPA and the Organization of Ukrainian Nationalists (OUN) with a clear geographical divide (negative in the Donetsk, Kharkiv, Dnipropetrovsk, Zaporizhya, Mykolaiv, Odessa, and Kherson oblasts).

Volodymyr Viatrovych is aware of these divides.  He states that it is “on this island of ‘Sovietness, ’ which for historic reasons remained strongest in the Donbas and in Crimea, that Putin’s aggression against Ukraine is taking place.”

Unfortunately, he refers only to those “bearers of Soviet values” whom, he asserts, are the source of manpower for the Kremlin-backed militants in Donbas.  He makes no mention of the large number of Ukrainians in Donbas, and in the South-East in general, who have been found by numerous surveys over the last year to identify with Ukraine.  Their views have been entirely ignored by parliamentarians who believe that they can impose “correct” attitudes regarding Ukraine’s history via legislation.  It is certainly possible to force most people with dissident views to remain silent.  Ukraine has bitter experience of this from both Soviet and post-Soviet times.

Similar trends were seen under the presidency of Viktor Yushchenko.  As promises of urgently needed reforms given during the so-called “Orange Revolution” in 2004 proved empty, there was increasing focus on historical issues.  If this was justified in raising awareness of Holodomor (the manmade Famine of 1932/33) such actions as declaring nationalist leaders Stepan Bandera and Roman Shukhevych “heroes of Ukraine” were highly divisive. It is no accident that the same geographical divides and polarization mentioned above was found in respondents’ attitude to the “Orange Revolution.”

Yes, Ukraine needs to shed its Soviet past and translate the victory of Maidan into real reform and European integration.  This must be achieved through dialogue and respect for those Ukrainians who currently view the government in Kyiv with suspicion and distrust.  And through laws which meet European human rights standards and the requirements of rule of law.

The so-called “decommunization” laws in their present form hearken back to Soviet practice of imposing certain ideology as correct.  This is a retrograde move, which will certainly result in Ukraine’s being found in violation of the European Convention on Human Rights.  Volodymyr Viatrovych is right on one thing: the issue of decommunization is indeed related to security policy.  At a time when Ukraine is under attack, unity is vital and these laws are dangerously divisive.