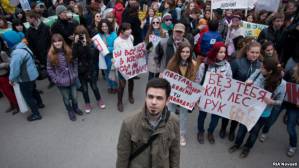 Artyom Loskutov, Novosibirsk performance artist, has been sentenced to 10 days imprisonment as well as a fine of 5 thousand roubles over two ‘unauthorized’ monstrations, or events with absurd slogans.  The same artist’s attempts last September to hold a march in support of Siberian federalization under the title “We’ve had enough of feeding Moscow” resulted in both the Russian prosecutor and effective censor – Roskomnadzor – going into serious overdrive.  Over the following months Roskomnadzor threatened to block even Ukrainian sites, as well as the Russian Service of the BBC, over entirely innocuous reports about the planned, and then banned, event.

RFEL’s Tom Balmforth has given the following description of Loskutov’s new artistic form of protest, which may – or may not – explain why the Russian authorities react as they do.

Every year on May 1, local activists swarm through the Siberian city of Novosibirsk with accoutrements like these in a surreal parody of protest – a "monstration" to use their term, the brainchild of local performance artist Artyom Loskutov.

Founded in 2004, the performance art movement held a rally for a 12th year running on May 1 despite an argument with City Hall that threatened to pull the plug on the parade this time round.

The organizers had been unable to agree on the march’s route with authorities.

And at an April 29 press conference, Loskutov said his army of "monstrators" would compromise and join a larger May Day parade scheduled in the center of town.

Nonetheless, local media estimated that more than 2, 000 activists reportedly turned up to join the bigger May Day parade on May 1 only to find police had cordoned off their gathering point and told them they had not been authorized to take part.

Instead, the activists marched in the opposite direction. Some were later due to gather outside City Hall to ask why Novosibirsk’s mayor had not attended the parade despite promising to do so in the run-up.

Local media reported that Loskutov was subsequently arrested by police, while he himself wrote on Twitter: "I’m being arrested by Center E [police tasked with fighting extremism]."

At the press conference ahead of the rally, Loskutov said he was surprised at the enduring popularity of his rally that last year brought together an estimated 5, 000 monstrators, but that he would keep organizing it as long as its popularity continues.

If anything, there have been signs the rally is catching on.

A local "Monstration" in Yaroslavl was set to see activist artists marching from the intersection of Soviet Street and Lenin Prospekt after the local authorities gave organizers the go-ahead.

Another Monstration is expected on May 2 in Montenegro.

Loskutov describes the absurd slogans of the movement as a reflection of the absurdity he sees around him, an artistic idea he said was captured by fellow monstrator Ivan Dyrkin, who held up a mirror as a placard at the inaugural 2004 demonstration.

Slogans have ranged from the comic -- "I demand understandable slogans!" and "Forward to a dark past" -- to the simply gibberish -- "Chivo chivo?"

"I can’t get away from the sense that I’m living in some kind of absurd, " Loskutov told RFE/RL’s Russian Service in an interview on April 26 ahead of the parade. "Reading the news, I am always surprised by the direction we are going. That’s why the ’Monstration’ is the more honest and adequate reaction to our lives."

Despite the overwhelming absurdism of the initial movement, some of the banners have had a more overtly political flavor. Last May’s monstrationmocked Russia’s annexation of the Ukrainian peninsula of Crimea, using as their main slogan a parody of "Krym Nash" (Crimea Is Ours), the rallying call for those who reveled in the annexation. Instead, the monstrators wrote "Ad Nash" (Hell Is Ours).

Loskutov defended the drift into the more politicized realm as a reflection of the Russian reality.

"Politics didn’t used to thrust itself into our lives as aggressively as it does now. Propaganda didn’t get into our heads the way it seeps in now from the television, " he said.

In 2010, the Novosibirsk-born performance artist won an "Innovation" state award for contemporary art.

But his antics have on occasion irked the authorities and, in particular, Orthodox activists.

In 2012, he was fined for supporting the activists of feminist rock group Pussy Riot -- then in jail for a rebellious performance at a Moscow cathedral -- by selling special T-shirts with their image and displaying icon-like posters of the activists in the Siberian city.