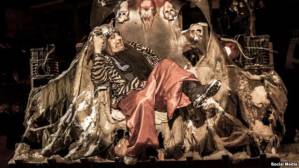 Led by nationalist biker Aleksandr Zaldostanov, a friend of Putin’s known as “The Surgeon, ” the Night Wolves have used these funds to stage over-the-top patriotic events like their pyrotechnic-filled take on the Ukraine conflict last year in front of a crowd of some 100, 000 in the Crimean port city of Sevastopol.

But they’ve also drawn from the public till for a goal that some might consider of questionable propriety: terrifying children.

According to Navalny’s investigation, the Night Wolves received 12 million rubles ($237, 000) over the past two years to stage bombastic children’s New Year’s shows aimed at frightening kids about the menace of a U.S.-led global conspiracy to bring Russia to its knees.

"When the kids come to us, we don’t cut costs on special effects or efforts to convey to the children a feeling of true drive and danger, " Zaldostanov said of the group’s annual New Year’s show in an interview earlier this year with the state-run RIA Novosti news agency. "They should see that evil truly is scary."

Known in Russian as “novogodniye yolki, ” these children’s New Year’s parties are typically a highlight of the holiday season for wide-eyed children across Russia. They feature songs, fairy tales, the ceremonial lighting of the tree, and appearances by Ded Moroz, or Grandfather Frost,  and the snow maiden Snegurochka, who hands out his gifts.

The annual Night Wolves celebration, however, takes some extremely dark turns. In the 2013 show, Snegurochka is kidnapped as part of a plan by evil conspirators from “across the ocean” that includes destroying both Russia and New Year’s celebrations.

One of the conspirators is a woman representing the Statue of Liberty who at one point appears in tight-fitting studded biker leather and wielding a whip as the song “Thunderstruck” by legendary Australian hard rock band AC/DC plays.

The show brims with ominous red lighting, villains’ cackles, and pulsating music. A video of the performance occasionally reveals the alarmed expressions on the faces -- though no visible tears -- of the children in the audience:

Ultimately, however, the enemies of Russia are defeated, and Zaldostanov and his colleagues emerge to do some bike tricks, lightening the mood in the venue.

The Night Wolves, who are currently riding across Europe to commemorate the 70th anniversary of the Soviet and Allied victory over Nazi Germany, received 3.2 million rubles in state grants for the 2013 New Year’s children show, according to Navalny’s investigation.

That sum was bumped up to 9 million rubles for the 2014 show, according to Navalny’s report, which gave the following description of that event:

“Evil forces are trying to sell out the motherland, symbolized by a giant key, in exchange for ‘foreign grants.’ The reanimated Statue of Liberty in a sheriff’s car brings suitcases with grants. Then she climbs up on some kind of platform and throws cash and entire boxes of ‘grants.’ People in traditional Russian garb…catch the boxes.”

During a July 2012 meeting with Putin in Sevastopol, Zaldostanov touched on the possible value of the Night Wolves’ annual holiday event in promoting vigilance among Russia’s youth,  according to a report by the Russian daily Moskovsky Komsomolets.

“If I had seen that kind of [New Year’s] show when I was their age, ” Zaldostanov was quoted as saying, “I would have crapped my pants.”