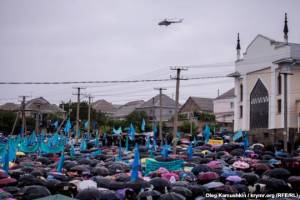 Military helicopter over the remembrance gathering on the outskirts of Bakhchysarai, May 18, 2014

Just hours after threats from Crimea’s ‘prosecutor’ that Ukrainian ‘nationalists and radicals’ could expect to be jailed in Russian-occupied Crimea, claims have been made of ‘mass provocation’ planned around the anniversary of the 1944 Deportation of the Crimean Tatar People on May 18.  These are supposedly being planned by Ukrainian politicians and the leaders of the Mejlis, or Crimean Tatar representative assembly, however the arrest and detention of a “group of Ukrainian nationalists” is also reported.  In the meantime, Gennady Bakharev, head of the Simferopol city administration has stated that the traditional remembrance gathering in the centre is once again to be prohibited.

Remembrance gatherings were organized by the Mejlis and held on the central square in Simferopol from when Crimean Tatars were able to return from exile following Ukraine’s independence.  This changed with Russia’s annexation.  Following the total ban on the meeting in Simferopol last year and initial attempt to prohibit any public remembrance gathering marking the seventieth anniversary of the Deportation, a ban this year was, unfortunately, not unexpected.

There have, however, been ominous statements from Ruslan Balbek, occupation regime ‘deputy prime minister’ parroted by ‘prosecutor’ Natalya Poklonskaya, these coinciding with an escalation in repressive measures against both Crimean Tatars and Ukrainian activists.

Balbek claimed that the law enforcement bodies are receiving information about “mass provocations being planned” in Crimea.  RIA Novosti reports that “according to him, those behind them are Ukrainian politicians and leaders of the Mejlis of the Crimean Tatars Mustafa Dzhemiliev and Refat Chubarov who every year used the tragic date - the Day of the Deportation – to destabilize interethnic relations, creating artificial confrontation on ethnic and religious grounds.

We are getting reliable information about provocation being planned throughout Crimea.  The main aim is the destabilization of the situation in the republic on the eve of Remembrance Day on May 18. The provocateurs have been given the task of sowing interethnic enmity and distrust among Crimeans”.

Balbek also asserted that law enforcement officers had already detained “one group of Ukrainian nationalists who had tried to disrupt the Crimean Tatar national festival Hydyrlez, and on the eve of it organized arson attacks on mosques and the theft of believers’ donations.”

He could not exclude the possibility, he said, that “the provocateurs may resort to the most sacrilegious methods, from arson attacks on mosques and desecration of them with Nazi symbols to the devastation of Crimean Tatar cemeteries ».

Balbek clearly expected scepticism and added that the information about the alleged provocation had come from “former supporters of the Mejlis leaders who succumbed to their influence and left Crimea after its reunification with Russia, however today, having understood the error of their decision, are returning to the peninsula.”

The antagonism shown by Russia and its puppet regime in Crimea towards the Mejlis emerged only after initial attempts to win Mejlis support for the supposed ‘referendum’ on March 16 failed.  The Mejlis, representing the overwhelming majority of Crimean Tatars, opposed annexation and viewed the assurances given by the Kremlin and its local proxies with scepticism.

The distrust very soon proved to be warranted.  On April 22 Mustafa Dzhemiliev, veteran Crimean Tatar leader and Ukrainian MP, was banned from his homeland, 70 years after being deported as a small baby.  Less than a month later, the occupation regime tried to ban all remembrance gatherings, and when they couldn’t, used heavy-handed methods to keep people out of the centre of Simferopol and resorted to flying military helicopters over prayer gatherings on the outskirts of both Simferopol and Bakhchysarai. Since then the offensive against Crimean Tatars in general, and the Mejlis in particular has gained momentum.  At present the Head of the Mejlis, Refat Chubarov has also been banned from his homeland while his deputy, Akhtem Chiygoz has been in detention since Jan 29 this year and is now on hunger strike.  Armed searches, interrogations are frequent and there remains no news of the young Crimean Tatar men who were either abducted or who disappeared without trace.

The regime is very overtly resorting to methods of divide and rule, as well as Soviet-style pretence.  It effectively hijacked the Spring festival Hydyrlez on May 3, using a mixture of coercion, bribes, encouragement of those Crimean Tatars in opposition to the Mejlis and lies about the numbers who attended. It has ‘nationalized’ property belonging to the Crimea Foundation, which is linked with the Mejlis, and has ostentatiously handed it to the Spiritual Directorate of Muslims, clearly hoping to sow dissent.  There have been repeated attempts to insert ‘malleable’ Crimean Tatars in leading positions in the Mejlis and Qurultay or Crimean Tatar congress.

The occupation regime has now reacted to the close support between ethnic Ukrainian and Crimean Tatar groups both in Crimea and in exile by coming up with ‘Ukrainian nationalists’ supposedly running around desecrating mosques and cemeteries.  To stretch credibility still further, these nationalists are presumably conspiring, the claim goes, with the exiled leaders of the Mejlis, including the world-renowned Nobel Peace Prize nominee Mustafa Dzhemiliev.

Over the last year, the occupation regime has become brazen in its lies and in its methods, with too many people already in detention facing long sentences on manifestly absurd charges.  It is for this reason that the warnings of ‘provocations’ must be taken seriously.