One of Russia’s Ukrainian hostages to be freedBeing Ukrainian is not a crime: Free Yury Yatsenko!Guilty of being Ukrainian: Russian court sentences Maidan activist to 2 yearsRussia’s Geopolitical PrisonersPunitive psychiatry used against Crimean ‘terrorist plot’ suspect?Crimean ‘terrorist plot’ suspect in Russian psychiatric wardRussia’s FSB launches first Crimean show trial’Terrorism’ trials for Crimean film director and other opponents of annexationUkrainian film producer facing Russian ‘terrorism’ chargesRussian FSB detains Ukrainian film producer in SimferopolFormer Kremlin hostages put release of all Ukrainian political prisoners on the agenda Ukrainian justice based on false police reports: From Maidan to former Kremlin political prisonerEx-Kremlin hostage Sentsov calls out Zelensky over flagrant violations in Sheremet caseSentsov: Whenever you think of friendship with Putin and Russia, remember the 13,000 Ukrainians killed and hundreds imprisonedHow can Russia deny responsibility for MH17 when it gave up Sentsov, others to get key witness out of Ukraine?Home at last! 24 POWs and 11 political prisoners, including Oleg Sentsov arrive in KyivRussia claims torture used to imprison Sentsov is none of the European Court’s businessRussian could face terrorism charges for defending Ukrainian political prisoner Oleg SentsovRussia refuses to allow Ukrainian political prisoner Kolchenko to complete his studiesUkrainian political prisoners in Russia & occupied Crimea jailed for much longer than murderers
• Topics / News from the CIS countries

"One message to FSB: You didn’t break me and Ukraine cannot be broken" 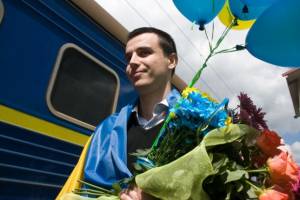 Lviv student Yury Yatsenko was welcomed home in his native Lviv on Friday, May 8, a year after being detained in Russia, tortured and then convicted on fabricated charges.  He spoke of the direct threats he and his friend had received if they didn’t ‘cooperate’ with Russia’s FSB [Security Service].

As reported, Yury Yatsenko and his friend Bohdan Yarychevsky were stopped by police in the Kursk oblast on May 5, 2014.  It should have been a simple check of the young men’s documents, however the police were clearly heavily under the influence of the propaganda exuding from State-controlled Russian television.  When they discovered that the men were not only from Ukraine, incriminating as that was, but from Lviv, they rang the FSB who sent counter-intelligence officers.

The two Ukrainians were told quite directly that either they “cooperate” or face prosecution.  The ‘cooperation’ demanded was public statements aimed at discrediting Ukraine.  Various options were proposed, such as claiming that they were members of the ultra-nationalist Right Sector, or that Ukraine’s SBU had sent them to carry out sabotage.

“When we refused, we were beaten for three days, not given any food.  They didn’t let us sleep, and interrogated us all day. This later continued with increasing intensity, ”   he explained.

Yatsenko expressed gratitude for people’s support without which he could not have been released.  He spoke of his moral duty now to tell all the details of the treatment he received, the torture and pressure, both physical and psychological.

He also mentioned his suspicion that the FSB had deliberately released one of the two in order to make people think that Yarychevsky, who was deported in August, had cooperated.  Yatsenko categorically denied any such suggestions.

One poignant moment was when Yury was finally able to hug his father who had spent six months near the SIZO where his son was held.  Serhiy Yatsenko was not even allowed to get near his son during the court hearings or in SIZO.

Although the FSB were called in immediately, Yatsenko and Yarychevsky were initially only found guilty of an administrative offence (ticking the wrong box on the form when entering Russia) and placed in a deportation centre.

They were not allowed to contact their families, and had no access to either lawyers or the Ukrainian consulate.  They were totally under the control of the FSB who used both the time and the young men’s isolation to try to get them to make ‘confessions’ discrediting Ukraine.   Yarychevsky reported on his release that the FSB had also demanded that they publicly state that a military junta had taken over in Ukraine and ask for political asylum.

After Yatsenko was taken to a forest and subjected to torture, both men resorted to self-mutilation as their only way of getting to hospital and having a chance to contact their families.

Yarychevsky was finally deported in August, but Yatsenko was instead charged with possessing (and initially smuggling) 40 grams of black hunting powder, allegedly as an explosive with which the young student was planning an act of sabotage.

The substance, even had it not been planted (and it was not ‘found’ until months after the men were detained), was a small amount and not in itself illegal.  Even the explosives expert brought in confirmed that the substance could only be used as an explosive if certain other elements, including a detonator, were involved.

The first court, nonetheless, sentenced Yatsenko to 2 years imprisonment.  This sentence was reduced  to the period that Yatsenko had already spent imprisoned thanks to the dazzling defence presented by his lawyer, Pyotr Zaikin (more details here).

Yury Yatsenko is free, however many other Ukrainians remain imprisoned in Russia on absurd charges.

They all need maximum publicity.

Nadiya Savchenko who will be turning 34 in Russian detention on May 11 (please use the address here and send her birthday greetings!)

Yury Soloshenko who turned 73 on May 6.