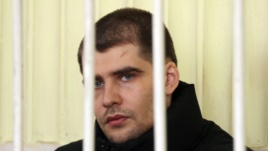 The latest court hearing in the trial of young Maidan activist Oleksandr Kostenko was full of features as absurd as the charges against him, with the court accepting the ‘testimony’ of an anonymous witness for the prosecution and the inclusion in the file material of a totally unsubstantiated claim made by a blogger.

Kostenko is charged with having slightly injured a Berkut officer on Feb 18, 2014 during the EuroMaidan protests in Kyiv.  The charges relate to something over which occupied Crimea can have no jurisdiction, and even if it could, there is still no proof that the alleged act took place.

At the hearing on May 8, Kostenko refused to give testimony, invoking the relevant article of the Russian criminal procedure code.  He said that his refusal was because everything he says is distorted to be used against him.

His lawyer, Dmitry Sotnikov demanded that blogger Anatoly Shariy be summoned to court since the prosecution was insisting on having a video clip produced by the blogger added to the case.  Shariy claims to have a recording of a conversation between Kostenko and a former MP from the far-right VO Svoboda party, during which Kostenko is alleged to have told the other person that “one Berkut officer has already broken”, and they “need another half hour working on “a second officer.  In the background, you can hear groans and the apparent sounds of blows.

Despite the obviously dubious nature of this material and its lack of any real relation to the charges against Kostenko, the judge refused to allow Sotnikov’s application.  The reason given was that Shariy’s whereabouts are not known.

This was not the reason for the prosecution witness’ anonymity since the court heard this individual, known only as Stas, via Skype.

Sotnikov explains that witnesses for the defence are not prepared to come to Crimea, fearing, and not without cause, that they will be subjected to the same treatment as Kostenko.

Both Sotnikov and Kostenko’s mother, who is acting as his defender in the case (a role enabling her to visit her son) report Kostenko’s complaint that he has again been subjected to torture, this time aimed at forcing him to give up his lawyer.  At the previous court hearing a document of highly dubious authenticity was presented, which claimed that Kostenko no longer wanted Sotnikov to defend him.

The charges in this case are not serious enough, even according to Russian legislation, to warrant Kostenko’s detention yet he has been in custody now since Feb 5, 2015.  The aim in his case, as unfortunately in others both in Crimea under Russian occupation and against Ukrainians in Russia, is almost certainly to try to extract the necessary ‘confessions’ and testimony through physical and psychological pressure.  The same aim is doubtless behind efforts to remove a lawyer who really is defending his client and bluntly calls the prosecution politically motivated and without any evidence whatsoever.  Sotnikov has also highlighted the quite staggering infringements in this case, including the fact that no protocol of the previous hearing on April 21 appears to have been kept at all.

As reported here, Oleksandr Kostenko was arrested in Simferopol on Feb 5.  This date is confirmed by his friends, yet the criminal proceedings against him were only initiated a day later.   Put more bluntly, they came up with criminal charges after coming up with a Maidan activist.

He is charged with an alleged offence almost exactly a year earlier, under Article 115 § 2.b  of the Russian Criminal Code (deliberately causing mild damage to health for motives of political, ideological, racial, ethnic or religious hatred or enmity, or for the same motives in relation to a social group). The investigators also threw in Article 222 § 1 (unlawfully obtaining, keeping or carrying the main parts of a firearm”) and claim that they found a rifle barrel when searching his home.  Sotnikov points to irregularities here as well, with none of the safeguards against evidence being planted having been applied.

As mentioned, both charges are too minor to warrant a detention order, yet the investigator claimed and the judge accepted that Kostenko needed to be held in custody because he had supposedly evaded the investigators, had not notified of the crime allegedly committed and because he is a Ukrainian citizen.

The investigators claim that in Jan 2014 Kostenko joined the EuroMaidan protest in Kyiv “in order to show armed resistance to law enforcement officers”.  On Feb 18, so the investigators’ version goes, “out of a feeling of ideological hatred and enmity to law enforcement officers” he deliberately aimed a cobble stone at V.V. Poliyenko, an officer of the Crimean Berkut special force unit.  This supposedly resulted in Poliyenko receiving an injury “in the form of a large haematoma on the left shoulder”.

Even could an alleged act by one Ukrainian national against another in Kyiv be tried under Russian law in Crimea, it would still be impossible to prove that the supposed offence actually took place. More details here.

This trial is of unprecedented cynicism and of critical importance, not only for its key victim – Oleksandr Kostenko.  The occupation regime is sending a very clear message through its lawlessness as well as that of the so-called ‘Feb 26, 2014’ case against Crimean Tatars, that the law enforcement bodies and courts can now be viewed as weapons of persecution and intimidation.