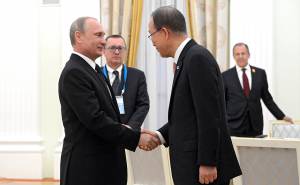 After attending the Victory Day parade which virtually all leaders of democratic countries stayed away from, UN Secretary-General Ban Ki-moon reportedly praised Vladimir Putin and said that he deserved the pride of his people”.  That, at least, is what the Russian President’s website claims, with the Secretary-General’s words given in both Russian and English, and eagerly quoted by the Russian media.

It is difficult to believe that this could be a mistake, yet inconceivable that Ban Ki-moon should have “congratulated” Putin for his “leadership and vision”.   There were very good reasons for the decision taken by most world leaders to not attend the parade, namely Russia’s annexation of Crimea and ongoing aggression against Ukraine.   The BBC quotes one European diplomat as saying “it wouldn’t be appropriate for Western leaders to stand on a military podium with Mr Putin after Russia’s annexation of Crimea”.

The United Nations itself on May 27, 2014, passed a resolution entitled “Territorial Integrity of Ukraine” which specifically called on countries, international organizations and specialized agencies to not recognize any change in the status of Crimea or the Black Sea port city of Sevastopol, and to refrain from actions or dealings that might be interpreted as such.

The Secretary-General was in Ukraine on May 8, and according to his press service “reaffirmed his support for a peaceful resolution, in a manner upholding Ukraine’s sovereignty, territorial integrity and independence”.

Support is hardly demonstrated by open approval of the Russian leadership which is directly responsible for violation of Ukraine’s territorial integrity and for jeopardizing peace and security in Europe.  Russian direct involvement in Ukraine has long been acknowledged, and is on the increase.

According to the President’s website, the UN Secretary-General made his initial thanks for his welcome in Russian and then spoke in English.  His comments included the following:

“70 years after, today I was able to witness myself the proud faces and the strong commitment for peace by not only soldiers who participated in it, but by people who were watching and were a part of this event. Congratulations for your leadership and vision.

After this parade I saw hundreds of thousands people still in the street. I thought they were demonstrating against government, but they were supporting your leadership, they were very proud citizens. And they were waving hands to the United Nations, so I was also honoured. I think you deserve all this pride of your people.”

South Korean Ban Ki-Moon did not meet with North Korean leader Kim Jong Un on Saturday, the latter having unexpectedly decided not to accept the invitation to attend the parade.  One wonders whether the UN Secretary-General would have drawn similar conclusions about overwhelming support for the North Korean dictator from similar waving crowds in the centre of Pyongyang.

There are undoubtedly specific rules of etiquette when thanking ones host for an invitation.  It would be difficult to believe, for example, that the UN Secretary-General could genuinely think for a second that he was viewing a protest against government when even single-person pickets against the Kremlin’s undeclared war in Ukraine regularly result in arrests, imprisonment on administrative charges and/or fines.

Flattering ones host is, however, much more than a diplomatic flourish when any words are likely to be widely reported by pro-Kremlin media as a statement of support for Kremlin policy.

The words as reported in both English and Russian on the President’s website give every reason to believe that this was intended.

If the words spoken by the Secretary-General of the United Nations have been misreported, as must be hoped, then clarification should be provided immediately.  If Ban Ki-Moon’s “participation in this parade as Secretary-General of the United Nations was intended to mean only that “we are working together for humanity and world peace and freedom”, the reported pronouncements about Vladimir Putin’s “leadership and vision” serve a different end altogether, one both inappropriate and destructive. 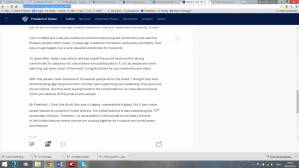 Screenshot of the address in English from the Russian President’s website  http://en.kremlin.ru/events/president/news/49445