One Birthday Wish on May 11: #FreeSavchenko 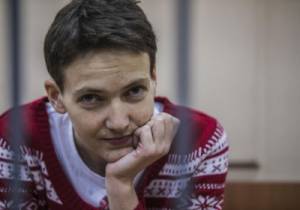 Nadiya Savchenko turns 34 on Monday, May 11, in Russian detention.  There is surely only one birthday wish for Nadiya:  her immediate release.  Please express it by joining the global action on her birthday, ensuring that all messages carry the simple demand:

You can also send her birthday greetings.  If at all possible, write in Russian.  If not, then English is the most likely to pass by the prison censors.

If defence lawyer Ilya Novikov is right that the authorities are trying to speed up the case in order to find some way to release Savchenko, then every bit of pressure, every clear indication that she is not forgotten, is vital.  Novikov is convinced that the acceleration of her case is because the investigators have been told to get it to court in June with a view to then amnestying or ‘pardoning’ the former military pilot who is now a Ukrainian MP and delegate to the Parliamentary Assembly of the Council of Europe.

On Nadiya’s birthday in such bleak circumstances, all moral support is important.   Nadiya spoke recently about her days spent in the Matrosskaya Tyshyna SIZO [remand prison].  She had no complaints about the staff who behave correctly, but, she says, she wakes in the morning thinking about what she can do to get through the day.  And, of course, she is under permanent surveillance.

No wonder that when asked what she dreams of, and what she’ll do first when she’s freed, she said:

“I’ll run away from people to the forest, spend several days there, get enough to eat, to drink, and then return” (and laughed).

Speaking on a Ukrainian talk show on ICTV on Friday, Novikov said that the investigators had noticeably sped up over the last month.  Russian politicians, he mentioned, while repeating the line used by Russian President Vladimir Putin from the outset that “the courts must decide”, are increasingly talking of working out whether she can then be amnestied.

He mentioned also that the investigators’ charges have now changed, with the claim that Savchenko had been involved in the deliberate murder of journalists carrying out their professional work now removed.  She is still accused of having climbed a telephone tower and sent information about the journalists’ whereabouts to Serhiy Melnychuk, Aidar Battalion Commander.  The investigators are claiming that she was able to provide exact coordinates, but have failed to explain the means by which she did so.

Nadiya Savchenko was captured by Kremlin-backed militants in Luhansk oblast [Ukraine] on June 17, and taken by force to Russia where a court on July 3 remanded her in custody.  The investigators accused her then of being implicated in the death of two Russian journalists whom Moscow has insisted from the outset, without providing any credible evidence, were killed deliberately, and not just caught in mortar fire.  The charges appear to be based solely on testimony from the militants and the court has ignored proof that Savchenko was already captured when the journalists died.

In October 2014 the IC first suggested that Savchenko could be charged with ‘illegally crossing the border’, but nothing was done until hours after a PACE resolution on Jan 28 called on the Russian authorities to release the Ukrainian PACE member “within 24 hours and to ensure her return to Ukraine or to hand her over to a third country”.

The final indictment acknowledges that Savchenko had been captured by militants but claims that they inexplicably released her on June 23.  Even more unfathomably, she is supposed to have headed not to Kyiv, but to the Russian border which she then “crossed illegally”.

All applications to the court for extension of her detention, psychiatric tests at the notorious Serbsky Institute, etc. have been allowed by all Russian courts, making the claims that it is the court that must decide a particular bitter travesty.