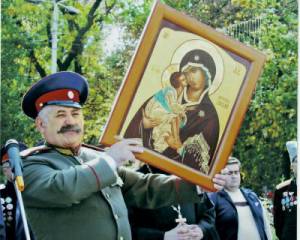 Nikolai Kozitsyn from the Most Glorious Legion of Don

A recent report highlights widespread and systematic persecution of all religious groups except believers linked to the  Orthodox Church of the Moscow Patriarchate in Donbas, and the role of Russia and its armed criminal ‘crusaders’ in mounting crimes against humanity in the region.

In parliament on May 8 three representatives of the Orthodox Church under the Moscow Patriarchate, including Primate Onufriy, remained seated when President Petro Poroshenko read out the names of 21 soldiers awarded the title of Hero of Ukraine, 10 posthumously.  The soldiers were being honoured for their role in the military action against Kremlin-backed militants in Donbas and all others present, including foreign guests, rose to their feet.

Bishop Clement later asserted that the Primate had in no way wished to express his disrespect for the soldiers, only his opposition to any military conflict.

Perhaps that was the case, but the moment highlighted a growing divide between all other religious faiths in Ukraine, and the Orthodox Church under the Moscow Patriarchate

This is nowhere more pronounced than in Donbas where religious persecution has become a grave problem since the armed conflict began in April 2014.

A study entitled ‘When God becomes the weapon’ has recently been published by the Centre for Civil Liberties and International Partnership for Human Rights.  The authors hope that the evidence they have gathered will serve to ensure that the perpetrators of human rights abuses answer for their deeds and that their victims can seek legal redress in domestic or international courts.

They identify systematic and widespread religious persecution, and also note that religion is one of the key motivating factors and justification cited for criminal activities by unlawful paramilitary groups within the self-proclaimed ‘Donetsk and Luhansk people’s republics’ [hereafter ‘DNR’, ‘LNR’].

It is worth noting that nearly 75% of Ukrainians believe that all religions should be respected.  This is in stark contrast to developments under Russian occupation in Crimea, as well as the ‘DNR’ and ‘LNR’.

Fighting for the ‘Russian World’

The report clearly identifies the major role played by unlawful armed groups who “under the banners of the Russian Orthodox Army and the Cossack Army, openly manifest their adherence to orthodoxy and have begun a ‘crusade’ across the Donbas region’.

This concept of a supposed ‘Russian World’ – encompassing Ukraine, Belarus and Moldova, as well as Russia itself – has been repeatedly endorsed by Russian President Vladimir Putin, and by the head of the Russian Orthodox Church Patriarch Kirill. The latter stated in November 2009, that “if we consider the Russian Federation with its present boundaries, then we have sinned against the historical truth and artificially cut off millions of people who are aware of their role in the fate of the Russian World and consider its creation their main deed.”

Many of the fighters from Russia clearly consider their ‘crusade’ in Ukraine to be part of that patriarch-blessed ‘main deed’.

These armed fighters, and the position of the militants in general, as seen in their ‘constitution’ have had a profound impact on the areas under militant control, with attacks on churches, abductions and torture of representatives of other churches, and the report notes, prohibition of religious practice other than that linked with the Moscow Patriarchate.

Many of the abductions were reported at the time, with the authors of this report having interviewed the victims and heard quite harrowing accounts of their treatment.

Four members of the Sloviansk Evangelical Church of the Transformation were abducted after a Trinity Sunday service on June 8, brutally beaten and killed.  The bodies of the two adult sons of Pastor Alexander – Reuben and Albert Pavenko – and of two deacons – Viktor Brodarsky and Volodymyr Velychko – were later found in a mass grave after the militants fled the city.  Despite all the evidence being against them, Russian propaganda had tried to claim that the men had been murdered by the Ukrainian army for helping ‘insurgents’.

The political nature of the involvement of Russian formations, especially the Cossacks, is highlighted by the account of their other activities.  The report notes that “for several decades Cossacks have been involved in armed conflicts in the post-Soviet areas of Transdniestria, Abkhazia and Serbia.  Nikolai Mitrokhin, a leading researcher on radical movements, calls them right-wing extremists.

The Russian Orthodox Army has as its motto: ““Warriors of the faith, brothers of the Great Russia, we will unite the whole Southeast”,   It was formed in February 2014, under the proclaimed leadership of Igor Girkin (nom de guerre Strelkov), identified by US officials as working for Russia’s GRU military intelligence service.

Position of the Church

The authors of the report note that the Russian Orthodox Church, like the Kremlin, denies any role in stirring up the conflict in Ukraine.  They point however to increasing “evidence of close ties between the Moscow Patriarchate and the pro-Russian cause”.

“Open sources and witness testimony indicate that these armed groups also have local support from the clergy of UOC-MP and the Russian Orthodox Church”.  Examples are provided of some Moscow Patriarchate priests who “have, to varying degree,  supported these illegal paramilitary groups in their campaign against representatives of Protestant, Evangelical and Catholic Churches, and Orthodox believers who do not recognize the Moscow Patriarchate.”

There are individuals in any church or religion and their behaviour cannot necessarily be viewed as representative.

On the other hand, UOC MP has stood apart from all other faiths in Ukraine since the beginning of the conflict.  In March 2014, heads of all faiths except UOC MP, issued a joint statement denouncing the claims in the Russian media of harassment in Ukraine on the basis of language, nationality or religion.  UOC MP also refused to sign a response from the Ukrainian Council of Churches and Religious Organizations to Putin’s request for permission to use Russian troops abroad.  The statement called the deployment of foreign military forces in Ukraine “a threat not only for our country, but for the peace and tranquillity of Europe as a whole”.

If Patriarch Onufriy and his colleagues from UOC MP failed to honour soldiers, including ten who were killed in fighting, on May 8 out of opposition to military conflict, it is quite unclear why the Church under the Moscow Patriarchate refused to sign a statement trying to avoid the use of armed forces.

The reports finds that only believers from Orthodox churches under the Moscow Patriarchate are free from persecution in Donbas, and able to practise their religion.  All others living in the area affected by conflict “are subject to widespread and systematic attack by the rebel groups”.  This is often, but not always, linked with the belief that people of other faiths are pro-Ukrainian.  The Orthodox Church under the Moscow Patriarchate is not only viewed, but even formally established as the ideological foundation and only recognized religion of the militant’s self-proclaimed ‘republic’.   So too is Russian nationalism with ‘Russian World’ mentioned repeatedly in the same ‘constitution’.

The authors of the report consider that the scale and magnitude of the attacks on non-Orthodox believers qualify them as crimes against humanity.  With evidence mounting of Russia’s direct involvement in the conflict, they point out that Russia bears responsibility for both preventing and investigating such crimes.  Since Russia’s involvement at the present time would simply hamper investigation, they call on the Ukrainian authorities to formalize the procedure for giving the International Criminal Court jurisdiction to prosecute crimes against humanity committed on Ukrainian territory.  This, they say, will not only help the victims, but will also help put an end to rampant impunity in the region.