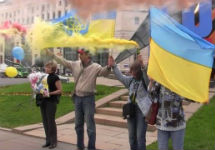 Nine people in Moscow, including two registered as disabled and 75-year-old Vladimir Ionov, are spending the night in jail after being detained at totally peaceful actions marking Nadiya Savchenko’s birthday.  At least two others, in Yekaterinburg, are also being held overnight.  OVDinfo reports that 24 people in all were detained for coming out to wish the imprisoned former military pilot and Ukrainian MP a Happy Birthday.

At least some, though probably all of those held overnight, have been charged with repeated infringement of the rules for holding street actions (Article 20.2 § 8 of the Code of Administrative Offences).

It should be stressed that each of those detained could easily face criminal charges under draconian measures introduced in July 2014.  These introduced steep fines and the possibility of up to 30 days imprisonment, but also allowed for criminal liability  – via a new Article 212.1 of the Criminal Code – if a court handed down a third administrative offence within 180 days.  This means that a person who has only formally infringed the strict rules on holding gatherings three times could be sent to prison for up to 5 years.  Charges have already been laid against Vladimir Ionov under this new clause, yet the 75-year-old refuses to be cowered and is among those reported to have been detained outside the Matrosskaya Tishina prison where Nadiya Savchenko is being held.

Confidence that the police and courts would balk at imposing criminal liability for gathering to wish somebody a happy birthday is probably misplaced given the heavy-handed measures taken against Nadiya’s well-wishers and the journalists there to cover their action.

Grani.ru reports that seven people were detained outside Matrosskaya Tishina, with these including one Ukrainian journalist Anastasia Ringis, who was released after a call to the Ukrainian embassy.

The location for the other Moscow action was appropriate, but guaranteed to cause unhealthy reactions from Russian law enforcement officers.  Six activists unfurled two large Ukrainian flags and a placard reading “Happy Birthday Nadiya!” on Lubyanka Square, near the massive building which now houses the FSB or Russian Security Service.  They had time to set off fireworks and smoke bombs before the police got to them.  Worth noting that the place they were standing is far away from any building, and there was no question that the smoke bombs, etc. could pose any danger.

Two of the six involved in the action managed to flee from the scene, but Vera Lavryoshina, Mikhail Udimov, Sergei Shavshukov and Olga Teryokhina were detained.  So too were three journalists and two women who had simply tried to photograph the action.

All were taken to a nearby police station where all photos and video footage taken by the journalists was wiped, and one journalist’s press card was ripped up.  After an ‘educational chat’, the journalists were released as were the two young women who had simply tried to take photos.

Andrei Margulev, who tried to hold a single-person picket on Manezhnaya Square in the centre was detained. The ploy used was one that began in Soviet times, with a provocateur used to ‘join’ Margulev with this enabling the police to detain him for holding an unauthorized meeting (as opposed to a single-person picket which needs no permission).  Margulev has been charged with holding a public meeting without notification but was released from custody.

Nine people were detained in Yekaterinburg, with two then arrested for 48 hours

There were events throughout Ukraine and in other countries marking Nadiya Savchenko’s 34tth birthday.  Unsurprisingly, no arrests were reported.

Nadiya Savchenko was captured by Kremlin-backed militants in the Luhansk oblast of Ukraine on June 17 last year with the militants even releasing a video of her interrogation on June 20.  She then appeared in a Russian court on July 3 and has been in Russian detention ever since.  Although the Russian pro-Kremlin media have assiduously avoided mention of Savchenko’s capture, the Russian investigators first claimed that she had escaped before trying to enter Russia claiming to be a refugee, and now assert that she was ‘released’ by these kind militants.  After the Parliamentary Assembly of the Council of Europe in late January demanded Savchenko’s release within 24 hours, the Russian Investigative Committee, with its usual blithe disregard for credibility, announced that Nadiya Savchenko was also being charged with “illegally crossing the border”.