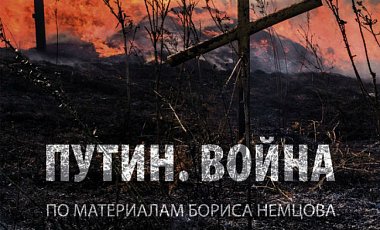 Every word of the report that Boris Nemtsov was gunned down before he could write is damning of Vladimir Putin and his regime, but relatively little of it is new as such, and the key accusations regarding Russia’s direct involvement in Ukraine not seriously in dispute.   Much of it is equally an indictment on the West’s continued insistence on a diplomatic solution in which the Kremlin-backed militants in eastern Ukraine are treated as negotiating partners. The report should also raises questions about the continued failure in the West to understand the danger posed by a warmongering propaganda machine extending far beyond Russia itself.

Saying that there is little new is in no way intended to belittle the authors’ achievement – and their courage -  in publishing a vital source of information, but their real (and stated) audience – Russians – remain deprived of any access to the work.  No mention of the report was made on the vast bulk of Kremlin-loyal media on Tuesday, with all nationwide channels on May 12 simply continuing their  warmongering distortions about the war in Donbas and Ukraine.  The same media, incidentally,  reported German Chancellor Angela Merkel’s visit to Moscow on May 10, but failed to mention her description of Russia’s annexation of Crimea as “criminal”.

Most of the headlines about the May 12 presentation of the work initiated by Boris Nemtsov and finished by his associates, refer to ‘allegations’ about 10 thousand Russian soldiers in Ukraine.  It is excellent that the figure is mentioned, but it has been already – by NATO, by Igor Sutyagin in an important paper published by the Royal United Services Institute.

Who is in charge of Donbas?

As with all parts of the study, the chapter under this title provides nothing staggeringly new, although it does demonstrate that behind closed doors, western leaders have recognized that the official leaders of the so-called ‘Donetsk and Luhansk people’s republics’ [hereafter ‘DNR’ and ‘LNR’] are required only to sign documents.

The report points to the key roles played by Russians in the leadership of the so-called ‘republics’, especially at the beginning. Alexander Borodai, a PR specialist known for his extreme nationalist views, often expressed on the pages of the ultra-nationalist newspaper ‘Zavtra’, long held the post of ‘DNR prime minister’.  The report mentions also Marat Bashkirov who held an analogous position in ‘LNR’ and is described as a political consultant “collaborating with the Russian government (more details here).

The report mentions other Russian citizens having played a key role in organizing the armed confrontation with the local authorities in Donbas, but focuses mainly on Igor Girkin (nom de guerre Strelkov) who is referred to here as a retired Russian Security Service officer.  Back in June 2014, US officials reported that Girkin was working for Russia’s GRU military intelligence service.  Girkin is known to have taken part in Russia’s operation to annex Crimea and went on to form an armed unit of separatists in Sloviansk.

The report notes that Borodai and Girkin have known each other for a long time.  Both at one stage worked for the Marshall Capital Fund owned by Russian businessmen Konstantin Malofeyev whom Ukraine believes to be one of the main sponsors of the fighters in eastern Ukraine.

Borodai has never concealed  the fact that he was regularly in Moscow and coordinated his activities in Ukraine with Russian officials.  The report quotes him talking about the support ‘DNR’ receives from Putin’s aide Vladislav Surkov and ending: “without exaggeration, Surkov is our man in the Kremlin”  (no link is given, but the original appears to have been an interview given to ‘Aktualniye kommentarii’)

The authors point out also that Denis Pushilin’s ‘resignation’ as speaker of the ‘DNR parliament’ was written from Moscow.

They are dismissive of the ‘republics’’ declarations of sovereignty, saying that they are in fact governed from Moscow and key decisions are dependent on Russian officials and political spin doctors.

“Staffing reserves for ‘DNR’ and ‘LNR’ are often provided by socio-political projects, directly linked with the Kremlin.”

They mention Pavel Karpov in ‘LNR’ who previously worked for the Russian president’s administration on work with nationalist organizations, as well as Leonid Simulin who previously worked in the pro-Kremlin organization ‘Mestniye’ [‘Locals’].  Simulin appears in the testimony of members of the neo-Nazi BORN group guilty of a number of high-profile killings which they believed were committed with Kremlin authorization.  There is plenty of evidence of other Russians holding leading positions in the so-called ‘republics’ (here, for example).  There are also clear links between Ukrainian pro-Russian activists and training courses organized by Russian fascist ideologue Alexander Dugin with support from the president’s administration and specifically Surkov).  Anton Shekhovtsov has identified at least five such people involved in the ‘republics’.

Girkin acknowledges that he was pushed out of ‘DNR’ under pressure from the Kremlin.  “I can’t say that I left voluntarily.  They threatened to stop supplies from Russia and without supplies it’s impossible to fight”.  He claimed in January 2015 that the focus moved to peace negotiations and they needed people more willing to come to agreements.  Here Borodai who ceased his role in August was more honest. The report quotes him saying that “there would come a time when a fragile semblance of peace would be needed” and it would look terrible if he and Girkin, as Russians, took part in the Minsk talks.

The authors are convinced that it is specifically Surkov who has played a key role in the external control of the ‘people’s republics’ by the Kremlin.  “Formally he is in charge of cooperation with Abkhazia and South Ossetia, but even back when being appointed Presidential Aide in Autumn 2013, it became known that Ukraine would also be one of his areas of interest”.

“The Kremlin policy in relation to ‘DNR’ and ‘LNR’ is extremely secretive and non-transparent. However the facts of direct regulation of policy of these supposedly ‘independent’ republics are impossible to hide. We are effectively talking about the creation in the east of Ukraine of pseudo-states governed from Moscow and being essentially a mechanism for putting pressure on Kyiv”.

The chapter ends with a telling detail about the Minsk II agreement and how after a night of negotiating between the leaders of Russia, Ukraine, France and Germany, there was a hiccup when the two current leaders of the ‘republics’ – Alexander Zakharchenko and Igor Plotnitsky – refused to sign a document that could mean their political (if not physical) death.  Putin asserted a few times that he couldn’t pressure them, Merkel and French President Francois Hollande made it clear that they weren’t accepting this, and that the signatures needed to be provided within one and a half hours.  Two minutes before the deadline Putin appeared and said that Surkov had phoned to say they’d signed everything.

The Report Putin. War is a devastating attack on the current Kremlin leadership, and sets out in exhaustive detail Moscow’s culpability for the carnage and destruction in eastern Ukraine, as well as for its aggression in Crimea.   It is no surprise that the Russian media make no mention of the report.  It is however frustrating that they will instead be reporting the assurances given by US Secretary of State on Tuesday evening.  John Kerry is reported to have said that whoever instigated the fighting in Ukraine, it has gone on too long, and that if the Minsk agreement is implemented, the west will begin rolling back its sanctions from Russia.   According to the report made public just hours earlier, 70 Russian soldiers died in the Russian – militant fighting that took place immediately after the Minsk II agreement was reached and culminated in seizure of the strategic town of Debaltseve.  Aside from a few expressions of ‘concern’, little was said of that or further encroachments since by the militants.  Crimea has so far been omitted from all agreements, and it would now appear that all parties, save Ukraine, are willing to be dangerously flexible as to what they term ‘implementation’.