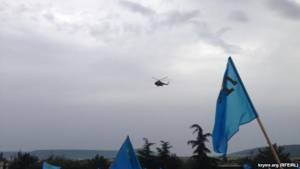 Russian military helicopters circled the Bakchysarai remembrance gathering in 2014, after the occupation regime tried to ban all gatherings

The occupation authorities’ alleged ‘new format’ for commemorative events on May 18, the anniversary of the 1944 Deportation of the entire Crimean Tatar People is so far following the repressive patterns seen since Russia’s annexation.  Two members of the Mejlis, or Crimean Tatar representative assembly, have received formal prosecutor’s warnings and armed enforcement officers were reported to have set up roadblocks in one district, with officers also seen near a mosque and entering Crimean Tatar homes.

Nariman Dzhelyal, First Deputy Head of the Mejlis, was the first to be issued a warning over the remembrance events.  The document claims that the (now exiled) Head of the Mejlis Refat Chubarov and (now imprisoned) Deputy Head Akhtem Chiygoz last year “called on Crimean Tatars to carry out unlawful and extremist actions which resulted in many facing legal liability. Since Dzhelyal is now the most high-ranking representative of the Mejlis, it is he who is being warned against repetition of such “mistakes”, he explained.

What occupation regime prosecutor Natalya Poklonskaya described as “unlawful and extremist actions” was in fact the reaction on May 3, 2014 to Russia’s ban on 71-year-old veteran Crimean Tatar leader Mustafa Dzhemiliev entering his homeland.  Around 5 thousand Crimean Tatars arrived at the Armyansk border crossing with mainland Ukraine to greet Dzhemiliev and accompany him to his home in Simferopol.  As well as Poklonskaya, there were large contingents of Russian soldiers and OMON riot police, and Mustafa Dzhemiliev returned to Kyiv specifically to avoid bloodshed.  This did not prevent numerous administrative charges against participants, and then, after 6 months, criminal proceedings resulting in numerous arrests and armed searches of homes, mosques and religious schools.

Later on Thursday, another member of the Mejlis Dilâver Akiev was also issued with a warning.  He writes:  “It appears I’m one of 14 radical members of the Mejlis of the Crimean Tatar People and our PLAN is to use the official refusal by the Simferopol administration as one of the main arguments in organizing unauthorized actions, and also to discredit Russia on the international stage as cases of violation of the rights of the Crimean Tatar people ».

Both men have reiterated that no unauthorized meetings are planned.  Akiev will, however, be seeking legal means of appealing against this “warning”.

As reported, the authorities have for the second year banned the traditional remembrance gathering in the centre of Simferopol.  This time they are speaking of a ‘new format’ for the anniversary and claim that this is aimed at ‘de-politicizing’ the anniversary.  Any suggestion that Crimean Tatars used the anniversary for political ends has been categorically rejected by, among others, Ilmi Umerov, another Deputy Head of the Mejlis.  He stresses that there were always formal wreath-laying ceremonies, requiems, readings, lessons in school, etc. around the anniversary but the main event – in memory of the victims of the Deportation was always the remembrance gathering in the centre of Simferopol.

The new accusations by the authorities are also seriously weakened by the fact that other excuses have already been tried both this year, and when all events were stopped in May 2014, soon after Russia’s annexation.

In April 2015, for example, Dmitry Polonsky, first deputy Crimean prime minister proposed that the “cult” of May 18 should be stopped and Crimeans should instead celebrate a "day of joy".  This was to some extent tried on May 3 when the authorities effectively hijacked the Spring Festival Hyrdyrlez.  Despite pressure put on public sector workers to appear, the numbers attending were very small.

On the eve of the seventieth anniversary in 2014, Sergei Aksyonov, Crimean leader installed after Russia’s invasion,  announced a blanket ban on all public gatherings until the day before Russian Language Day which was celebrated with great fanfare.

Aksyonov is now saying that he wants the date to have a “new meaning”, with all Crimean official bodies taking part in commemorative measures.  “We must think about the future, think how to build a qualitatively new life for the Crimean Tatar people in a multi-ethnic family of Crimeans ».

As the anniversary approaches, it seems clear that there is nothing at all new about this changed “format”.  It is almost certainly no coincidence that armed police were again stopping people near a market and mosque, and individuals are being named as responsible for ensuring attendance at official state-endorsed events.  Such measures lack any credibility in light of the serious offensive underway against the Mejlis, ongoing infringements of Crimean Tatar rights, and the fact that for the second year the occupation regime is preventing Crimean Tatars from gathering to remember the victims of a heinous crime in which nearly half the Crimean Tatar people died.