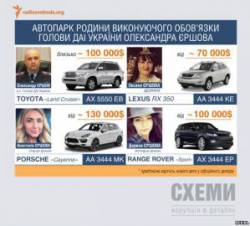 Interior Minister Arsen Avakov has just been forced to remove a second police associate after a damning report exposed fiddled records and the head of Ukraine’s traffic police living it up in style.  Worryingly, he has promised only an "internal inquiry" into the extremely serious allegations

The results of the journalist investigation by Serhiy Andrushko and Natalya Sedletska were published on May 19, and the terse message on Avakov’s Facebook page appeared that same evening indicating that the scandalous report, together with photos, had been noticed.  Avakov writes that he has accepted the resignation of Oleksandr Yershov from his post as Acting Head of Ukraine’s Traffic Police [DAI] and that an internal inquiry has been appointed over “issues raised recently in the press”.

The investigation is part of a joint project ‘Schemy: Corruption in Detail’ run by the First National TV Channel and Radio Svoboda.  The team of investigative journalists, the site says, seeks “to name those guilty, bring all to answer who steal public funding, property and resources, abuse power for their own personal enrichment and protect corrupt officials through their neglect and inaction.”

On this occasion, Sedletska and Andrushko focused their attention on the Traffic Police Head and the sumptuous lifestyle, they assert, is led by him and his family.   The authors begin by announcing that Yershov’s family have a luxurious lifestyle with a collection of elite cars, and his daughters have holidayed in ten different countries over the last 6 months.

The report states that Yershov previously classified as secret the income declarations of all traffic police management and refused to show the declaration to  Radio Svoboda, this being in breach of the Law on Access to Public Information.  In 2013 he declared around 12 thousand UAH per month (at the time not much more than 1 thousand EUR).

It has to be said that some of the information was handed to the journalists on a platter, with Yershov’s two daughters being entirely open on their VKontakte social network pages.  Their photo of themselves in fashionable clothes and accompanying texts make it clear that they have travelled recently to 10 different countries.  Nor were they backpacking: they appear to have flown business class and stayed in 5-star hotels. .

The information about the family’s formidable array of cars took a bit more effort to ferret out.  The vehicles, including the Porsche Cayenne driven by one daughter and Range Rover by the other are visible enough on the roads, but not in the traffic police records.  Each of the cars is worth around 100 thousand US dollars, but the LEXUS RX-350 driven by Yershov’s wife is registered as his elder daughter’s second car, and a year ago the younger daughter posted a photo of her Range Rover calling it a present.  The trouble is that the traffic police records have a totally different car under the same number plate – a 2008 SsangYoung registered as belonging to a Latvian national whom the journalists name.

Only one vehicle is recorded on Yershov’s declaration, however he also rides an expensive motorbike.  The number plate for this differs in just one element from that for his car, which would not be a problem except that the traffic police records say that the vehicle under that number is a KAMAS truck.

There are other vehicles owned by Yershov’s close relatives, for example, his mother and brother both have Land Cruisers.

The journalists exposed major discrepancies between Yershov’s 2013 declaration and his actual lifestyle.  A three-storey building in Kyiv was totally omitted, and the declaration mentioned only one car.  Yershov claimed to Radio Svoboda that the building and land belong to his wife, and that his daughters have a totally separate life, their business and he “does not interfere”.

The land on which this substantial family home is built was apparently allocated to his wife back in 2008, and the family are known to live there together with all their vehicles.

Avakov only appointed Yershov as Acting Head of the Traffic Police on April 4, 2015.  The scandalous disclosures are therefore highly embarrassing, especially given that Yershov was no newcomer to the police, having previously headed the traffic police in the Kharkiv oblast.

This is also not the only scandal in recent weeks.

On May 14, Avakov’s deputy Serhiy Chebotar was forced to resign after a scandal involving an attack on investigative journalists from the TV ZIK programme ‘Nashi hroshi’ [‘Our Money]].  They were set upon by the security guards when they tried to photograph a large house they believed to belong to Chebotar.  The journalists called the police and filed a formal complaint.

On that occasion, the Deputy Minister denied the journalists’ claims and was shown to have been creative with the truth when ZIK published the document from the land registry body proving that the building is registered in his wife’s name.

At least one other police appointment by Avakov has aroused concern, though for different reasons. In November 2014, Avakov appointed Vadim Troyan head of the Kyiv regional police despite the latter’s links with “Patriot of Ukraine”, an organization with a very shady past and neo-Nazi views.  Troyan has denied any recent connections though there appear cogent reasons for questioning this.

It is cheering that investigative journalists are now able to scrutinize public officials’ income declarations and any whiff of corruption.  Under the presidency of Viktor Yanukovych court after court blocked access to information about the sumptuous mansions, etc. of high-ranking officials, asserting their right to privacy or similar.  Yanukovych’s own declarations with the figures of around 14 million UAH declared for two years in a row as ’royalties’ for books never written received a few sarcastic comments in Ukraine, no more.  It is also a positive sign that the scandals that emerge are provoking response and dismissals of those implicated.

Greater confidence in law enforcement bodies and in their ministry’s commitment to eradicating corruption would be ensured by avoidance of appointments so disturbingly open to scandalous exposures.