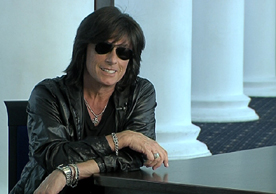 A day after Crimean Tatars were prevented from gathering in memory of victims of the Deportation, with some even detained and facing charges, US rock musician Joe Lynn Turner saw fit to give a concert in Sevastopol.

Most information about the former Deep Purple and Rainbow vocalist is, typically, coming from pro-Kremlin media for whom any such tour is a propaganda coup.  Russia’s Pyervy Kanal, for example, quotes the aging musician as saying: that he was always above rules, and went his own way.  “I’m above all that”, he said.

At least 20 Crimean Tatars are now facing charges after around 60 people were detained while trying to honour the memory of the victims of the 1944 Deportation of the entire Crimean Tatar People.  The traditional remembrance gathering was prohibited, and many Crimean Tatars were in any case marking the anniversary in forced exile including 71-year-old Crimean Tatar leader Mustafa Dzhemiliev who was 6 months old when he and his people were forced driven from their homeland.  Under Russian occupation he has again been banished.  Turner is presumably also ‘above’ thoughts about the young Crimean Tatars and Ukrainian activists who were abducted or simply disappeared without trace, the Crimeans long in detention, facing absurd charges, and constant threats and accusations of ‘extremism’.

Two months ago, Serbian musician Goran Bregović also gave a concert in Sevastopol where he praised Russia’s greatness and expressed the hope that the West would be “cured of its paranoia”.  After the concert on March 26, Bregović was asked by journalists if he was not frightened of a boycott.  He answered that he was totally unbothered by sanctions.

“I don’t care.  At any rate, in the Balkans we have always felt the greatness which comes from the east from Russia.  I think that the West has always expressed some kind of paranoia about this.  I hope it will pass and they’ll come up with some kind of medicine against it.”

The concerts scheduled in mainland Ukraine were immediately cancelled, and Poland also reacted promptly with Bregović’s scheduled appearance at the Life Festival Oświęcim, in southern Poland in June 2015 cancelled.

Joe Lynn Turner is far less known in Europe, however the appearance of any musician in Russian-occupied Crimea is an affront to all those who have opposed Russia’s annexation of their homeland, and especially the ever-increasing number of people facing serious repression.

Please help ensure that this musician and all others understand that they cannot be “above’ fundamental solidarity with those facing persecution and that any such propaganda gifts to Russia will have serious consequences for their careers.