Almost no support for militant ‘republics’ in Donbas cities 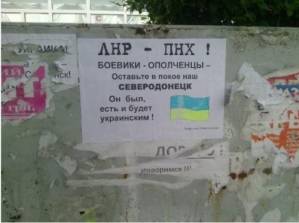 Leaflets circulated in Severodonetsk after it came under attack from militants in July 2014, telling them to leave the city in peace. “It is and will remain Ukrainian”

A recent survey in two Luhansk oblast cities has found virtually no support for independence of the self-proclaimed ‘Luhansk and Donetsk people’s republics’ [‘LNR’, ‘DPR’, respectively], or for joining Russia.  A majority view Russia as a party to the military conflict and want the Ukrainian military to remain in their city.

The latest survey was carried out in Severodonetsk and Starobilsk from March to April by the authoritative Democratic Initiatives Foundation [DIF] and the Ukrainian Sociological Service, as well as by volunteers and civic activists.  It followed a similar survey in the two Donetsk oblast cities of Sloviansk and Kramatorsk reported here.

Both surveys highlighted major differences between cities that are geographically close to one another and show, as DIF Director Iryna Bekeshkina points out, that the idea of a single Donbas identity is fundamentally wrong.

There were important differences with Severodonetsk having been both under ‘LNR’ occupation and suffered from military action, whereas Starobilsk had not been directly affected.

In both cities the greatest fear was of renewed fighting (79% in Severodonetsk; 77% in Starobilsk).  In Severodonetsk which had been under the militants, 36% said that they feared the returned of the self-proclaimed ‘LNR’, and 22% Russian invasion.  Only 34% mentioned non-payment of pensions and salary against 58% in Starobilsk.

Moscow has consistently claimed that Ukraine is discriminating against Russian speakers.  Fear of this was expressed by only 1% of Severodonetsk residents and not mentioned at all by those in Starobilsk.

Who is to blame?

There were interesting differences in opinion between those in Starobilsk which had not been under militant control and Severodonetsk.  In the latter city, 39% blame Russia for the tragic events in Donbas; the former regime of Viktor Yanukovych (38%) while only 16% see the current Ukrainian leadership as responsible.

In both cities the majority see their city as part of Ukraine (Severodonetsk – 64%; Starobilsk – 67%).  However in Severodonetsk the majority believe the region should have greater independence from Kyiv and broader powers, whereas in Starobilsk they want to retain the status quo.

Less than 1% of both cities support the independence of the self-proclaimed ‘republics’.  Only 2% of people in Starobilsk would want to join Russia, and 5% in Severodonetsk.

62% of people in Severodonetsk view Russia as a party to the conflict in the East of the country, against 53% in Starobilsk. Majorities of those who name Russia as party believe that their engagement involvements mainly providing weapons, but also in the participation of Russian armed forces.

61% in both cities want Ukrainian soldiers to remain with Severodonetsk residents wanting this presence to be permanent, in Starobilsk only until the situation stabilizes.   Starobilsk residents were more inclined to name factors that they viewed as inconvenient in the soldiers’ presence, whereas in Severodonetsk which had lived under militant occupation a hefty 72% saw no problems.

These results are broadly similar to those from the above-mentioned DIF survey in Sloviansk and Kramatorsk, but do reveal interesting differences, especially in the degree to which Russian propaganda about ‘Ukrainian nationalists’ and discrimination of Russian speakers does not seem to be taken seriously.  Back in November 2014, DIF was reporting that a third of Donbas residents saw ‘Ukrainian nationalism’ as what divided Ukrainians.  A proper comparison would need to be carried out to ascertain whether the difference is due to the time that has passed, or perhaps the degree to which Russian propaganda channels pushed out all other media from the cities.  It was certainly the case from April 2014 that one of the first things the militants did when seizing control of a city was to cut off all Ukrainian channels and other media, replacing them with Russian.

The findings are particularly interesting in the light of the reasons given by the Kremlin-backed militants for suspending their ‘Novorossiya’ plans.  The declared suspension was almost certainly dictated from Moscow and there are varying interpretations of the motives.  Clearly, however, the acknowledgement that the plans had not received sufficient support in the Kharkiv and Odesa oblasts did not go far enough.  It appears support in Donetsk and Luhansk oblast cities is also extremely limited.