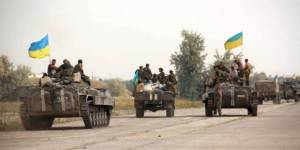 Human rights activists have not disputed Ukraine’s derogation of certain  international obligations, adopted in parliament’s May 21 resolution, but are critical of previous laws regarding the area of military conflict.  Some, such as the possibility of 30 day detention without a court order cannot be considered proportionate, and no resolution on derogation will change that.

249 MPs voted on May 21 for the Resolution on Derogation of Certain Obligations under the International Covenant on Civil and Political Rights and the Convention for the Protection of Human Rights and Fundamental Freedoms.

In an interview given to the Deutsche Welle Ukrainian Service, Tetyana Mazur, Director of Amnesty International in Ukraine called the move an “entirely logical step.  If you don’t have physical access to territory on Russian-annexed Crimea or in Donbas, then of course Ukraine cannot guarantee or defend human rights.”

The resolution she and other activists stress is about preventing judgements against Ukraine at the European Court of Human Rights.  All consider the move to be belated.  The resolution should have been passed in November last year after President Petro Poroshenko signed the relevant decree.   One concern raised among rights activists is that the resolution does not clearly define the area of its application.  It can also only be valid if Ukraine has a legitimate reason for derogating its obligations, namely that it cannot physically fulfil them since the territory is not under their control.  The ATO zone covers more than areas directly under the control of Kremlin-backed militants.

Volodymyr Yavorsky from the board of the Ukrainian Helsinki Human Rights Union does not believe the resolution’s impact should be over-estimated.  While agreeing that the resolution is belated and needed, he stresses that it is of limited force. Any international body will consider the specific situation, the degree to which Ukraine was in a position to safeguard rights.

Oleksandra Matviychuk, head of the Centre for Civil Liberties is critical of previous laws, in particular, amendments to the Law on Fighting Terrorism and some others.  These pertain to pre-trial investigations in the ATO zone, changes in territorial jurisdiction, and curfews.

She points out that human rights organizations slammed those amendments when they were being drawn up.  Restrictions of rights may be required “in conditions of hybrid war against Russia”, but these must be proportionate, and achieve the set aim without creating scope for abuse.  A year on and all their concerns have been proven well-founded.

As reported here, in August 2014 the President signed laws which give the prosecutor much broader powers under martial law, a state of emergency or in areas where an anti-terrorist operation [ATO] is underway and enable prevention detention of terrorism suspects of up to 30 days.

Draft law 4311a  gives the Prosecutor power to authorize searches, wiretapping or even detention without a court order.  The bill is in breach of a number of provisions in Ukraine’s Constitution (29; 30; 31) while Article 64 makes it clear that these rights may not be restricted even under martial law, etc.  At the time, Yavorsky warned that evidence obtained under such circumstances could not legally form the basis of a later conviction.  Even if domestic courts allowed the evidence, he said, Ukraine would be unlikely to win a case over this at the European Court of Human Rights.

Draft bill No. 4312a  introduced amendments to the law on fighting terrorism enabling people to be detained for up to 30 days without a court order.

The decision to carry out such detention on warranted suspicion that the person has committed terrorist acts would be taken by the head of the central division or a division of the SBU [Security Service] or Interior Ministry in the Crimea; the relevant oblast or Kyiv and Sevastopol.  This would be with the agreement of the prosecutor but without a court order.  A copy of the decision would be handed to the detainee, and immediately passed to the investigative judge, and court of the relevant jurisdiction together with an application for a preventive measure to be chosen.  Preventive detention cannot continue after the investigative judge, court has considered the application.

The apparent safeguards that the latter details give are probably largely theoretical and  would be unlikely to stop people being detained without the court’s OK for up to 30 days.  Another bill passed at the same time extended the powers of the police in the ATO region.

These laws, it should be remembered, were adopted despite the lack of vital reforms to all  law enforcement bodies.

Tetyana Mazur specifically referred to the possibility of detention without a court order for 30 days.  While some kind of measure may be required in conditions of ATO, 30 days cannot be considered proportionate, she said, mentioning also that AI is aware of arbitrary detentions in eastern Ukraine.

Both Mazur and Matviychuk stress the need for Ukraine to finally ratify the Rome Statute.

“That step would make it possible for Ukraine to join the International Criminal Court. That in turn would restrain sides to the conflict from carrying out military crimes and would provide significantly more incentive for Ukraine’s law enforcement system to properly investigate military crimes”, Mazur explained.   She also pointed out that in its latest report, published on Friday, AI writes that it has evidence of torture of prisoners by both sides of the conflict.

The allegations have been vehemently denied by both Ukraine’s SBU and Right Sector and it is much to be hoped that they can prove them to be unwarranted.  Ukraine’s leaders could surely demonstrate that they have nothing to fear from examination, and help protect the country from the crimes being committed by Kremlin-backed militants and Russia’s aggression by finally ratifying the Rome Statute. That is also long overdue.