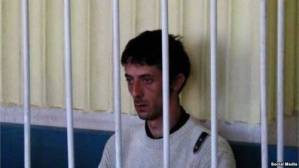 A Russian court has refused to terminate the trial of veteran Crimean Tatar leader Mustafa Dzhemiliev’s son Khaiser, despite a verdict and sentence having been passed on the 33-year-old Ukrainian national by a Ukrainian court and his extradition requested. The judge’s ‘argument’ was that there had been no verdict from a Russian court.

Khaiser Dzhemiliev’s lawyer Nikolai Polozov points out that Russia’s own Criminal Code (Article 12 § 3) makes it clear that a sentence passed in Ukraine is sufficient grounds for terminating his client’s prosecution in Russia.  Furthermore, in Russia, just as in Ukraine and other countries, a person cannot be tried twice on the same charges.  This is enshrined in Russia’s Constitution (Article 50 § 1, with Article 62 § 3 of the same document indicating that this applies also to foreign nationals).

At the court hearing, Polozov produced a copy of the court sentence passed on Dzhemiliev by a district court in Kyiv on April 10, 2015.  Khaiser Dzhemiliev was found guilty of manslaughter; theft of a weapon and ammunition and illegal possession of both.  He was sentenced to 3 years and 8 months imprisonment, with this counted from the day of his arrest  – May 27, 2013.  The sentence was not appealed and has now come into force.  Ukraine has since lodged an application for his extradition which has thus far not been answered.

The sentence was in full accord with the previous rulings from Ukrainian courts from early 2014 which reinstated the original charges of manslaughter and ordered Khaiser’s release from custody.  This order was then confirmed by the European Court of Human Rights which on July 10, 2014 applied Rule 39, ordering that Dzhemiliev be freed. Despite the binding nature of all rulings and decisions from the Court in Strasbourg, Russia has not only failed to comply, but has moved Khaiser to Krasnodar in Russia and already begun his trial.  The prosecution has ignored the charges laid back at the time of the tragic shooting in May 2013 of manslaughter through carelessness and is accusing Khaiser of ‘murder out of hooligan motives”’.

This refusal to terminate the proceedings despite the sentence already passed is surely further confirmation of Mustafa Dzhemiliev’s statement that the Kremlin is applying open blackmail in holding his son in prison.  The 71-year-old Crimean Tatar leader, whom Russia has banned from entering his homeland or Russia and who can therefore not even see his son, has from the outset been implacably opposed to Russia’s invasion and annexation of Crimea.

It was the regime of Viktor Yanukovych back in 2013 that first threatened that if Mustafa Dzhemiliev did not go along with them, his son would be charged with murder, not manslaughter. This use of court prosecutions as a method of hostage-taking is now being continued by Russia. .

In May 2013 Khaiser Dzhemiliev shot and killed Fevzi Edemov who was working as a guard to the family.  All the evidence pointed to manslaughter, and all attempts to later claim murder attempts to bring pressure to bear on Khaiser’s father who holds considerable authority among Crimean Tatars, in Ukraine and the world.

As with the ongoing detention and charges against film director Oleg Sentsov and civic activist Oleksandr Kolchenko, Russia has taken Ukrainian nationals by force to Russia and claimed that they have become citizens of Russia.  In the prosecution of Sentsov and Kolchenko, there was no terrorism at all to warrant the charges.  Khaiser Dzhemiliev committed an offence, but he did so under Ukrainian rule and Ukrainian legislation. However after a Ukrainian court sentenced him, Russian Judge Vladimir Kobzev could find nothing better to justify the Kremlin’s hostage holding than to say that the Ukrainian verdict was “not Russian”.

The Ukrainian court acted in accordance with law.